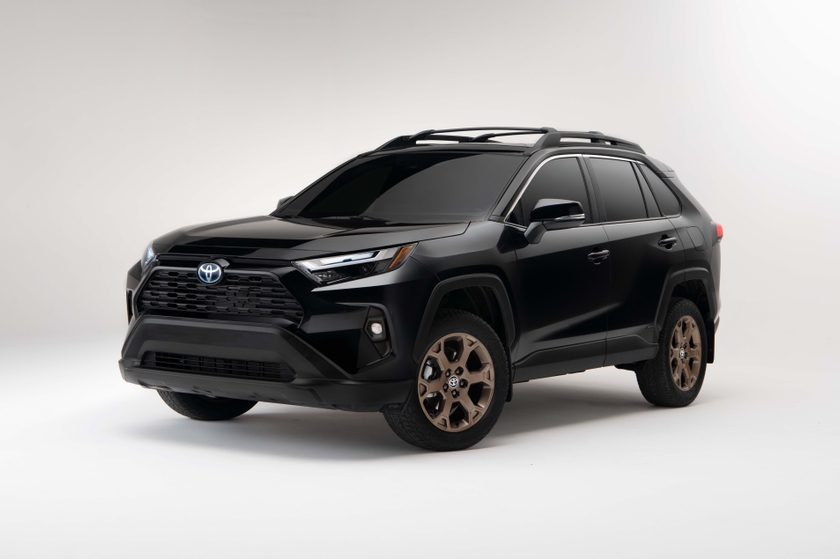 Designed with a focus on versatility and efficiency, the RAV4 Hybrid Woodland Edition also comes standard with Falken WILDPEAK AT tires for optimal off-roading, raised black roof rack cross bars to pack an array of supplies for a weekend camping trip and a 120V inverter to power-up an array of compatible household items for a short-day trip or an overnight camping excursion. Other mentionable standard features include:

And with the roominess to fit people, pets and recreational gear – the RAV4 Hybrid Woodland Edition also comes standard with features like LED projector-beam headlights and integrated fog lights. Handy storage abounds in the RAV4 Hybrid, including the console’s large volume, side-by-side cup holders, and an open tray capable of holding small items. In addition, an in-dash tray within easy reach of the front passenger can hold electronics, sunglasses, and other travel must-haves. Rear seat passengers will appreciate the spacious cabin. The rear cargo area features a reversible cargo floor insert as well as side nets for storing small items. The 60/40 folding rear seats easily expand the rear cargo area.

Engineered to tackle urban, suburban and outdoor adventures, the fifth generation RAV4 is built on Toyota New Global Architecture (TNGA-K) platform. With a boldly chiseled design inspired by Toyota’s tough trucks, this latest RAV4 amplifies the desirable crossover traits that made the first RAV4 an instant success a quarter-century ago. Depending on model grade and options, the current RAV4 can be whatever the customer needs it to be, from the exceptionally well equipped LE model to a technology tour de force plug-in hybrid, with various levels of luxury and adventure in between.

In any RAV4 Hybrid, the Toyota Hybrid System II (THS II) works in sync with the 2.5-litre 4-cylinder Dynamic Force Engine to make the hybrid models performance and efficiency leaders of the RAV4 family. It is truly the no-compromise compact SUV.

In the hybrid models, a Continuously Variable Transmission (CVT) is exclusively paired with an Electronic All-Wheel Drive system (AWD), making it possible to operate at all vehicle speeds. An improvement from previous generation, the rear axle motor operates proactively anytime rear torque would be beneficial to keep the vehicle on the driver’s intended line, or when conditions get slippery. The AWD system uses an independent electric motor at the rear wheels, rather than a torque-distribution system in the transmission and additional driveshaft to the rear.

RAV4 for 2023 will receive some updates across all trims, as well. For 2023, all RAV4 models have the new Toyota Multimedia system.

Thanks to the Toyota Multimedia system designed and engineered in North America by Toyota’s Connected Technologies team, RAV4 drivers will be at the ready thanks to a wide range of enhanced connectivity and convenience features, including being Over-the-Air (OTA) updatable. Users can interact with the system through intuitive touch and voice activation controls. With the available Drive Connect trial or subscription, drivers and passengers have access to Intelligent Assistant, Cloud Navigation and Destination Assist. With Intelligent Assistant, simple phrases like “Hey Toyota” awaken the system for natural voice commands to search for directions, find Points of Interest (POI), adjust audio controls, change the cabin temperatures and more. Cloud Navigation, the available onboard navigation solution, utilizes the cloud to download the latest available map, traffic and routing information. To ensure users have the most up-to-date search capabilities, POI search is provided by Google Points-of-Interest (POI) data. Destination Assist also gives access to 24/7 live agent assistance to locate the next destination.

The 2023 RAV4 comes standard with Toyota Safety Sense 2.5, Toyota’s suite of active safety systems. It includes Pre-Collision System with Pedestrian Detection that features enhancements over the previous generation, including the ability to detect an oncoming vehicle or a pedestrian at intersections when making a turn. The Pre-Collision System is designed to detect vehicles, pedestrians and bicyclists and provide audio/visual alerts and automatic braking in certain conditions. Emergency steering assist is an additional function designed to detect pedestrians and stabilize the driver’s emergency evasive steering maneuvers and help prevent lane departure.

TSS 2.5 on RAV4 also includes Full-Speed Range Dynamic Radar Cruise Control (DRCC). Lane Departure Alert is designed to notify the driver via audible alert if it senses the vehicle is leaving the lane without engaging a turn signal. When DRCC is set and engaged, Lane Tracing Assist is designed to assist the driver by providing a slight steering force to help centre the vehicle in its lane using visible lane markers or a preceding vehicle.

In addition to the TSS 2.5 system, other standard safety features include Blind Spot Monitor, which is designed to help detect and warn you of vehicles approaching or positioned in the adjacent lanes. Rear Cross Traffic Alert can offer added peace of mind by helping to detect vehicles approaching from either side while backing out and alerting you with a visual and audible warning. Front and Rear Parking Assist with Automatic Braking is designed to provide warning and if needed, implement brake control when there’s a possibility of a collision with a stationary object or an approaching vehicle while parking. In addition to TSS 2.5, the RAV4 Hybrid Woodland Edition is equipped with Toyota’s Star Safety System, which includes Enhanced Vehicle Stability Control (VSC), Traction Control (TRAC), Electronic Brake-force Distribution (EBD), Brake Assist (BA), Anti-lock Braking System (ABS), and Smart Stop Technology (SST). Available safety technologies include Blind Spot Monitor (BSM) with Rear Cross Traffic Alert (RCTA), Bird’s Eye View Camera, Intelligent Clearance Sonar (ICS), and Rear Cross Traffic Braking (RCTB) system.

Toyota’s Rear Seat Reminder also comes standard on RAV4. The feature can note whether a rear door was opened within 10 minutes of the vehicle being turned on, or at any time after the vehicle has been turned on, with a reminder message in the instrument cluster after the engine is turned off, accompanied by multitone chimes.

Pricing for the 2023 RAV4 will be announced later and models will be available at Toyota dealerships later this year.