Beyond Possible: The Sky’s The Limit For The All-New 2016 Prius At Las Vegas World Premiere Event 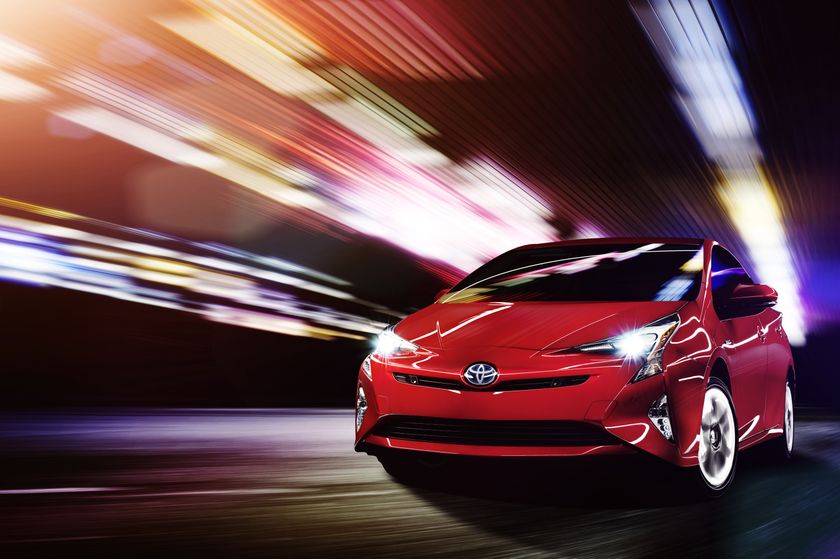 (LAS VEGAS – September 8, 2015) The same vehicle that pioneered the hybrid category just disrupted the status quo again. The all-new, fourth-generation Prius starred in a spectacular evening production of music, food and special effects to celebrate an industry icon in a way that was anything but expected.

More than 350 journalists, social influencers and Toyota guests watched the all-new 2016 Prius elevate into the Las Vegas night sky. After almost twenty years of shaping the world view on alternative energy vehicles, and more than 3.5 million global sales, Prius is setting out to change the world again.

But it’s not just about fuel efficiency anymore. Today’s customers want all the traditional benefits of a hybrid, but don’t want to compromise on looks and performance. So Toyota upgraded the Prius inside and out to deliver the complete package - emotional styling, smarter technology and impressive fuel efficiency, in a vehicle that’s more fun to drive than ever.

“As we launch the new Prius, this ambassador for the future moves beyond the rational advantages of hybrid power – to engage Canadians with bold styling and driving fun,” said Larry Hutchinson, Vice President at Toyota Canada Inc. “The 2016 Prius is ready to invite more Canadians to become hybrid drivers, with its impressive looks and dynamic handling – even as it continues to deliver remarkable fuel efficiency and environmental responsibility.”

Easy on the Eyes

The Prius’ exterior has been completely reimagined. From the side, it is longer and sleeker with the overall outline evoking an athletic shape. Inspired by a runner in the starting blocks, the sporty design conveys a feeling of forward motion.

The hood is lower and the distinctive roof peak has been moved forward. Bold character lines run along the side from the front fenders – one just above the sill that sweeps up towards the rear fender, while the upper crease morphs into the rear spoiler, which has been lowered.

The use of new standard LED headlamps minimizes the Prius’ front fascia and, at the same time, provides an arresting lighting display which helps define the vehicle’s character. The unique and striking rear combination lamps express the distinctive lines of the Prius from the rear spoiler to the trailing edges of the sides.

Once inside, drivers will feel immediately comfortable and impressed by styling cues that are unique in the industry. The wide instrument panel, seamlessly designed to be both functional and beautiful, gives a sense of comfort and spaciousness. Available premium white ornamentation in the lower sections of the cabin is reminiscent of fine bone china.

Efficient Development from the Start

The 2016 Prius is the first global vehicle to implement Toyota’s New Global Architecture (TNGA). TNGA aims to greatly improve core vehicle performance and enhance product appeal through an integrated development program for powertrain components and vehicle platforms. Development of vehicles is being grouped to promote strategic sharing of components with the goal of improving resource efficiency by better than twenty percent. Resources will be directed into developing advanced technologies, and most importantly even further strengthening product appeal.

Engineered from the ground up, the new Prius is 2.4 inches longer (61mm), 0.6 inches wider (15mm) and 0.8 inches lower (20mm) than the model it replaces, providing a planted on-road presence while delivering more occupant and cargo room.

Hallmarks of TNGA, a lower center of gravity and a more responsive suspension package, dial up the driving excitement. In fact, the height of the Prius’ front badge is exactly the same as that of Scion’s FR-S sports car – a remarkable achievement in height and mass reduction.

The all-new rear double wishbone suspension produces a better connection to the road, providing greater control and feedback in all driving conditions. A more rigid body helps improve responsiveness while cornering. From winding mountain roads to the wide boulevards downtown, the new Prius stays connected to the road, without sacrificing ride quality and occupant comfort.

Available on the new Prius, Toyota aims to make Toyota Safety Sense available across nearly the entire vehicle lineup by the end of 2017.

Setting the Stage for the Future of Mobility

It started in 1992 with a vision for the future – mobility in harmony with society. Prius, which means “to go before” changed the way we move about the world, and changed the automotive industry forever. More than two decades and over 8 million Toyota hybrid sales later, the all-new, no compromises 2016 Prius stands side by side with its sibling, the hydrogen powered Mirai, poised to change the game yet again. The new Prius will arrive in dealerships early next year.