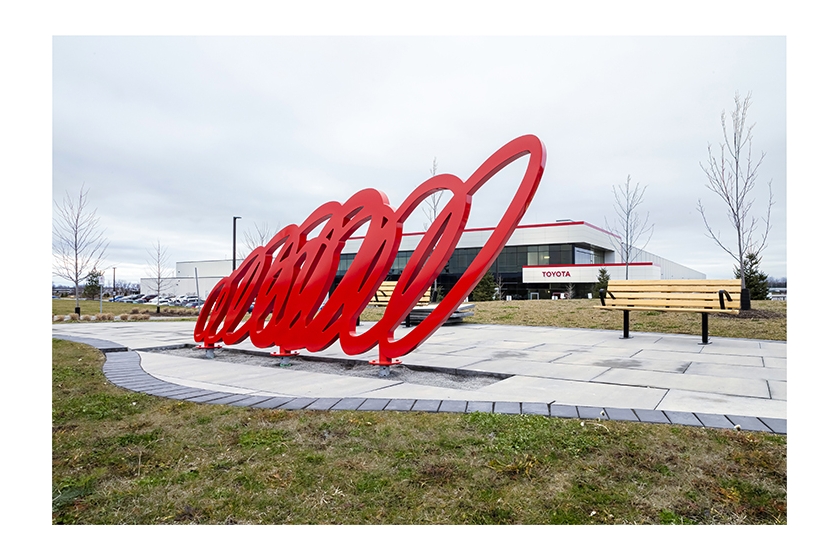 CLARINGTON, Ontario – December 14, 2022 – Toyota Canada has unveiled a creative new addition to its already remarkable Eastern Canada Parts Distribution Centre (ECPDC) in Bowmanville. Momentum – a colourful sculpture on the front lawn of the building near the corner of Baseline Road and Lambs Road – is Clarington’s newest public artwork.

The 14-foot long, six-foot high sculpture represents the idea of forward movement and progress. The artist’s concept considered both the idea of physical motion and mobility, as well as the social progress represented by the building’s inclusive physical accessibility and advanced environmental sustainability.

“We’re excited to have this stunning new public artwork, not only to welcome visitors to our facility, but for the enjoyment of anyone who happens to be passing by,” said Tony Kelly, Vice President, Customer Services at Toyota Canada. “We’re even more proud that the artist has created a physical piece of art that recognizes our company’s commitment to mobility and social progress, both of which are represented in this building.”

After a request for proposal supported by the Visual Arts Centre of Clarington, Toyota commissioned Niall McClelland, a multi-disciplinary Canadian artist who brings together abstraction and design in his work, to create the piece. Experienced in various creative outputs, some of McClelland’s other work includes public commissions for the Toronto Raptors OVO Athletic Centre, CAMH and Etobicoke General Hospital.

“I was thrilled to have the opportunity to create public art for the community of Clarington in partnership with Toyota Canada,” said McClelland. “My goal in creating this piece was to capture forward motion, like that of moving wheels, in both the physical and metaphorical sense. The exaggerated forward momentum and bright colour was an attempt at keeping its design simple, yet playful. It’s my hope this sculpture resonates with those who visit and drive by as a symbol of progress.”

Toyota Canada’s ECPDC recently received Zero Carbon Building – Design™ certification from the Canada Green Building Council, making it one of the most environmentally sustainable buildings of its kind in the country. The facility has also recently been certified as a LEED® Gold building under the LEED® green building rating system.

The ECPDC is also a symbol of Toyota’s global commitment to creating a more inclusive society where everyone can move freely, and has received the Rick Hansen Foundation’s ‘Gold’ level accessibility certification, making it one of the most physically accessible buildings of its kind in Canada.