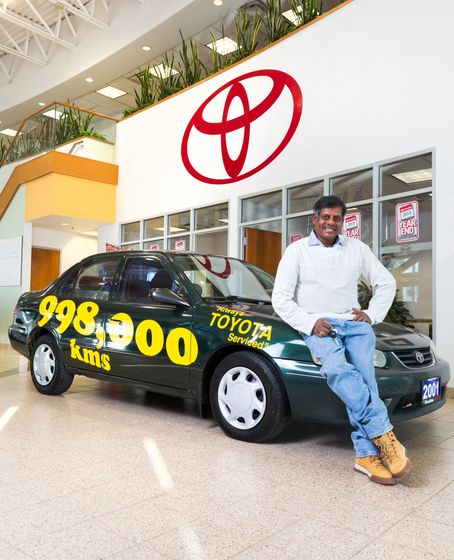 Brampton driving school owner, Rajah Sellathurai, poses with his well-made, well-serviced, well-loved 2001 Toyota Corolla he drove just shy of a million kilometres, on display at Woodbine Toyota.
Tours Toyota’s Cambridge manufacturing facility where his well-made, well-serviced, well-loved 2001 model was built
TORONTO, ON., (December 4, 2013) – Not long after Rajah Sellathurai moved from India to Canada more than three decades ago, a friend gave him a suggestion about purchasing a car. Buy a Toyota, Rajah was advised, because they are reliable and last a long time.
Rajah heeded the advice and bought a Tercel, enjoying all 540,000 kilometres he put on it. Then he tried a Corolla – and has been fiercely loyal to the model ever since. Having just purchased his sixth Corolla a couple of months ago, he cumulatively drove his previous five Corollas more than three million total kilometres. That includes almost one million (998,000 km to be precise) on his cherished green 2001 model.
Rajah’s love affair with his car came full circle today when he visited Toyota’s Cambridge manufacturing facility where his 2001 model was made, met with Brian Krinock, President, Toyota Motor Manufacturing Canada (TMMC) and toured the plant with some of the team responsible for creating his Corolla.
The made-in-Canada Corolla is the world’s number-one selling nameplate of all time, with more than 1.3 million sold to date in Canada. It is celebrating its 25th anniversary of being manufactured in this country in 2013, with more than 80 per cent of the Corollas sold still on the road today.
“The Corolla has always been – and always will be – synonymous with quality, durability, reliability and lasting value,” said Brian Krinock, President, TMMC. “We are so thrilled to hear of Mr. Sellathurai’s great experience with his Corolla. Credit goes to the 7,000 Canadians employed at TMMC, many of whom work on this exceptional car, as well as our other outstanding made-in-Canada models.”
Rajah – who said he loves how the Corolla is as safe as it is durable – relies on his car to the tune of about 300-350 kilometres a day. Having traded in his previous Corolla for a new red 2013 model in August, he has already put about 20,000 kilometres on it. Each day, he drives it from his Brampton home to his driving school in Orangeville. It’s used all day long as he teaches students with it, before he commutes back home again.
After seeing what the Corolla has done for Rajah, the three other driving instructors he employs also decided to purchase the iconic model, so all of them now have Corollas that are about six or seven years old, with 400,000-500,000 kilometres logged on each of them. What’s more, whenever students have seen Rajah’s eye-popping odometers, they too realize that the Corolla is a smart choice and often make it their first vehicle purchase – whether new or pre-owned.
When asked what the key is to having his 2001 Corolla reach about one million kilometres, Rajah said it’s really quite simple.
“I am very strict about never missing an appointment for regular maintenance and I always take it to a Toyota dealership,” said the father of two grown children. “It never would have lasted so long going somewhere else.”
“This is a great example of Toyota’s service in action,” said Tony Kelly, Vice President, Toyota Canada Inc. “Almost a million kilometres is an amazing milestone to hit and validates our philosophy that no one services your Toyota vehicle better than Toyota-trained parts and service technicians.”
Rajah explained that he never intended to keep his 2001 model for one million kilometres – once it hit 500,000 he just kept telling himself he’d keep it for another hundred thousand, but it just kept going and he never had any issues with it other than the tires wearing out.
Finally, he decided that 12 years was long enough, and it was time for a change.
“I didn’t really have to get a new one – I could have easily gotten another 500,000 more kilometres from it,” he laughed, adding that as much as he loves his new Corolla for all the advantages it has – such as the latest technology features, more room and greater comfort – he misses his beloved 2001 model.
“But I get to see it whenever I take my new Corolla in for servicing,” he said, noting that he bought his new car from Woodbine Toyota, which still has his previous green vehicle on site so he can look at it nostalgically while his new car is serviced. “Eventually, I’ll grow just as attached to my new one because I expect to get one million kilometres from it too.”
With all the driving involved at work, his Corolla gets a break at vacation time. That’s when Rajah and his wife travel with their daughter – so they can all enjoy her 2009 Toyota 4Runner.
“She’s a lawyer who only has a short drive to work so I think it would take her about 40 years to get one million kilometres on it,” he joked. 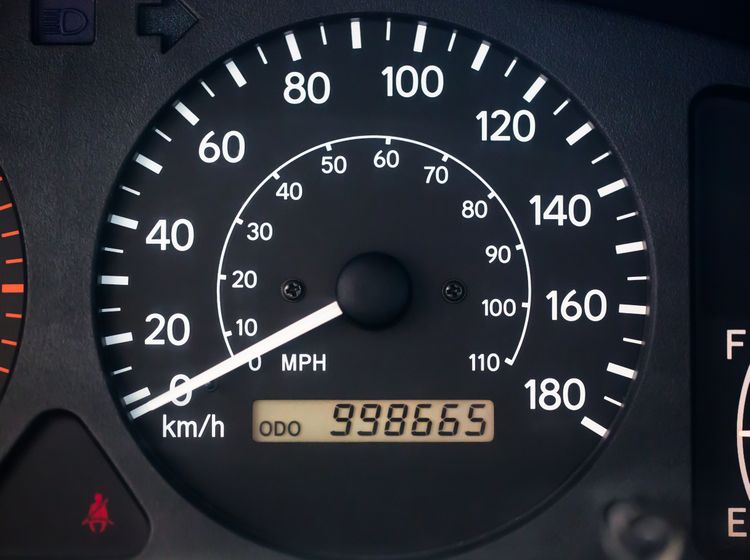