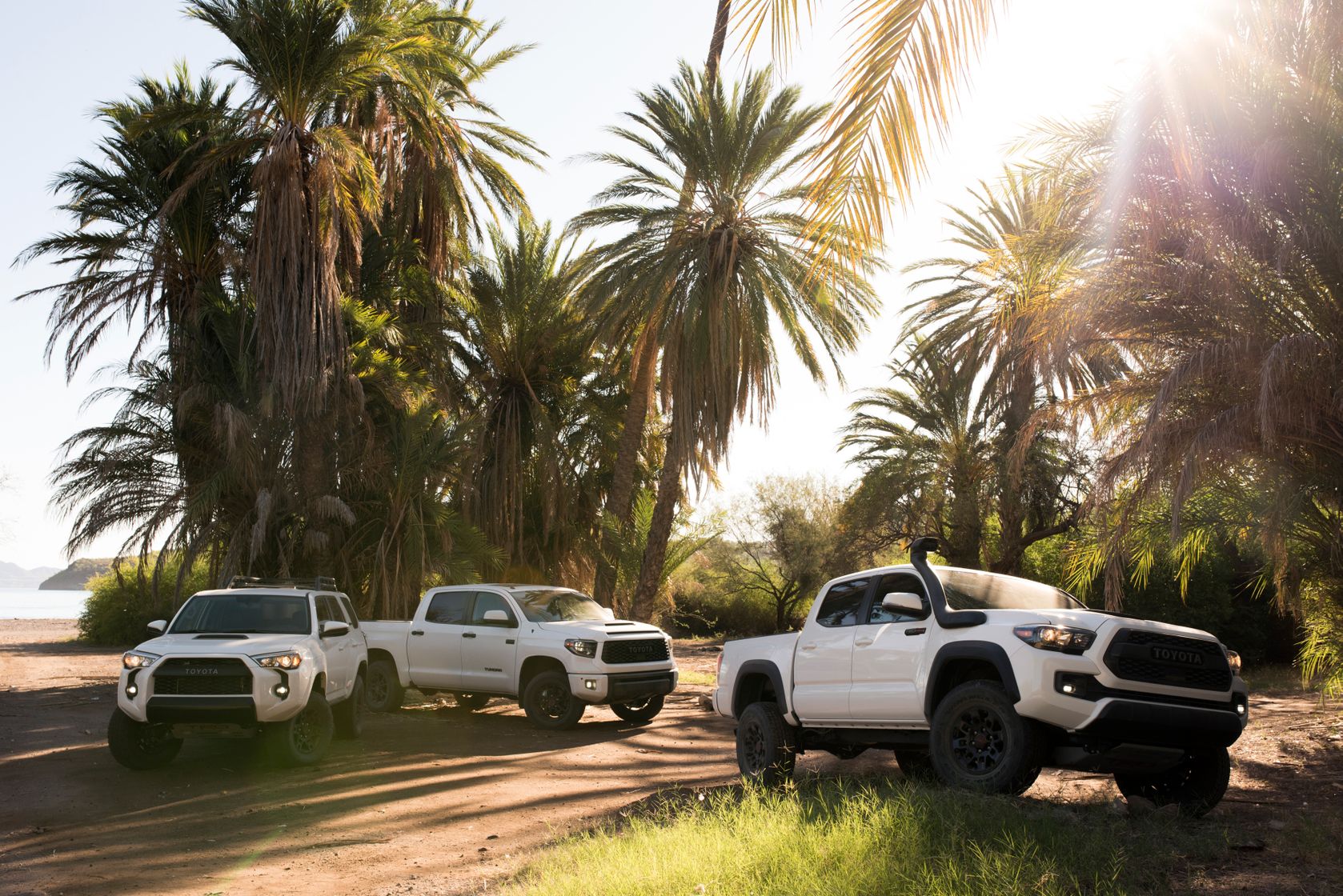 TORONTO, ONTARIO, February 8, 2018 – The pulse-pounding, heart-racing TRD Pro Series from Toyota returns for its next generation of off-road dominance. . For 2019, Tundra, 4Runner and Tacoma will all feature Fox shocks and a host of impressive off-road equipment tuned and designed by the engineers at Toyota Racing Development (TRD).

First unveiled in 2015 in Canada, the TRD Pro lineup was born from Toyota’s rich racing and off-road heritage. All TRD Pro vehicles offer unique styling, as well as highly capable, tried and tested performance off-road equipment, specifically tailored for when the pavement runs out.

The 2019 TRD Pro series will be available in fall of 2018, and each vehicle will be offered in three colours that include Super White, Midnight Black Metallic or Voodoo Blue (a TRD Pro exclusive colour).

Wanna go off the beaten path? TRD Pro is the ultimate tool to get you there and back.

Only as Good as Your Suspension

As any seasoned adventurer knows, a true off-road vehicle is only as good as its suspension. For 2019, the entire TRD Pro family rides on 2.5-inch TRD Pro-exclusive Fox Internal Bypass shocks. Tuned specifically for each vehicle by the engineers at TRD, the aluminum-bodied Fox shocks offer impressive performance and supreme damping for a wide variety of driving situations. High-speed desert running, slow-speed rock crawling, or simply driving to and from work – drivers and passengers will be as comfortable as they are confident.

Whereas off-road race vehicles traditionally have external bypass tubes on their shock bodies to fine-tune damping pressure, each high-tech Fox shock compactly incorporates bypass zones inside of the shock. These multiple bypass zones offer a cushioned, plush ride during typical operation but get progressively stiffer through the shock stroke to provide excellent bottoming resistance.

The front shocks are paired with specially-tuned TRD springs designed for excellent ride comfort and to also produce additional lift, giving each TRD Pro an aggressive, heightened stance for improved trail-conquering capability. A combination of high-temperature shock fluid and nitrogen gas pressure are employed inside each Fox shock to improve bump compliance and to help maximize seal life.

Based on the very trail-capable TRD Off-Road grade, Tacoma TRD Pro ups the ante with enhanced 2.5-inch Fox front shocks that use a large 46mm piston and feature 8 bypass zones (5 compression, 3 rebound). They are paired with TRD-tuned springs that provide an additional 1 inch of front lift. A larger front sway bar is employed to retain crisp steering and refined road manners. The Tacoma also features 2.5-inch rear shocks that use 11 bypass zones (7 compression, 4 rebound) and are paired with2-inch piggyback reservoirs.

A host of additional TRD equipment finds its way onto the new Tacoma TRD Pro, including an updated front skid plate with TRD red lettering while the cat-back TRD exhaust is accented with a new Black Chrome tip.

Thanks to the offset of the 16-inch TRD Pro black alloy wheels, Tacoma has a 1-inch wider track both front and rear for added stability. Trail and pavement traction comes in the form of P265/70R16 Goodyear Wrangler Kevlar All-Terrain tires.

The most eye-catching of the Tacoma upgrades, no doubt, is the all-new TRD Desert Air Intake. Designed to sustain consistent off-road performance no matter how silty or dirty the terrain gets, the TRD Desert Air Intake takes the 278-horsepower 3.5L V6 engine’s air intake away from dust that hovers inside the wheel well (where traditional air intakes are located) during off-road operation. This allows for air ingestion to occur in a cleaner space above the windshield, therefore benefiting filter longevity, and, ultimately, engine health.

Taking a cue from little brother, big bro Tundra gets new Rigid Industries LED fog lights for improved visibility on and off the highway, in a variety of weather conditions. Tundra also features LED headlights with LED accent lights and a unique black treatment. A new TOYOTA grille, plus, new hood scoop, add style to Tundra’s brawny front end. Out back, TRD Pro stamping is found on the bed’s rear quarter panels.

New 18-inch BBS forged-aluminum, five-spoke satin black wheels are featured on the Tundra, which reduce un-sprung mass 3.35 lbs. per wheel (13.4 lbs. total) to improve cornering response and overall ride quality. The new wheels are wrapped in Michelin P275/65R18 all-terrain tires to provide a sure footing in dirt and on pavement.

4Runner needs no introduction. The iconic SUV is one of the most legendary off-road vehicles in Toyota’s history. For 2019, TRD Pro takes 4Runner’s world-renowned trail capability to the next level.

4Runner’s Fox shocks not only enhance its off-road performance, but paired with the TRD-tuned front springs, the package lifts its front 1 inch compared to other grades, while also providing nearly 1 inch of additional wheel travel. The 2.5-inch front shocks employ 46 mm pistons and include 7 bypass zones (4 compression, 3 rebound). In the rear, the 2.5-inch Fox shocks feature 11 bypass zones (7 compression, 4 rebound) to fine-tune the low- and high-speed compression, and 2-inch piggyback reservoirs house additional oil to retain damping performance when it’s needed most. A unique TRD roost shield offers additional protection for the inverted shock design in the rear.

Even on the Most Capable, Safety is Paramount