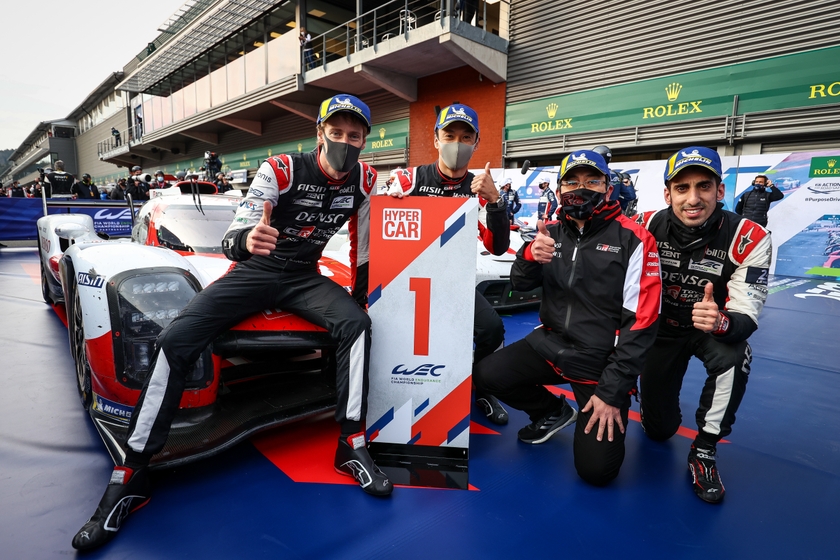 TORONTO, ONTARIO – May 3, 2021 –TOYOTA GAZOO Racing began the Hypercar era in the FIA World Endurance Championship (WEC) with a landmark victory in the Total 6 Hours of Spa-Francorchamps following an exciting start to the 2021 season in Belgium.

Sébastien Buemi, Kazuki Nakajima and Brendon Hartley earned a place in the record books by winning in the #8 GR010 HYBRID after a dramatic and tense battle at the front, overcoming a close challenge from the #36 Alpine in second and their own team-mates in the #7 car.

In an incident-packed race, the Hypercars fought relentless from the off. World Champions Mike Conway, Kamui Kobayashi and José María López started from pole position in their #7 GR010 HYBRID and had challenged for victory but finished third following several setbacks.

Today’s result marks TOYOTA GAZOO Racing’s fifth consecutive win in Belgium as it begins its challenge for a hat-trick of World Championships.

When the green flags waved to begin WEC’s new era, Mike led the 31-car field, with Sébastien closely behind over the opening laps. The #8 took the lead on lap 11 and the pair of GR010 HYBRIDs were hotly pursued by the #36 Alpine.

As the first pit stops approached, the race took its first dramatic turn. Mike brought the #7 into the pits and lost time when the car did not leave cleanly, before Sébastien visited the pits a lap later.

At the end of that stop, the fuel nozzle was removed from the #8 before the 35secs minimum refuelling time had elapsed, breaking a new regulation and resulting in a 30-second penalty, taken at the car’s next pit stop, when Brendon took the wheel.

With the #7 requiring a fluid refill when Mike handed over to José, the #36 Alpine took over at the front. At half distance, José was closing in and just a few seconds behind, with Brendon further back in the third-placed #8.

The exciting Hypercar battle showed no sign of easing off, and neither did the drama. Jose made contact with a GT car, slightly damaging the front bodywork. Then with just under two hours remaining, the #7 slid off track and became stuck in the gravel, requiring a rescue vehicle to recover it before he resumed in third.

That left Kazuki in the #8 hunting down the #36 Alpine for the lead, while Kamui suffered a further setback when the #7 was given a drive-through penalty for the earlier contact with a GT car.

Following the final Hypercar fuel stops, Sébastien in the leading #8 had a modest cushion of around a minute over the Alpine and he brought the car safely to the chequered flag to win by 1min 7.196secs from the #36, with Kamui bringing the #7 home one lap behind.

Battle will resume for Hypercar honours in Portugal next month, when the inaugural 8 Hours of Portimao takes place on 13 June.

“This year the FIA World Endurance Championship has introduced the Hypercar class, which is strongly related to high-end road going sports cars. To compete in that class, TOYOTA GAZOO Racing introduced a brand-new race car, the GR010 HYBRID.

In the qualifying session, taking place over just one lap, Kamui Kobayashi in car #7 demonstrated the speed of this car with an astonishing lap of 2:00.747. After starting from pole position, Mike, Kamui and José behind the wheel of car #7 finally finished 3rd on the podium following several setbacks, while Sébastien, Kazuki and Brendon, driving car #8, showed the strength of the GR010 HYBRID by winning the race after an exciting six hours.

During our very first race, nobody knew what would happen. I really would like to say thank you to all six drivers and the team members for raising our expectations about the big potential speed and strength of this car.

On the other hand, we must keep searching for more reliability and security, as well as more speed and strength; we must continuously improve these factors in the future because the season continues and the Le Mans 24 Hours is coming.

I would like all team members to continue this way of making cars that can keep running on any roads. And I would like to deliver the technology which has been developed and honed on this car to our customers.

To all our fans, thank you for your support and encouragement during our first round of WEC 2021. I hope you will be watching our journey of making ever-better cars with TOYOTA GAZOO Racing. Thank you very much.”

“What a dramatic and unpredictable start to this new era for our team. We all hope that Hypercar will become an extremely competitive class and this race lived up to the expectations of fans around the world. Thanks to WEC and the race organisers for giving us an opportunity to race safely despite the global situation. We faced several difficulties but thanks to a big effort from the mechanics, engineers and drivers we began this new chapter in endurance racing in the centre of the podium. Despite the challenges this week, the team never gave up and Kamui really showed this spirit when he overtook the race leader just a few laps after being stuck in the gravel. Today was a strong start for our next generation of Racing Hybrid technology but we are still learning and improving with our GR010 HYBRID. It has not been the smoothest week for the team at Spa, but this has highlighted areas to improve so we will work hard to do this before the next race, and particularly before Le Mans.”

“It is tough to take that result today because we were looking pretty solid halfway through the race. Unfortunately, a couple of things happened and it took us out of contention. We might have been okay with only the drive-through but when we lost a lap due to Kamui’s incident, we knew that a podium was the best we could achieve. It’s disappointing because we wanted to start the defence of our World Championship with a win and we had been doing well. Congratulations to car #8 for a strong performance and well done to the team for winning on the GR010 HYBRID’s debut.”

“That was a difficult race for our car, despite a promising start. During my incident, I locked the tyres but managed to avoid hitting anything. Unfortunately, I couldn’t reverse because I got stuck in the gravel, so I had to wait for the rescue car to get me back on track. It was a pity because we had the pace and were in a good position to win. We had a few issues today and it’s clear we are still learning how to get the maximum out of the GR010 HYBRID. It looks like we have the performance, but we need to get better in some areas.”

“First of all, I am really happy for the team. After ups and downs this week, even in the race, it was important that we started the season with two cars on the podium and a win for TOYOTA GAZOO Racing. Well done to car #8 who did a great job. On our side of the garage we felt we had the pace to win and we managed to pull out a little advantage. We had a couple of problems that changed our race and I regret the contact I had with the GT car. That was a tricky situation. So, there is a lot to learn from today. We take the positive from this race, which is that we had the speed to win, and we will keep fighting.”

“It feels great to win the first race of the Hypercar era. Obviously, there was a lot of pressure on our shoulders. Car #7 had pole position and it is amazing that we managed to get the win with car #8; I am really happy that we managed that. It was a big challenge and the team has worked really hard in the last few weeks with lots of testing. It was a well-earned victory from everyone. But we also know that we need to improve on a lot of different aspects, and this is just the start. Now is time to celebrate a little bit before we quickly go back to working hard because there is lots to do.”

“I am very proud to win the first race of Hypercar for TOYOTA GAZOO Racing. I think as a team we did a really good job in the race. Congratulations to all of our car crew, and all of the team. The race was tricky for us, we had some ups and downs, but as a driving crew we did what we needed to do. It was so easy to make a mistake because the traffic was difficult to manage and we had strong competition from Alpine and even some of the LMP2s. We couldn’t afford to make any mistakes, so I am happy to have done our job well. It’s a great achievement.”

“It’s a great feeling to start this new Hypercar era with a victory. It didn’t come without some challenges but in the end, we delivered the right result. As a driver crew we didn’t make any mistakes and we were learning on every single lap. We continue to improve our understanding of the GR010 HYBRID, how we deal with double stints with this car and the traffic management, which is very different than with the previous car. All I can say is that we are very happy with the first victory. It was a proper race, it was a challenge, but it was a lot of fun.”