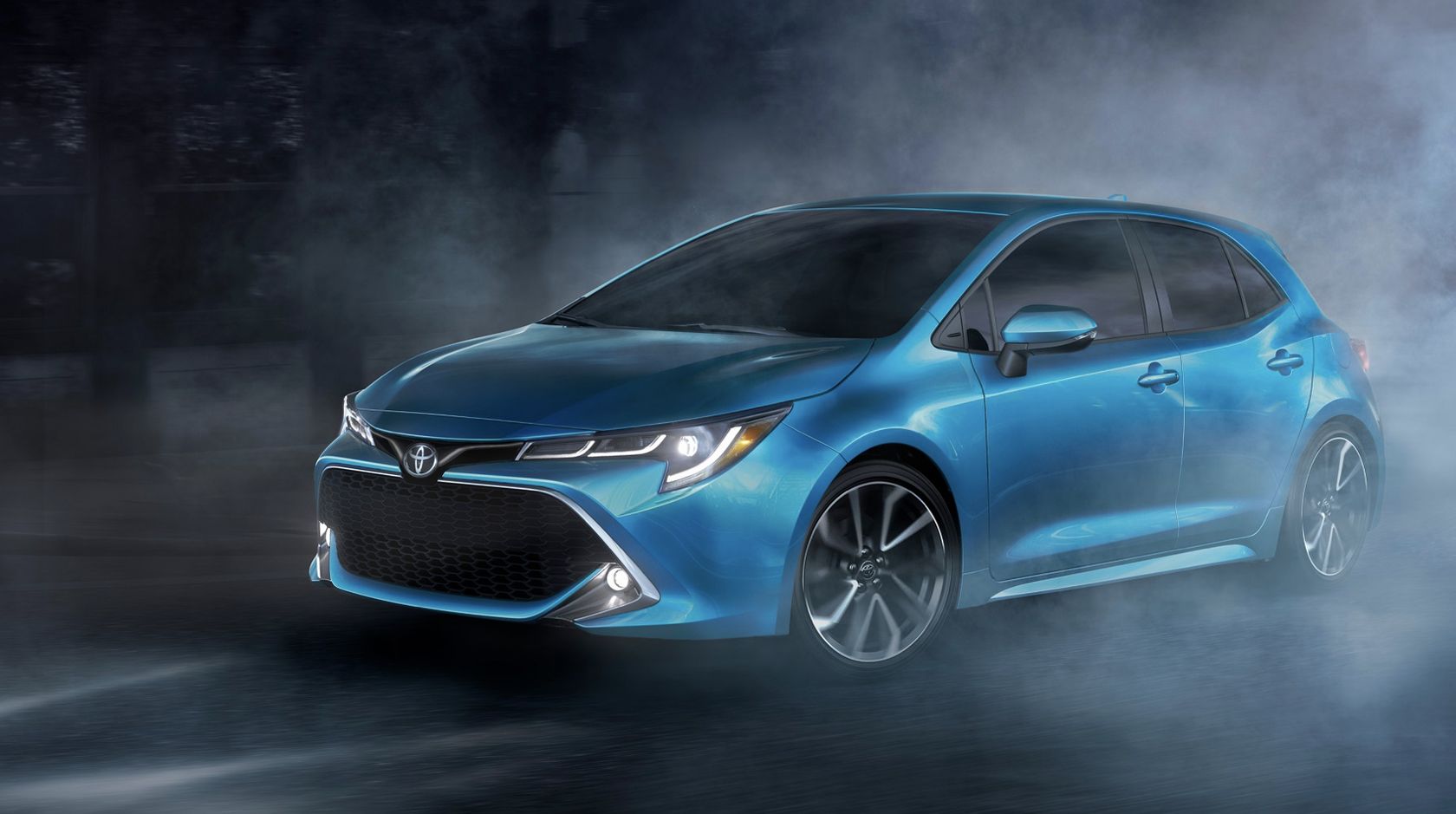 TORONTO, ONTARIO, March 23, 2018 – Talk about going big in the Big Apple! For the first time in North America, Toyota’s newest, stylish, and most technologically-advanced compact car in the world, the all-new 2019 Corolla Hatchback, makes its debut at the New York International Auto Show.

Don’t let its diminutive dimensions fool you – the hatchback, in either S, SE or XSE grades, is all about making a huge impression. With its lengthy list of standard features that includes Entune 3.0 with Apple CarPlay; a revised sport-tuned suspension and new Toyota New Global Architecture (TNGA) platform; and the first North American application of Toyota Safety Sense 2.0, Corolla Hatchback strikes a resounding chord with drivers who value authenticity, utility, practicality, and style.

Corolla Hatchback has flair extraordinaire. With a theme of Shooting Robust, along with a design goal of Agile, influencing their every pen stroke, designers created a form that is simultaneously distinct, dynamic, muscular, and sophisticated. Shooting references the design’s sport coupe traits implemented in all facets.

With those concepts in mind, Corolla Hatchback is a meticulously mixed cocktail of emotive lines, creases, and surfaces. It’s lower (by 25 mm), wider (by 30 mm), and longer (by 40 mm) than its predecessor, Corolla iM. It also has wider front and rear tracks, and a longer wheelbase.

Its hood sits 47 mm lower than before, affording passengers excellent forward visibility. The new frontal styling with a rounded nose and trapezoidal-shaped under grille is a further evolution of Toyota’s Under Priority Catamaran and Keen Look design philosophies, both of which emphasize Corolla Hatchback’s increased width.

Slim, J-shaped Bi-Beam LED headlamps wrap deep into the front fenders and accent the front in both stylishness and precise illumination. Front overhang has been cut by 20 mm; at the rear, it’s 20 mm longer. Chiseled character lines at its profile link both ends’ protruding flanks making for an active, well-planted expression that is uncommon amongst its peers. Wheel sizes range from 15-inches to 18-inches in diameter.

Its new rear style articulates Corolla Hatchback’s overarching emphasis on athletic presence. The relationship between front and rear design is closely aligned given the rear’s more rounded physique that encompasses simple, condensed, yet powerful, three-dimensional landscapes. Its hatch – now made from TSOP (Toyota Super Olefin Polymer) and ABS (Acrylonitrile Butadiene Styrene) – is not only lightweight to aid fuel efficiency, it is set at a steeper angle (moved 14 degrees forward) for that ultimate sporty look. The rear all-LED taillamps feature a diffusing inner lens designed to highlight the hatchback’s stout stance. And the rear bumper styling echoes the frontal Under Priority Catamaran design with its thin lower lip and chrome diffuser.

In addition to being wider, the centre console is also longer to accommodate a larger variety of passenger physiques and comfort preferences. It incorporates a centre tray ahead of the gearshift that can hold small items such as a smartphone or wallet, or if outfitted, serves as the Qi wireless device charging area. A 140 mm smartphone can easily fit inside the centre console box.

High-gloss materials are paired with matte elements – silver accents with Piano Black and available contrasting stitching – to best accentuate a premium look and feel. The elimination of unnecessarily lettering on switchgear, plus, the unification of all materials’ and elements’ shape, colour, grain, and gloss, maximize continuity and aesthetic cleanliness. Tactility, too, is minded with the utmost consideration. Keen eyes will appreciate the minimized gaps between buttons and switches; again, furthering Corolla Hatchback’s sophisticated character.

Front passengers’ hip points are lower (to 275 mm), and cushioning has been revised, which provides a more natural body posture and position for ideal access to the multifunction steering wheel, pedals, and gearshift. Such optimized seating allows passengers to enjoy Corolla Hatchback’s thrilling dynamics all the better. Front door storage solutions include cup holders capable of accommodating 750 ml bottles and A4-sized documents. Not to be outdone, rear seats utilize updated cushioning to improve comfort and minimize fatigue. Furthering their convenience are upper door cup holders that accommodate 470 ml bottles.

Qi Wireless Charging is also available on SE Upgrade and standard on XSE. Rounding off Corolla Hatchback’s connectivity are two USB terminals (located inside the centre console and instrument panel) and one AUX port (located on instrument panel).

Corolla Hatchback’s seamless unification of comfort and sporty controllability begins at its TNGA C platform. The compact structure employs a mixture of adhesives, spot welding, and additional bracing – top to bottom, side to side – for the benefits of driver controllability and low fuel consumption. On-road feel and fuel efficiency is further refined through the extensive use of aluminum and high- and ultra-high tensile steel in the lighter weight chassis and body. In fact, torsional rigidity is improved a massive 60 percent compared to its predecessor.

At the Corolla Hatchback’s rear multi-link suspension with stabilizer bar, responsiveness is sharpened through updated shock absorbers and springs, and like the front, geometry is slightly modified. Lower arm locations have moved (for improved toe-in angle during higher-speed maneuvering), as has shock absorber placement (moved forward for better cargo capacity and reduced longitudinal low frequency input). Overall, front and rear suspension friction has been reduced by 40 percent, and its centre of gravity is cut by a substantial 20 mm.

The end result: A Corolla Hatchback that possesses an uncanny blend of balance, composure, and feel that’ll have its driver pining for windy roads – time and time again.

The Heart of Fun-to-Drive

Physically, the engine is smaller and lighter than its 1.8-litre four-cylinder predecessor, which helps to lower Corolla Hatchback’s centre of gravity and benefits its overall balance. The 2.0-litre is also quieter for improved Noise Vibration Harshness (NVH) with additions like a more rigid crank case with integrated stiffener; a lighter resin cylinder head; and a ribbed oil pan.

The M20A-FKS is equipped with Toyota’s latest D-4S fuel-injection that uses high-pressure direct- injection and low-pressure PFI (Port Fuel Injection). The setup adapts its injection method based on driving conditions so that ideal combustion is executed. The engine also features Dual VVT-i (Variable Valve Timing-intelligence), with VVT-iE (Variable Valve Timing-intelligence by Electric motor) on the intake side and VVT-i on the exhaust. VVT-iE uses one electric motor instead of oil pressure to control the variable valve timing. Together, the valve timing systems enhance power output and fuel mileage, and cut harmful emissions.

Other notable improvements to the Dynamic Force engine include:

- Pistons with round top surface and slanted side wall

- Lubrication enhanced with three oil jets dedicated to each cylinder

- Conrod made of high strength steel with optimized shape

Be they a commuter or canyon cruiser, drivers will appreciate Corolla Hatchback’s available transmissions: an all-new Direct Shift-CVT (K120), or a six-speed iMT manual transmission (EG60). The Direct Shift-CVT has simulated 10-speed Sequential Shiftmatic steps, Sport Mode, and available paddle shifters. It features a number of innovative elements, including the world’s first launch gear in a passenger vehicle CVT.

Having a launch gear facilitates improved transmission efficiency in lower gear ratios where belt efficiency is typically poor. The transmission system utilizes gear drive when starting from a full stop, resulting in powerful acceleration, while at the same time, resolving the momentary sluggish feeling that was previously present during accelerator operation. Both smooth and comfortable launch performance are realized. When switching from gear drive to belt drive, the transmission system uses highly responsive gear change control technologies cultivated from automatic transmission technology.

With its launch gear in place, the belt has been tuned for higher gear ratios. This new setup not only improves the efficiency of belt operation, but it also enables the adoption of wider gear ranges, thereby realizing a class-leading gear ratio range of 7.5 for the 2.0-litre class.

Another benefit of the launch gear is a reduced input load. This enables the size of both belt and pulley components to be reduced. Furthermore, the belt angle has been narrowed and pulley diameters reduced, resulting in shifting speeds that are 20 percent faster. Powerful and predictable acceleration is realized, as has an endearing driving experience.

But the more involved driver will be engaged by the all-new six-speed iMT with downshift rev-matching control. Compared to the existing manual transmission, the new gearbox is lighter (by 7 kg; total weight of 40 kg) and shorter (by 24 mm), making it one of the world’s smallest transmissions. Its small size contributes to improved fuel efficiency.

The gearbox also offers world-leading transmission efficiency, while the use of iMT controls, which automatically adjust engine revolutions when changing gears, ensures smooth gear shifting―free of uncomfortable recoils―for the driver.

Toyota continues to lead the pack when it comes to safety, and the all-new Corolla Hatchback provides drivers and passengers with standard safety technologies that take one step closer to achieving the ultimate goal of zero casualties from traffic accidents.

Breakdowns of each technology are as follows: