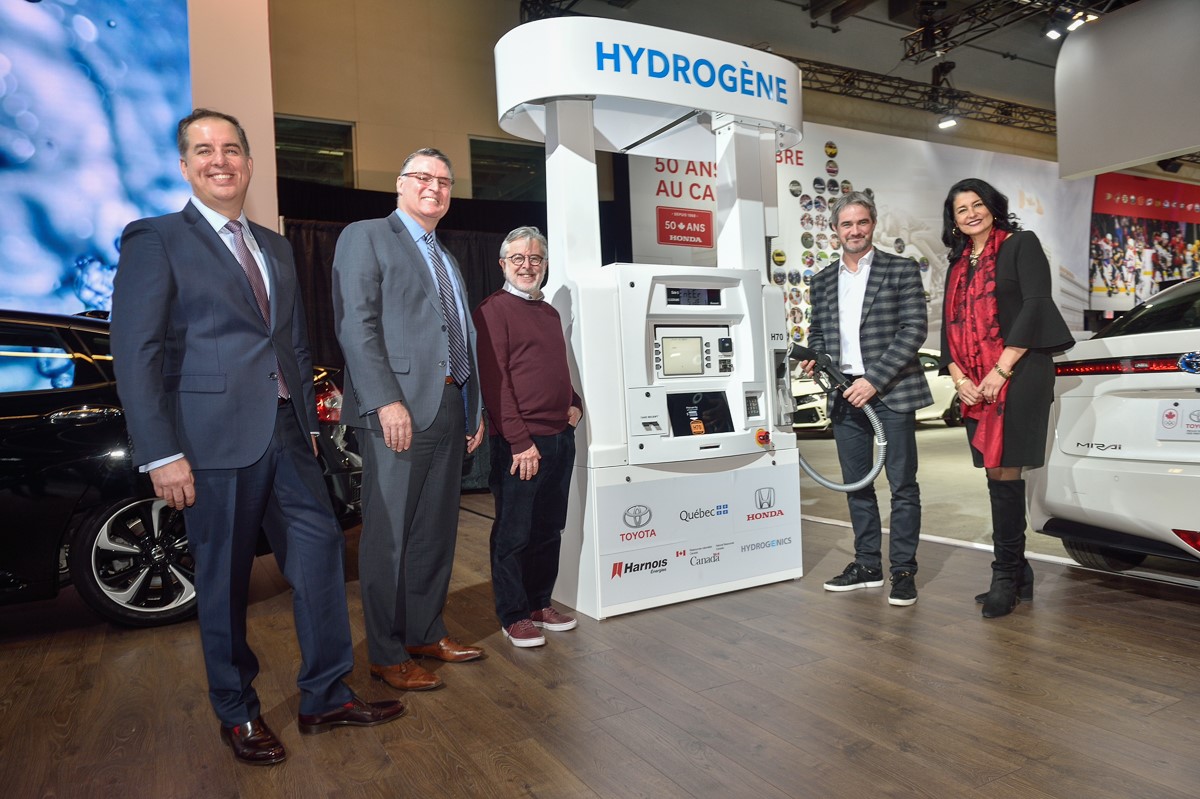 Toyota Canada Inc. (TCI) joined with Honda Canada Inc. and other hydrogen partners at the 2019 Montreal International Auto Show to provide an update on the overall progress of hydrogen fueling infrastructure for fuel cell electric vehicles (“FCEVs”) in Quebec.

The building of Quebec’s first multi-fuel station, located in Quebec City, is well underway.  In partnership with Harnois Energies and Hydrogenics, the station is being built with investment support from the Government of Quebec, through Transition énergétique Québec (TEQ), as well as Natural Resources Canada and Toyota.

Toyota also supplied an additional, stand-alone hydrogen fueler for the station to help ensure uninterrupted service for its customers.

“To us, what’s most exciting is that the station will use an on-site electrolyzer to turn Quebec’s abundant hydroelectricity into clean, sustainable hydrogen for fuel cell electric vehicles,” said Martin Gilbert, Director of Corporate Strategy and Innovation, Toyota Canada Inc.  “As a global leader in the production of hydroelectricity, and with this type of technology in place, Quebec is poised to be a world leader in the production of hydrogen.”

The new station will start fueling vehicles in February and there are already plans to build another station in Montreal.

Honda Canada recently joined the hydrogen movement in Quebec, and will be providing investment support for the Montreal station, bringing this cutting-edge technology closer to more Quebeckers and making FCEV travel between Quebec City and Montreal even more convenient.

“Quebec consumers lead the way when it comes to adopting and embracing innovative clean technologies like hybrid electric and plug-in hybrid electric vehicles,” Gilbert told the auto show audience.  “It’s clear that Quebeckers care about the climate – and that they’re willing to take action to make a difference.  It’s why we believe that, perhaps more than any other market, Quebec is ready to embrace fuel cell electric vehicles.”

Additional Support Put in Place for the Arrival of FCEVs

Toyota Canada has been advocating, investing and building partnerships to prepare the Quebec market for fuel cell electric vehicles.  The company has been working closely with the Government of Quebec and other hydrogen stakeholders to put in place the necessary fueling infrastructure, training and service support for FCEVs.

TCI has invested in training for Quebec first responders to help them understand how fuel cell electric vehicles work and how to safely handle them.  The company has also trained its local Toyota dealership technicians, and is upgrading its Quebec Zone office to enable advanced level support for FCEVs right in Quebec.

To learn more about the recent developments on this subject, please view the video here.

Toyota Canada Inc. (TCI) is the exclusive Canadian distributor of Toyota and Lexus vehicles. Toyota has sold over 5 million vehicles in Canada through a national network of 287 Toyota and Lexus dealerships. Toyota is dedicated to bringing safety, quality, dependability and reliability in the vehicles Canadians drive and the service they receive. TCI’s head office is located in Toronto, with regional offices in Montreal, Vancouver, Calgary, and Halifax, and parts distribution centres in Toronto and Vancouver. Toyota manufactures vehicles at two sites in Canada. Having produced more than seven million vehicles, popular Canadian models built at these facilities include Toyota RAV4, Toyota Corolla, Lexus RX 350 and RX 450h hybrid.