The newly formed JHyM will foster the deployment of hydrogen stations throughout Japan under the guidance of the Japanese Central Government's Ministerial Council on Renewable Energy, Hydrogen and Related Issues ("Basic Hydrogen Strategy" published on December 26, 2017). In alignment with Central Government policies, the 11 founding companies joined forces to create the world's first framework in which not only infrastructure developers and automakers, but also investors are involved in collaboration, based on the common belief in the effectiveness of hydrogen and FCV for mobility and continued sustainable societal development.

To tackle the key issues raised during the beginning stage of FCV promotion, JHyM will ensure that infrastructure developers, automakers, and investors each do their part to support the successful strategic deployment of hydrogen stations in Japan, promoting effective operation, and facilitating a positive cycle of improved convenience for FCV users. The ultimate goal of JHyM is to smoothly increase the number of FCVs on the road in Japan, and thus to sustainably build the hydrogen station business.

JHyM aims to complete its mission within 10 years. It intends to start building 80 stations nationwide by fiscal year 2021 in line with the Japanese Central Government's "Strategic Road Map for Hydrogen and Fuel Cells" (revised March 22, 2016), and to further extend the network afterward. This roadmap released by the Council for a Strategy for Hydrogen and Fuel Cells targets the completion of about 160 hydrogen stations serving around 40,000 FCVs by fiscal year 2020.

JHyM will take on the following specific initiatives:

In order to encourage customers to use hydrogen, JHyM will improve the convenience of stations, coordinating with the Association of Hydrogen Supply and Utilization Technology (HySUT), an industrial association of hydrogen station developers, for example, by extending the number of service days per week to meet increased demand.

JHyM will collaborate with external organizations, such as the Fuel Cell Commercialization Conference of Japan (FCCJ) and HySUT, to reduce cost by addressing issues such as the standardization of equipment and revision of regulations.

The following key roles and responsibilities are undertaken by the founding member companies of JHyM:

JHyM will start operating in April 2018, aiming to attract the wider participation of hydrogen station operators and investors, and to achieve sustainable hydrogen station business and FCV development in Japan. 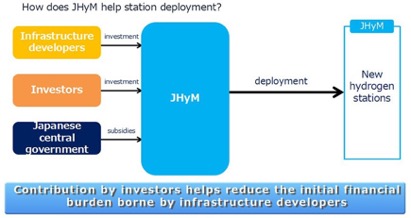 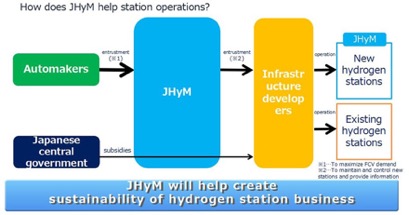