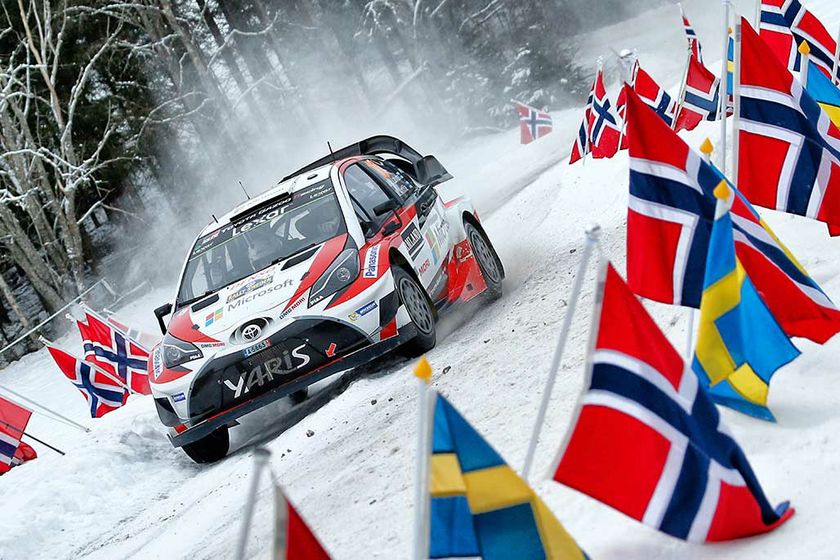 (TORONTO, ON – FEBRUARY 15, 2017) For the first time since Rally China in 1999, Toyota has won a round of the FIA World Rally Championship: on only the second event for the all-new Yaris WRC. Jari-Matti Latvala inherited the lead after Saturday’s super special stage, when the former leader broke his steering. Latvala then won all three stages today to extend his advantage and claim the first rally win for TOYOTA GAZOO Racing World Rally Team. Juho Hänninen had a trouble-free day and scored more manufacturer points, meaning that TOYOTA GAZOO Racing is now second in the manufacturers’ championship, while Latvala heads the drivers’ standings, having sealed his 17th career win, his fourth in Sweden, and his first since Mexico 2016. In total, Jari-Matti won six stages: SS1, SS4, SS13, SS16, SS17 and SS18.

“It’s a great feeling to win a round of the World Rally Championship after a break of 17 years. I have always been looking forward to this moment, but I never imagined that it would come so soon. A special thanks not just to each and every member of the team, but also to all the fans who have been waiting for our return and shared the joy with us. So I’d like to share with everyone a discussion I had with Tommi and Jari-Matti before the start of Rally Sweden about communication with cars. Jari-Matti said he tries to communicate with them with love, and drive them with care. Tommi said he can have a good understanding of how to drive them faster because he loves cars. Their words, full of love for cars, touched me because I feel the same. So my wish is for us all to keep on enjoying this feeling and facing the challenges together to make the Yaris an ever-better car.”

“It’s very hard to find the words to describe what I am feeling right now: what we are all feeling. Monte-Carlo was an unexpected result, but this is beyond unexpected. Of course we were lucky to have this win, but it’s also a huge tribute to the talent of Jari-Matti and the united team work that has taken place in Finland, Germany and Japan. It's an incredible feeling and I just want to thank everybody who has made it possible: especially our chairman Mr Toyoda for his faith in us, Jari-Matti, Miika, Juho, and Kaj. This is a special day that we are all going to remember for a very long time, but at the same time we will keep our feet on the ground now and continue to work as hard as always.”

“I am so, so happy. For a new team and new car to win its second rally: I really have no words. I think I drove my best power stage ever today. Huge thanks to all the team. Now we are super-motivated to continue like this: I just can’t wait to get to Mexico. It’s fantastic to win but I also feel very sorry for Thierry Neuville, who lost the lead yesterday at the super special stage. I have been in a similar situation myself in the past, so I completely understand how he must be feeling now. We know we were lucky, so we need to carry on improving and working for our goal.”

“I am so proud to be part of this team of dedicated and hard-working people and so happy. This is an amazing result for all of us. From our point of view we spent the rally recovering from our mistake on Friday, but we completed plenty of useful testing and I increased my time and confidence in the car.”

2017 FIA World Rally Championship for drivers after round two:

2017 FIA World Rally Championship for manufacturers after round two:

See you in Mexico on March 9th!

The next stop on the World Rally Championship, round three, is Rally Mexico from March 9-12. This will be the first gravel round of the year and the first run in high temperatures, with the stages at high altitude as well, which deprives the engine of oxygen. As a result it represents another brand new challenge for TOYOTA GAZOO Racing.