Larry Hutchinson: “The pod people are forgetting that driving is fun” 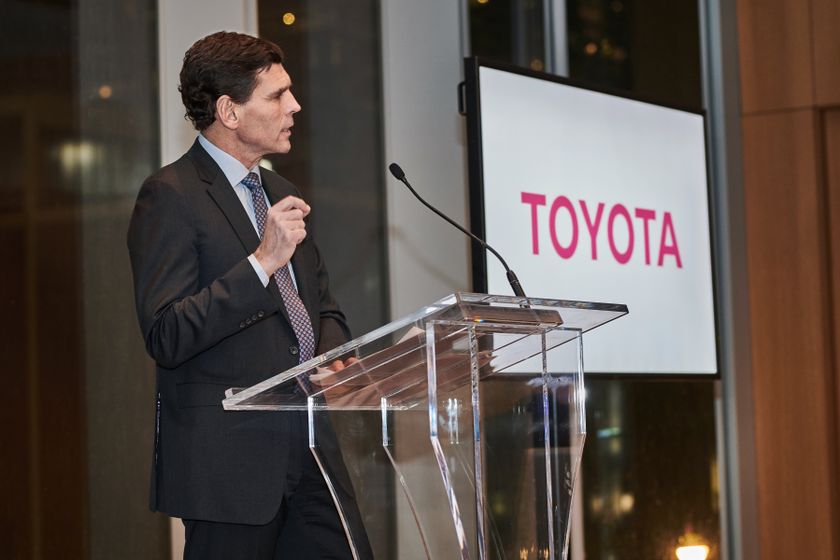 TORONTO, Ontario, February 13, 2019 – Speaking to a room full of key Canadian automotive industry influencers, Larry Hutchinson, President & CEO at Toyota Canada Inc., claimed that, in its race toward fully autonomous vehicles, the industry may have forgotten one very important truth: People still like to drive.

“I believe our industry is at a crucial fork in the road,” Hutchinson said.  “We’re on the cusp of an important evolution in transportation.”

Even as vehicles are becoming increasingly electrified and automated, most consumers still enjoy driving.  To Toyota, the two are not mutually exclusive.  The company believes drivers want to be engaged - and that they want a vehicle that reflects their lifestyle and personality.  If the auto industry ignores this, Hutchinson warns, they do so at their peril.

“Why have so many automakers lost their passion for driving,” he asked.  “They seem to be so focused on the ‘next big thing’ - on the self-driving electric pod – they’re forgetting that driving is fun.”

He noted that, when you look at the concept vehicles of the future, you’ll often see a bland, autonomous pod that replaces the steering wheel with a computer screen and a pillow.

“It’s very easy to get caught up in a vision of a radically different model of mobility,” Hutchinson said. “A future where personal use vehicles give way to shared transportation devices that will autonomously ferry people and goods from place to place.”

In this vision, Hutchinson lamented, people are lifelessly staring at screens while their mode of transportation takes them where they want to go.

“The proposition that, given a choice, people would prefer to be idle occupants of a pod… that’s not Toyota’s vision… not even close,” he said.  “As other automakers are working on vehicles that drive themselves - turning us into passive passengers - we’re incorporating advanced automated safety technologies in ways that enhance, rather than deaden, the driving experience.”

Instead of replacing the driver behind the wheel, Toyota’s Guardian approach is a teamwork concept that sees advanced automated safety technologies act as their personal co-pilot, enhancing their awareness and control of the vehicle, and helping them be a better driver.

Hutchinson believes that, in the future, cars will be more fun to drive, not less so, and emphasized that Toyota’s recent approach has been to build better, more exciting vehicles for people who love to drive.

“Lots of people will tell you the future of mobility is one of robotic, shared use vehicles… of autonomous pods and anonymous pod people,” he stated.  “I don’t believe in pods.”

English, Corporate
‹ back
Every effort has been made to ensure the product specifications, equipment, and content on this site are accurate based on information available at time of publishing. In some cases, certain changes in standard equipment or options may occur, which may not be reflected online. Toyota Canada reserves the rights to make these changes without notice or obligation.