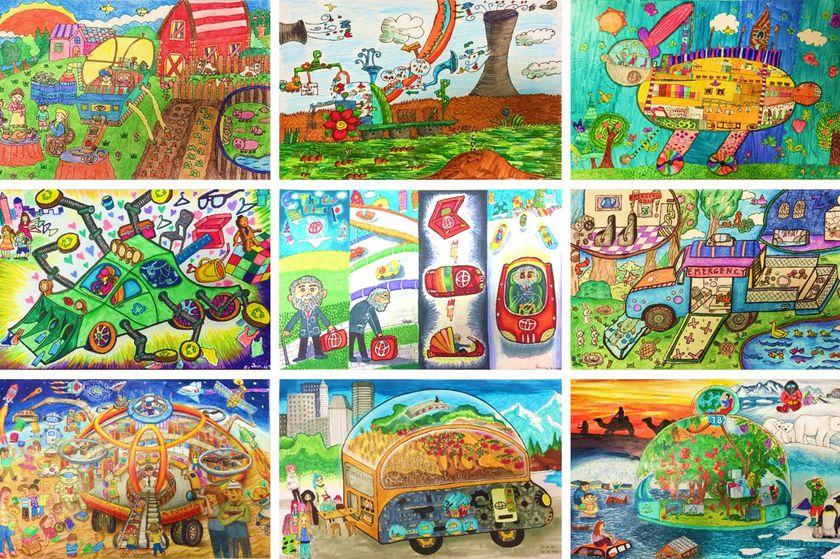 TORONTO, ON., March 23, 2017 – Invite children to think about what “dream cars” should be, let them unleash their imaginations with colourful drawings, and get ready to be inspired. That’s the essence of the Toyota Dream Car Art Contest.

This year’s collection of amazing artwork has once again, demonstrated how Canada’s young people have visions of a future with mobility as a catalyst to improve the lives of individuals and society in environmental, educational or humanitarian terms.

“I am inspired by our children’s creativity, artistic talent, and remarkable ability to envision such exciting, innovative and profound ideas for the future of our industry,” said Larry Hutchinson, President and CEO of Toyota Canada Inc.

The challenge of narrowing down all the entries to just nine winners was assigned to Hutchinson and his fellow judges, including:

“This is my second year judging and once again, I’m blown away by each of the entries,” said Damak. “So much talent, so many ideas to make this world a better place. Congratulations to everyone who participated. Excited to see what the future holds!”

Added Amery: “The ingenuity and creativity of the kids submitting ideas was mind-boggling! Seeing ideas of social responsibility and respect for the planet come to life through innovations applied by these kids to their dream vehicles was truly inspiring.”

Those sentiments were also echoed by the Durrells.

“We were so honoured to be part of this inspiring contest,” they said. “The thought and talent that went into each entry was impressive, and it was a tough job to rate the submissions. Toyota’s contest truly brings out the best in youth, encouraging them to find inspiration in the future and embrace their imaginations. What a fun experience!”

With all the artwork judged on originality, creativity and relevance to the “dream car” theme, this year’s Canadian nine winners (three children for each of three age categories) include:

All nine winners will receive a 3D printing pen. And each will represent Canada in Toyota’s global competition, where the top 30 entries from around the world will be invited to participate in an awards ceremony to be held in Japan in August.

Over the past four years, five Canadian entries have been chosen as global finalists, including two who won bronze medals last year. To put that achievement in context, more than 855,000 entries from over 80 countries and regions around the world were received in 2016.

Local ceremonies have been arranged to recognize each of the nine winners and to present them with their prizes. Details are as follows: