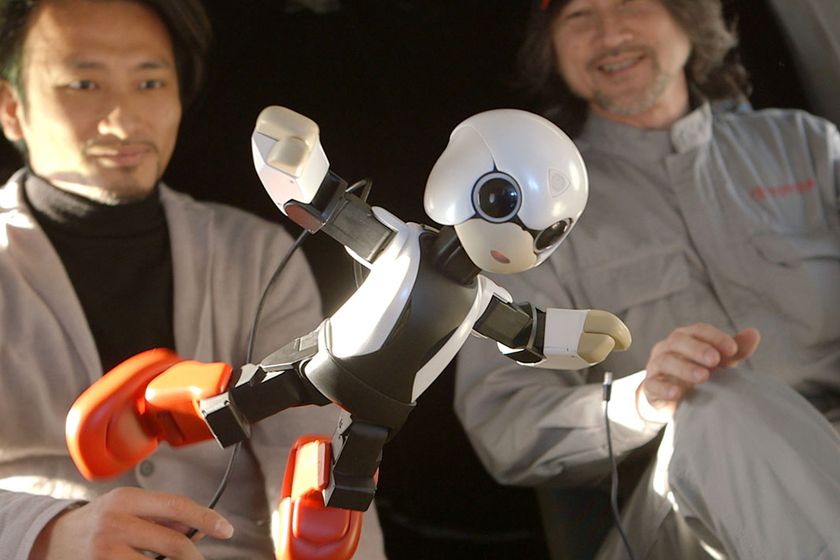 Kirobo arrived at the International Space Station (ISS) on August 10, 2013 and spent a total of eighteen months there, holding the world’s first conversation experiment in outer space between a robot and a human (JAXA astronaut Koichi Wakata) and conducting research for a future in which humans and robots coexist.

On February 10, Kirobo came safely back to Earth aboard SpaceX’s CRS-5 Dragon cargo supply spacecraft which splashed down in the Pacific Ocean off California, and then arrived back in Japan on March 12. Kirobo’s first words after returning home were: “From up above, the Earth glowed like a blue LED.”

At the debriefing session held today at the National Museum of Emerging Science and Innovation in Tokyo, the project members gave a summary report and showed a video of the highlights of Kirobo’s activities aboard the ISS. The session was chaired by Fuminori Kataoka, project general manager in the Product Planning Group of Toyota Motor Corporation, and the two speakers were Tomotaka Takahashi, the president of ROBO GARAGE Co., Ltd. who is also a visiting research fellow at the University of Tokyo’s Research Center for Advanced Science and Technology, and Yorichika Nishijima, a copywriter in Dentsu Inc.’s Business Creation Center as well as head of the Dentsu Robot Center. Kirobo also appeared on stage to chat with the project team members.

List Of Websites Relating To Kirobo, Mirata And The Kibo Robot Project Members