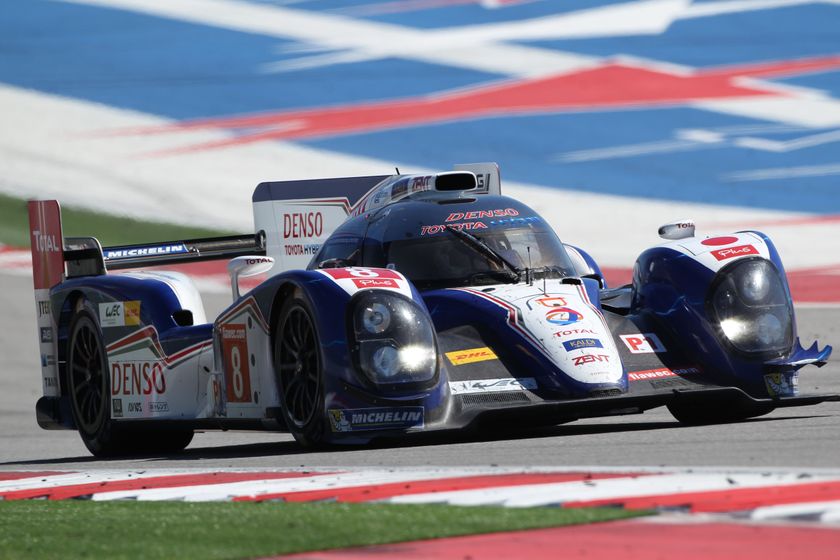 Austin, Texas – September 23, 2013 – TOYOTA Racing fought a race-long battle for victory in the Six Hours of the Circuit of the Americas before taking second place in the fifth round of the FIA World Endurance Championship.
The #8 TS030 HYBRID took its third podium of the season after a close, entertaining contest at the front for Anthony Davidson, Sébastien Buemi and Stéphane Sarrazin.
After six hours of intense racing in hot temperatures, the #8 crossed the finish line just 23.617 seconds behind the race winner.
Sébastien started the race from third and, after an immediate 15-minute safety car period, took second on the restart. That started a close battle with the #1 Audi as the pair fought wheel to wheel prior to the first pit stops.
Damage to the #1 left Sébastien free to focus on the lead and he began a lengthy scrap with the #2 Audi as the contenders chose different strategies.
The TS030 HYBRID was able to get strong performance from the same set of tires over two stints. This, combined with quick pit stops, reduced the amount of time the #8 needed to spend in the pits.
That helped Stéphane to rejoin in the lead when he took over from Sébastien close to one-third distance, with the see-saw battle for victory continuing beyond the halfway point.
Anthony, on the day he became a father for a second time following the birth of his daughter that morning, took the wheel for a single stint before handing the #8 back to Sébastien.
As the various strategies emerged, the #8 needed to push hard and Sébastien clocked a series of fast laps despite extremely demanding conditions.
After an epic effort, Sébastien swapped with Stéphane for a final short stint and he took the checkered flag in second.
The next round is TOYOTA Racing’s home race, the Six Hours of Fuji on October 20th where the team will have two cars competing as the #7 of Alex Wurz, Nicolas Lapierre and Kazuki Nakajima returns to action.
TS030 HYBRID #8 (Anthony Davidson, Sébastien Buemi, Stéphane Sarrazin)
Race: 2nd, 187 laps (+23.617secs), 7 pit stops. Fastest lap: 1min 48.745secs
-
Anthony Davidson: “It was a good race for us. We didn’t expect to be as close to the Audis as we were so we can be proud of how we performed. We were quite brave with our strategy by double-stinting the tires from the beginning and this paid off. I just did one stint as I have not had a lot of track time this weekend on a new track for me. It was quite tough at the beginning but that was to be expected considering I didn’t do qualifying and we didn’t get any dry running on Friday. It was nice to be in a fight for victory, even if we didn’t quite get the result we ultimately wanted.”
-
Sébastien Buemi: “We fought as hard as possible right to the end; it was a really tough fight. We lacked a bit of pace over one lap but our strategy was good and this gave us a chance to fight for the win. I was able to get into second place at the beginning of the race thanks to the hybrid boost on acceleration and that put us in the game. I enjoyed the battle with Audi and we had some quite exciting moments. We gave everything and even though it’s really good to be back on the podium I’m a bit disappointed to miss out on victory as we were close. Now we will try to get more performance for the next race.”
-
Stéphane Sarrazin: “I’m really pleased to return to the podium. After the first stint, when we didn’t need to change tires but Audi did, we knew there was a chance to win the race. Our car was really good on the tires and we could push until the last lap of the second stint, which was great. We didn’t quite have the pace but our strategy was the right one. Everyone did a good job, particularly Sébastien who had a long time in the car in very hot conditions. It was not easy out there but he kept the pressure on. I’m looking forward to Fuji where we want to finish one place higher.”
-
Yoshiaki Kinoshita, Team President: “That was a really exciting race; nobody knew which car would win until the last pit stop. Our car performed well, especially during the first three hours when the balance was perfect. One down side is that there are only four hybrid recovery zones at this track, compared to five in Brazil. That limited us a bit because hybrid boost is one of our strengths. Today was the first time we could really see the performance of our high-downforce specification in a race and I’m happy to have closed the gap. Particularly today I want to thank our drivers because the double stints were tough for them, especially Sébastien who did two of them.”
-
About TOYOTA Racing in the FIA World Endurance Championship:
TOYOTA first competed in the FIA World Endurance Championship (WEC) in 1983, marking the start of a long period of participation in endurance racing which included several editions of the Le Mans 24 Hours. TOYOTA cars have raced in 15 Le Mans 24 Hours races, achieving a best result of second place on four occasions (1992, 1994, 1999 & 2013). TOYOTA entered the revived WEC in 2012, as TOYOTA Racing, with its first hybrid LMP1 car, the TS030 HYBRID. After making its debut at Le Mans, the car went on to win three races from pole position in its first season. The TS030 HYBRID chassis, modified for 2013, has been designed and built by TOYOTA Motorsport GmbH (TMG), where the race team is based. TMG is the former home of TOYOTA's World Rally and Formula 1 works teams, and was responsible for design and operation of TOYOTA's TS020 Le Mans car in 1998-99. TMG now combines works motorsport participation with a new direction as a high-performance engineering services provider to third party companies, as well as the TOYOTA family.
-30-