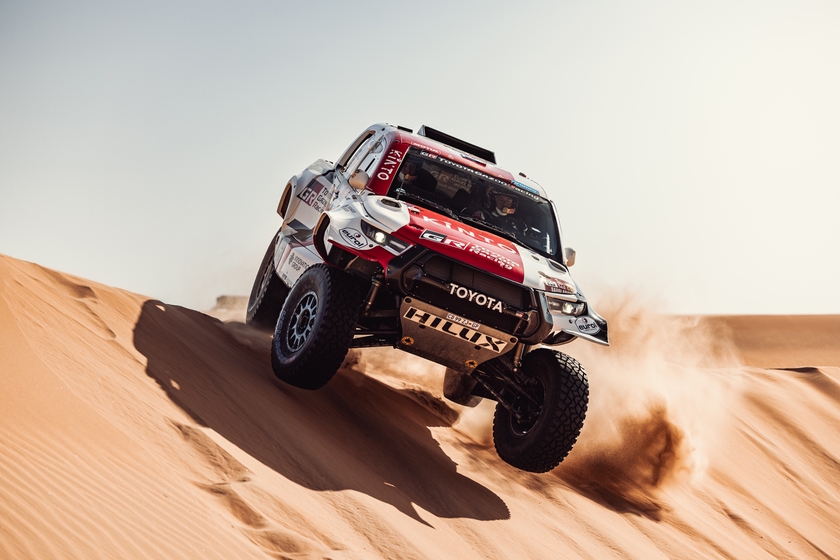 TORONTO, Ontario – January 16th, 2023 – Qatar’s Nasser Al-Attiyah and his French co-driver, Mathieu Baumel, successfully defended the Dakar title they won for TOYOTA GAZOO Racing (TGR) in 2022, when they brought their GR DKR Hilux T1+ over the finish line of the final stage of Dakar 2023 on 15 January. The pair lost 5min 41sec to the stage winners, but that hardly mattered, as they sealed the overall victory with a winning margin of 1hr 20min 49sec.

The final stage of Dakar 2023 was a 136km-long test that started from the bivouac at Al-Hofuf. Competitors had to complete a short liaison of 167km before taking on Stage 14, which was then followed by a final liaison of 100km to the finish podium in the coastal city of Dammam.

For Nasser, this was his fifth win in the Dakar Rally, while Mathieu’s tally is now four victories. The pair have won three times for Toyota, with the latest victories coming in a back-to-back display of quality, durability and reliability for the Japanese manufacturer. The pair took over the lead of the event on Stage 3, and never relinquished that position.

Giniel de Villiers, who completed his twentieth consecutive Dakar Rally when he crossed the finish line near Dammam, ended the rally in 4th place in the overall standings. This result brings his total number of Top 5 finishes to 15, including one victory in 2009. The South African has only finished outside the Top 10 on one occasion, and his performance in the 2023 Dakar Rally underscores the toughness and tenacity of one of the Dakar Rally’s true veteran racers. Together with co-driver Dennis Murphy, Giniel finished this year’s 45th edition of the rally 2hr 31min 12sec in arrears.

Dakar 2023 will long be remembered by Henk Lategan and co-driver Brett Cummings as a race that could have turned out very differently for them. They moved as high as 2nd place in the overall standings, before two setbacks pushed them down the order. The pair showed great pace throughout the rally, and will be hoping for a truer reflection of their speed in future editions. Even so, they finished in 5th place overall, less than 5min behind their teammates in fourth.

Toyota dominated the Dakar 2023 results, with the works TGR crews finishing 1st, 4th and 5th. A privately entered Toyota Hilux T1+ in the hands of the young Brazilian, Lucas Moraes, added to the Japanese manufacturer’s tally, by finishing in third place overall. This was Lucas’ first attempt at the Dakar Rally, though he had an experienced co-driver in the form of Timo Gottschalk beside him in the car.

In terms of the 2023 World Rally-Raid Championship, of which the Dakar Rally was the opening round, Nasser and Mathieu amassed a total of 85 points. This means they trail the log leaders by just two points after Round 1 of the five-round championship. Toyota is in 2nd place in the Manufacturers’ championship, just a single point behind the leaders. The next race is the Abu Dhabi Desert Challenge, which takes place during the last week of February.

Congratulations to the all 6 teams on the tough 8500km road! Thank you to all the fans for your support! Congratulations to Nasser Al-Attiyah and Mathieu Baumel on winning the overall title for the second year in a row! This following their victory in the first ever World Rally-Raid Championship late in 2022, which was itself an amazing achievement.

On the long, tough roads of Dakar, it is very hard to win if you don't have a car that's not only easy to drive, but also reliable and durable.

By continuing to challenge the Dakar, the GR Dakar Hilux T1+ will be refined into an ever-better car. Thank you for training Hilux!

Mr. Akira Miura and Mr. Laurent Lichtleuchter could not three-peat this time because they had a rollover during the rally and lost significant time. It was a little sad, but thank you for completing the first Dakar in Land Cruiser 300 GR Sport!

Please allow me to share the message that Mr. Akira Miura sent us after the rollover:

"Land cruiser is a car that can go anywhere and come back. This year’s Dakar is really tough and not everything is going smoothly, but it's precisely because it's such a tough rally that I want to train our Land Cruiser 300. I think it's a fitting stage.

There are still difficult stages in the second half of the rally, and since we’ve come this far, we are thinking that we are pretty much ready to face much more hard and difficult stages!

Such a stage is a chance to demonstrate the potential of Land Cruiser 300, in which we believe and trust. In the second half of the race, I would like to concentrate once again on completing the Dakar Rally."

Mr. Akira Miura, who also serves as the development driver for Land cruiser 300 (mass-produced vehicle), challenged Dakar with this feeling... I sincerely thought that Land cruiser can become an even better car as a result of their dedication.

Let's do our best "together" for an 11th and 12th consecutive victory!”

“What a day for our entire team! Winning Dakar is something memorable, but winning the world’s toughest race twice in a row is simply extraordinary. My sincere thanks to every member of our team, every one of our sponsors and, of course, our drivers and co-drivers, who delivered a stunning result. I’m really proud of our GR DKR Hilux T1+, which has proven yet again that it is reliable and durable enough to not only complete the world’s roughest automotive race, but to do so two years in a row.”

“I would like to start by thanking all three our race crews wholeheartedly. To Nasser and Mathieu; Giniel and Dennis; and Henk and Brett, my sincere thanks for your relentless efforts from the opening stage. Your dedication to defending our title ensured that the Dakar trophy has come to TOYOTA GAZOO Racing once again. Today’s Dakar Rally victory was a massive step in our W2RC journey. The points for overall victory cannot be underestimated, especially given the fierceness of this championship. As with the Dakar itself, we’re looking to defend our title in the W2RC, and while we leave from Saudi Arabia trailing our nearest competitors by a small margin, we are confident that we will be able to put up a good fight during the remainder of the year.”

“This in amazing feeling! I have to thank so many people, starting with every member of our team. It was a tough two weeks, but to be able to come back and defend our title is fantastic! I’m really proud of our GR DKR Hilux T1+, and to win the race three times with TOYOTA GAZOO Racing is truly something special.”

“The Dakar is always full of challenges, and we certainly had our share of challenges this year. Of course, it could’ve been better for us, but then many competitors can probably say the same. It would have been nice to be on the podium, but overall, as a manufacturer, Toyota has every reason to be proud. I think this result has just proven the reliability of the Hilux once again, and we again managed to showcase this amazing car in Saudi Arabia this year.”

“Dakar 2023 has been a rollercoaster for us. It has been a tough two weeks for us, with some extremely good days; but also some disappointing ones. It does feel good to be in the Top 5 after such a tough Dakar, and I think they’ve thrown everything at us this year. With that in mind, it feels fantastic to be at the end of the race, and while we’ll always wonder what might have been, we are very happy to bring the car home in a good position.”