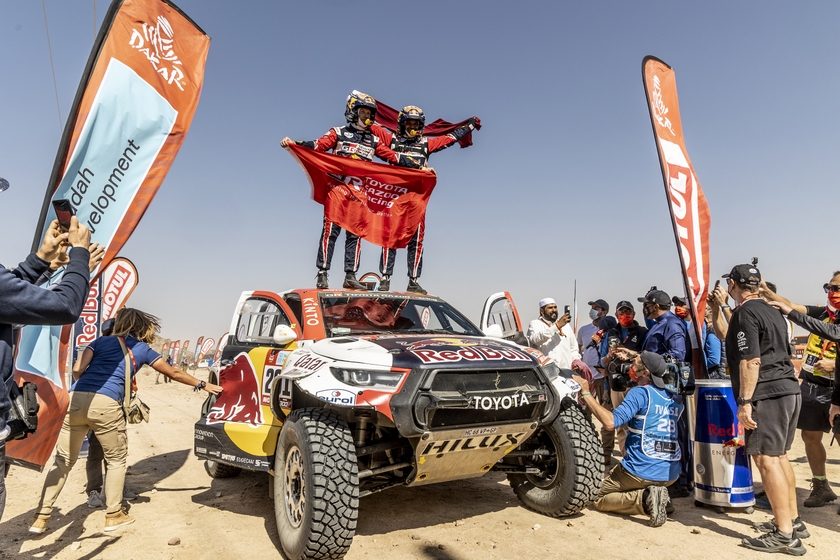 TORONTO, Ontario (January 17, 2022) – TOYOTA GAZOO Racing’s Nasser Al-Attiyah and co-driver Mathieu Baumel brought their GR DKR Hilux T1+ home safely on the final stage of the 2022 Dakar Rally to win the event overall by 27min 46sec. This is the Qatari driver’s second victory for the team, having previously won the event in 2019.

Nasser and Mathieu had taken the lead in the rally during the opening stage of the event and were never in danger of relinquishing that position.

This victory is significant for Nasser, as he has expressed the hope to win in the Arab world since the Dakar first moved to Saudi Arabia in 2020. He came agonizingly close in both 2020 and 2021, before securing his first win in Saudi Arabia in 2022. At the same time, the victory means a lot to the team who developed the new GR DKR Hilux T1+, which features larger wheels and tires, more wheel travel, and the 3.5 litre twin-turbo V6 engine that also powers the new Toyota Land Cruiser GR Sport. Winning the race with a new car is testament of the team’s ability to continuously push the limits of engineering and build ever-better cars.

The final stage was also a redemption for Henk Lategan and Brett Cummings, who sacrificed their own chances of a stage win when they selflessly waited for their leading teammates to pass them in Stage 11, in order to lend support if needed. Henk and Brett finished at the 31st place overall.

For Giniel de Villiers and co-driver Dennis Murphy, the 2022 edition of the world’s toughest cross-country race brought many highs and lows. However, it was a broken oil pipe that put paid to their podium aspirations mid-race. Despite this, the South Africans soldiered on, winning one stage outright, and deservedly attaining a place in the Top 5. Their time in the closing stage was 5min 30sec behind that posted by Henk and Brett, but it was enough to secure 5th place in the overall standings.

Dakar 2022 saw Shameer Variawa and co-driver Danie Stassen cement their in-car relationship, as they powered through some early-race jitters and bad luck, to record multiple solid stage results. By the time they completed the final stage, mid-way between the cities of Bisha and Jeddah, the pair had moved into 15th place overall. This was Shameer’s second Dakar finish, and a maiden finish for his co-driver.

Dakar 2022 was the 44th edition of the iconic event, which first took place in January 1978. The event took place in northern Africa until 2007, with the 2008 event cancelled due to a terrorist threat. The rally moved to South America in 2009, where it enjoyed a decade of spectacular scenery and tough terrain. In 2020, the first Saudi Arabian edition of the event took place, with the 2022 edition covering 4,261km of competitive stages.

Glyn Hall, Team Principal: “What an epic victory for Nasser and Mathieu, and the entire team. To come to Dakar and win with our new GR DKR Hilux T1+ first time out is amazing. I’d like to dedicate this win to the memory of Dr. Johan van Zyl, who was a visionary leader and consistent supporter of the TOYOTA GAZOO Racing Dakar project over many years. We are extremely proud of what we achieved here this year, and I know the Doc would have been too.”

Nasser Al-Attiyah: “Such an amazing feeling to win Dakar! We lead right from the beginning, and managed to control the pace throughout the race, making it an amazing win. I’d like to thank TOYOTA GAZOO Racing and all our sponsors for the support. I’d also like to thank our Team Principal and Technical Manager, Glyn Hall, for building this fantastic new Hilux T1+. It was an amazing Dakar, and I am extremely happy.”

Giniel de Villiers: “Yes, the last stage was actually very stressful, with many difficult navigation spots. Stephane (Peterhansel) caught up with us at one point, just as we found the way. Lucky for him, but we had to turn around a few times to find the route. So, complicated navigation even on the last stage. In the end, we finished in 5th overall, and while I’m a little disappointed not to be on the podium, I am really glad for Nasser and Mathieu. The car was really good, and the team did a great job preparing the car, and I’m really happy to be here at the end.”

Henk Lategan: “We’ve really had the full Dakar experience. The highest highs, winning a stage early on, to the lowest of lows, sitting until after dark in the desert. We were a little down last night, after the troubles we had in Stage 11, but this morning we woke up and just decided to give it a go in the last stage. We had to overtake quite a lot of cars, and unfortunately, we got a puncture at one point. We thought that was the end of our chances for a second stage win, but we carried on pushing really hard to the end, and we pulled off one last stage win.”

Shameer Variawa: “It’s great to be here, as we had a bit of nerves at the start of the stage. But we made it to the end, and I’m happy to complete my second Dakar; Danie’s first. I’m totally ecstatic, and we’ll be back next year.”