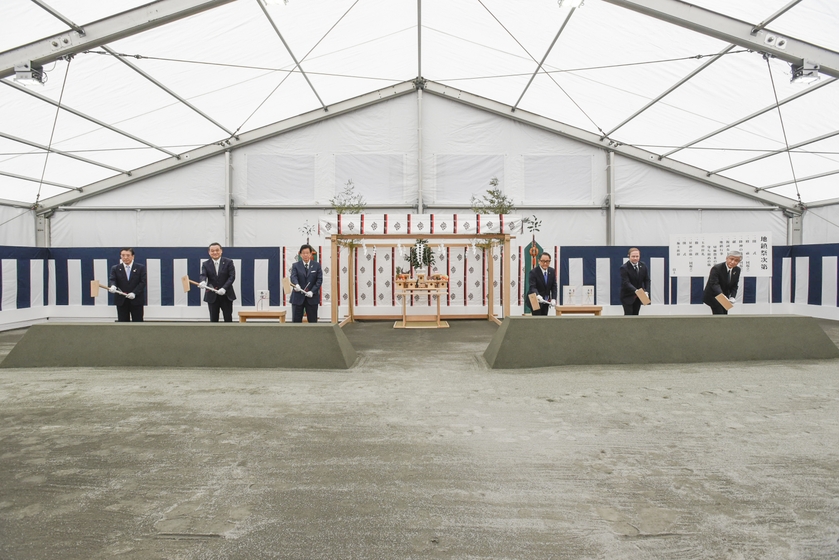 Along with Governor Heita Kawakatsu of Shizuoka Prefecture, Mayor Kenji Takamura of Susono City, and other guests representing the local community, the ceremony was attended by Toyota President Akio Toyoda, Woven Planet CEO James Kuffner, TMEJ President Kazuhiro Miyauchi, as well as others involved in the project. Together, the leaders expressed their hopes for the safe start to construction.

“The Woven City project officially starts today,” said President Toyoda. “Taking action as one has decided is never an easy task. I must express my deepest gratitude to all who have provided their whole-hearted support and cooperation to the project through today. The unwavering themes of the Woven City are ‘human-centered,’ ‘a living laboratory’ and ‘ever-evolving.’ Together with the support of our project partners, we will take on the challenge of creating a future where people of diverse backgrounds are able to live happily.”

TMEJ President Miyauchi added, “I am deeply grateful for having had our Higashi-Fuji Plant operate here for 53 years with the support of the local community. The knowledge and expertise we acquired from all of the people who worked at the plant must be carried on into the next chapter. With the conviction that Woven City will stand not on mere empty land but where the history of the Higashi-Fuji Plant lies, I will offer the greatest possible collaboration in the future.”

To prepare for an era in which all ecosystems that support everyday life are connected with data, Toyota announced the construction of the Woven City at CES 2020 in Las Vegas, United States in January. Woven City aims to continuously create advancements that will help better society by accelerating the cycle of technology and development of services.

Woven City is a project that will demonstrate a human-centered approach to community development. In Toyota’s shift from an automobile manufacturer to a mobility company, the project will bring new technology to life in a real-world environment across a wide range of areas, such as automated driving, personal mobility, robotics, and artificial intelligence (AI). It is expected to provide a number of opportunities for businesses and researchers around the world.

Woven City will have three types of streets interwoven with each other on the ground level, one dedicated to automated driving, one to pedestrians, and one to pedestrians with personal mobility vehicles. There will also be one underground road used to transport goods. The community will start with roughly 360 residents, mainly senior citizens, families with young children, and inventors and will eventually have a population of more than 2,000 individuals including Toyota employees. The infrastructure of Woven City aims to create an environment where inventions with the potential to solve social issues are created on a timely basis.

Toyota Canada Inc. (TCI) is the exclusive Canadian distributor of Toyota and Lexus vehicles. Toyota has sold over six million vehicles in Canada through a national network of 286 Toyota and Lexus dealerships. Toyota is dedicated to bringing safety, quality, dependability and reliability to the vehicles Canadians drive and the service they receive. TCI’s head office is inToronto, with regional offices in Vancouver, Calgary, Montreal and Halifax, and parts distribution centres in Clarington and Vancouver. Toyota also operates two manufacturing facilities in Canada. Having produced more than nine million vehicles, popular Canadian models built at these facilities include Toyota RAV4, Toyota RAV4 Hybrid, Lexus RX 350 and RX 450h hybrid. Recent investments at its facilities in Ontario will allow for increased production of the top-selling Toyota RAV4 and RAV4 Hybrid models for the North American market.