The 2014 Toyota Tundra full-size pickup is set to tackle one of the most challenging highways in the world: The Trans-Labrador Highway 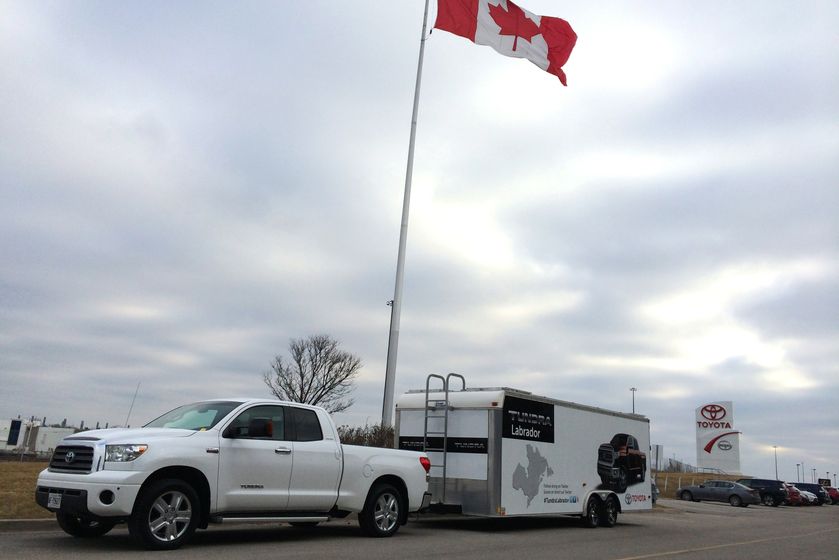 (Toronto, ON - April 2, 2014) Toyota’s truck history is more than 80 years rich, and Toyota trucks have endured the most challenging terrain and weather conditions around the world for just as long.  The Toyota Tundra is  the latest example of this kind of endurance: built, designed and engineered in North America, it has even towed the 300,000 lb space shuttle Endeavour.  And starting today, the redesigned 2014 Tundra along with a 2007 Tundra will take on one of the most challenging journeys yet: the Trans-Labrador Highway.
Two Canadian automotive journalists were challenged to drive one of the most extreme roads to put the Tundra to the test, so they decided that one of the best examples of that is the Trans-Labrador Highway.
Running from the Québec-Labrador boundary through to Goose Bay, NF, the last section of the Trans-Labrador Highway was only completed in 2010.  With mile after mile of dense wilderness, few road services and communities, the 549 km stretch of highway is truly isolated.  And this time of year road travelers are warned of extreme road weather conditions.
So is the Tundra up to this challenging epic journey? With a stunning, bold and chiselled new design inside and out, a proven 5.7-litre DOHC i-Force V8 that generates 381 horsepower at 5,600 rpm and 401 ft-lbs of torque at 3,600 rpm, the 2014 Toyota Tundra full size pickup is ready to take on the Trans-Labrador Highway.  And as if that wasn’t enough, Elmer and Descarries, plus their 2 crew will also travel with a 2007 Toyota Tundra Double Cab 5.7L with over 100,000 km ready to test the long term quality, durability and reliability of the Toyota Tundra.  From towing, to payloading over treacherous icy roads, the trucks and crew have 9 days to travel from Toronto to Corner Brook, Newfoundland.
"As creator of the Canadian Truck King Challenge I always test trucks in the places and on the same roads that everyday Canadians drive," said Howard Elmer, veteran truck journalist. "That's what I told Toyota when they asked where a good place to try out the newest Tundra would be. They said, ’well what's a tough test?'  I said 'let's do the Trans-Labrador highway - in late winter - dragging a trailer!'  They said: 'Let's do it!'  But, then I figured I'd push them even further. I challenged them to get me a used 2007 Tundra to run the same route as the new truck.  They stepped up.  Now let's see what happens!'’
"Here is a unique opportunity to go through an extreme adventure on wheels in one of the world's lesser-known wild frontiers,” said Éric Descarries, Québec-based truck writer and NASCAR expert.
“The Trans-Labrador Highway is one of the toughest roads in the world, and a challenging task for any vehicle and driver,” said Larry Hutchinson, Vice President, Toyota Canada Inc. “We are excited that Howard Elmer and Éric Descarries are giving the redesigned North American designed, built and engineered 2014 Toyota Tundra (along with a 2007 Tundra) the opportunity to take on this challenge.”
The journey begins today, April 2, 2014:
Day one: START  Toronto to Montreal =  544 km
Day two: Montreal to Baie Comeau = 667 km
Day three: Baie Comeau to Labrador City = 570 km
Day four: Labrador City to Churchill Falls = 246 km
Day five: Churchill Falls to Cartwright = 694 km
Day six: Cartwright to Port Hope Simpson = 200 km
Day seven: Port Hope Simpson to Blanc Sablon =217 km
Day eight:  Ferry voyage to Corner Brook = 12 hours
Day nine: FINISH
Total - 3138 km (75kmh) = 42 hr driving time
To follow this epic journey, follow along on Twitter at #TundraLabrador
For more information about the 2014 Toyota Tundra, visit Toyota.ca/tundra.