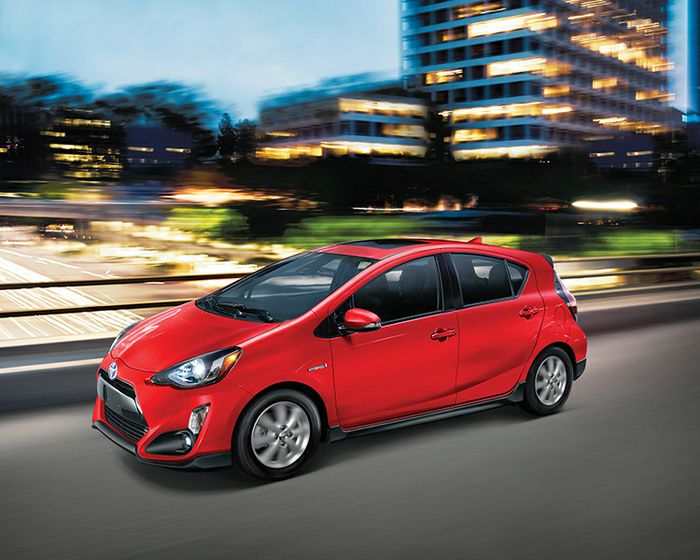 (TORONTO, ON – MARCH 15, 2017) It’s designed for modern life, and thrives in the city. It’s the Toyota Prius c – the most efficient member of the Prius family. For 2017, Toyota has enhanced every Prius c with a snazzy matte black body kit to give the future-forward design an urban edginess, and introduced new safety features across the Prius c model line.

The 2017 Prius c is offered in two models: Prius c (with an available Upgrade Package) and Prius c Technology.

Prius c serves up big helpings of versatility, with its hatchback design and fold-down seatback, there’s up to 484L of cargo space available – enough to stow four golf bags or a stack of snowboards. The body’s sleek, triangular profile is not only futuristic, it’s also super efficient – slicing through the air to minimize resistance – and is available in an expressive palate of vibrant colours.

Every model is impressively equipped with comfort, convenience and technology features.

This model may be enhanced with an available Upgrade Package (Starting MSRP: $23,470), which adds two additional speakers to the audio system, plus additional adjustments on the driver’s seat, a 60/40 split for the fold-down rear seat for added flexibility, premium cloth seat coverings, cruise control, variable intermittent wipers, an instrument panel clad in synthetic leather, a tonneau cover, additional in-cabin storage, 15” alloy wheels, and a back-up camera.

The 2017 Toyota Prius c is on sale at Toyota Dealers across Canada. For complete and up-to-date details and specifications, visit www.toyota.ca/priusc