Tokyo, Japan, June 6, 2019―Toyota Motor Corporation (Toyota) and Subaru Corporation (Subaru) disclosed today that they have agreed to jointly develop a platform dedicated to battery electric vehicles (BEVs) for midsize and large passenger vehicles, and to jointly develop a C-segment-class BEV SUV model for sale under each company's own brand. By combining their respective strengths, such as the all-wheel-drive technologies that Subaru has cultivated over many years and the vehicle electrification technologies that Toyota is employing to bring together other companies that share its aspirations, the two companies intend to take up the challenge of creating attractive products with appeal that only BEVs can offer.

Ever since concluding an agreement on business collaboration in 2005, Toyota and Subaru have been deepening their cooperation in various fields, including development, production, and sales. Examples include efforts that led to the start of sales of the jointly developed rear-wheel-drive Toyota 86 and Subaru BRZ in 2012 and the start of sales of Subaru's Crosstrek Hybrid original plug-in hybrid electric vehicle (HEV) in the United States, to which was applied knowledge related to Toyota's HEV technologies.

The automotive industry is in the midst of a once-in-a-century period of profound transformation. Starting with responses to the new CASE domains of car connectivity, autonomous or assisted driving, new mobility or car-sharing, and electrified powertrains and components, both Subaru and Toyota are required to conduct technological development with a sense of speed across a broader-than-ever spectrum of initiatives. Building on their collaborative ties so far, the agreement announced today represents a new area of collaboration that especially focuses on the urgent need to respond to CASE's "E" domain, or electrified powertrains and components.

In addressing vehicle electrification, due to significant variation in the energy situations of each country or region and in government policies, as well as due to resulting differences in environmental regulations, in the stages of infrastructure preparation, and in market needs for electrified vehicles, efficient and speedy development of appropriate products is a must. Furthermore, the commercialization of BEVs requires the use of large-capacity batteries, and, along with the popularization of BEVs, demands of a new dimension will be placed on battery supply. In addition, stemming from differences in how cars will be used due to maximum cruising ranges and the state of infrastructure construction, sales methods with a new approach will also be needed. These and other issues present a growing number of challenges related to costs, supply, and ways of selling.

To respond with a sense of speed to the diversifying needs of these markets and to multiple challenges, both Subaru and Toyota believe that it is necessary to pursue a business model that goes beyond convention, crossing over industrial boundaries together with various types of other entities that share their aspirations. As a first step in this direction, while accelerating productization by bringing together technologies that represent each company's strengths and cooperating where possible, the two companies will jointly develop a BEV-dedicated platform. The platform will be developed in a way that will make it broadly applicable to multiple vehicle types, including C-segment-class and D-segment-class sedans and SUVs, as well as to efficient development of derivative vehicle models.

Note from Subaru:
Following this agreement with Toyota, Subaru will now shift its existing BEV development resources to this new joint project. Within this new framework, Subaru will continue its efforts to create an attractive BEV SUV for our customers, while improving efficiencies in terms of engineering, development, purchasing, and other areas through the new joint project. 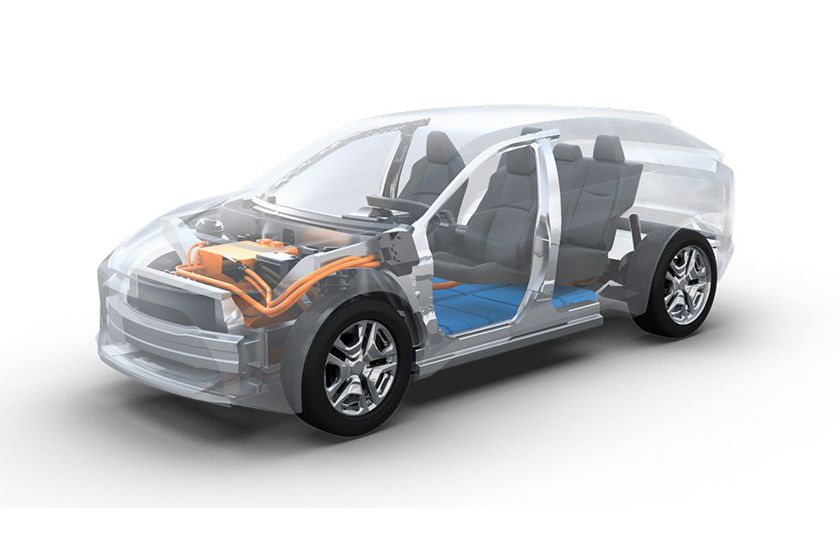 Image: A BEV-dedicated platform Toyota and Subaru will jointly develop