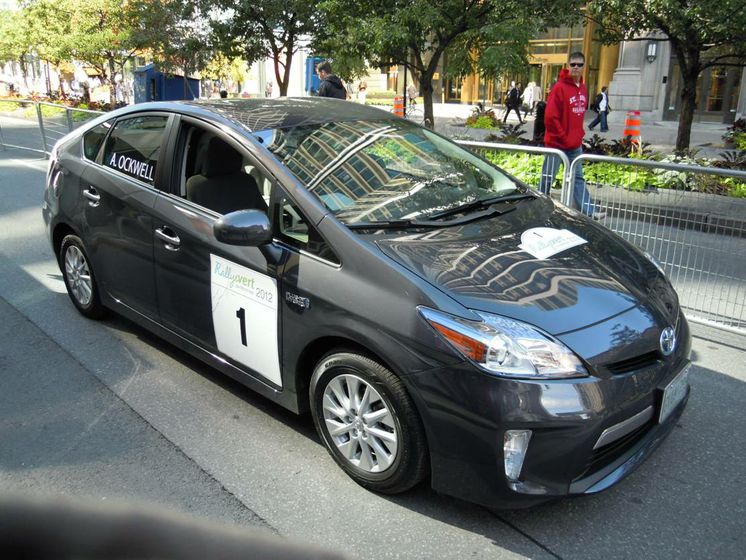 (TORONTO) – For the third straight year, the Toyota Prius Plug-In Hybrid (PHV) has led Toyota Canada to victory in the Rallye Vert de Montréal, a world championship of “green” rallies and the only Canadian stop on the global FIA Alternative Energies Cup circuit.
The PHV, with its unique Hybrid Synergy Drive® platform, placed first in fuel consumption, with only 19L of fuel used for the 530 km of rallying, or average fuel efficiency of 3.6L/100 km. As an additional highlight for the Toyota family, the Lexus CT 200h recorded the second-best efficiency, at 4.3L/100 km. The results are notable, particularly as other companies have been comparing the performance of their vehicles to the Prius, and results like these demonstrate how it remains the benchmark for green vehicles.
The PHV was also first in regularity (speed accuracy). A key element of winning the rally is a combination of the consumption and regularity rankings. By placing first in both categories the PHV was the rally’s decisive winner, and with the CT200h placing a strong second.
“The PHV has consistently demonstrated that its user-selectable EV mode for short trips and hybrid fuel efficiency for everything else is a winning combination,” said Stephen Beatty, Chief Environmental Officer of Toyota Canada Inc. “The key to victory for the PHV was its engine, which allows the driver to manually select between the EV and the hybrid mode seamlessly. The outstanding performance of the PHV and CT 200h in the Montreal rally was a compelling demonstration of the depth and breadth of Toyota’s leadership in green engineering.”
The PHV is built on a proven hybrid powertrain – technology Toyota has been offering to the market for more than 10 years. As of the end of August, 15,636 of the vehicles have been sold globally. The Prius PHV is now available for retail sale in Canada.
With the PHV winning the Montreal rally, Toyota Canada has earned a berth in the Rallye Monte Carlo des Energies Nouvelles, to be held next March. The Monaco event is the world’s oldest and most prestigious green rally. It will be the first rally on the 2013 FIA Alternative Energies Cup calendar.
The PHV was driven by Vinh Pham, Toyota Canada’s Advanced Technology and Powertrain Engineer, who was assisted by navigator Alan Ockwell. Pham was also behind the wheel when Toyota Canada claimed the 2011 title.
To learn more about the PHV and see photos of the Montreal rally, visit the Toyota Canada Prius Plug-in Facebook page: www.Facebook.com/ToyotaCanadaPriusPlugin.
For more information about the FIA's Alternative Energies Cup or Rallye International Vert de Montreal, visit:
http://www.rallye-alternative.com/
http://www.fia.com/en-GB/sport/championships/Pages/alternative.aspx
About Toyota Canada Inc.
Toyota Canada Inc. (TCI) is the exclusive Canadian distributor of Toyota, Lexus and Scion cars, SUVs and trucks. Toyota offers the most fuel efficient passenger car fleet in Canada, led by the industry’s largest selection of advanced technology vehicles such as the Toyota Prius. With a rich history of respect for the environment, Toyota Canada Inc. and its Dealerships align with like-minded organizations including Evergreen and through the Toyota Canada Foundation, Earth Day Canada, Scientists in School and the Traffic Injury Research Foundation (TIRF), to make things better where we live, work and play. TCI’s head office is in Toronto, with regional offices in Vancouver, Calgary, Montreal and Halifax and parts distribution centres in Toronto and Vancouver.
-30-

Awards and Accolades, English, Innovation and Technology, Environment, Corporate
‹ back