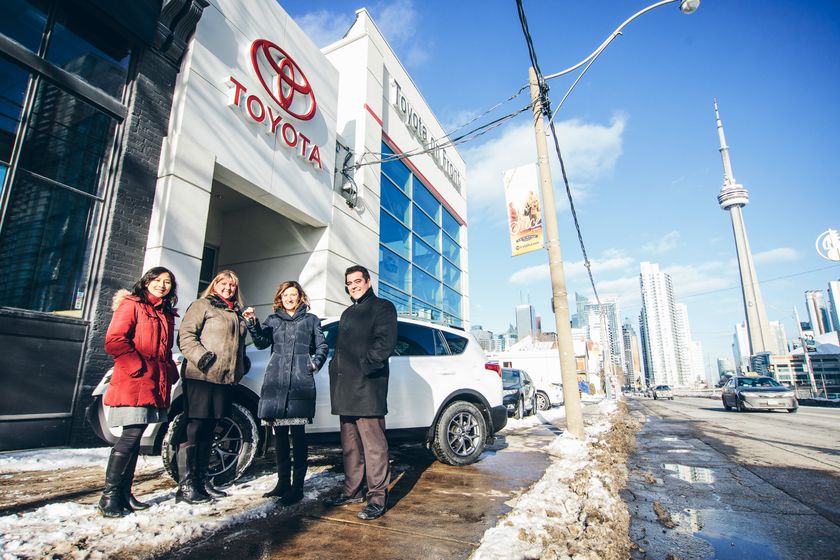 TORONTO, ON., (February 26, 2015) – Toyota Canada is donating a 2014 RAV4 to continue the next phase of safety research at the University of Toronto.

Industrial engineering professor Birsen Donmez is in the midst of a three-year study analyzing driver feedback systems. These are in-vehicle features that warn drivers to focus their attention on the road, including on-dash warning lights and auditory alarms.

The RAV4 donation will be integral to Prof. Donmez’s research that is focused on how drivers react to feedback systems, and discovering what kinds of systems are most effective in alerting and motivating people to drive safely. For example, she is looking at technology such as eye trackers that can improve responses to road events and inhibit potentially risky behaviours.

Prof. Donmez’s work is supported by Toyota’s Collaborative Safety Research Center (CSRC), which was formed in 2011. Toyota has committed $50 million to fund the CSRC, which to date has involved support for 26 research projects at leading North American universities, hospitals, research institutions and federal agencies. The projects are aimed at developing and bringing to market new and advanced safety technologies that help reduce the number of traffic fatalities and injuries

“Toyota is committed to innovative safety research towards our goal of making roads a safer place for individuals both inside and outside vehicles,” said Seiji Ichii, President and CEO, Toyota Canada Inc. “We are particularly excited about supporting this Canadian research initiative led by Professor Birsen Donmez with the Toyota RAV4 – a popular made-in-Canada vehicle.”

Safety research at the University of Toronto has helped make possible Toyota’s newest generation Driver Awareness Research Vehicle (DARV 1.5), which is part of ongoing research into the dynamics of driver distraction. The DARV 1.5, which was first displayed at the Aspen Ideas Festival in June, uses advanced technology, including Microsoft’s Surface and Kinect and custom biometric software and algorithms by Infosys, to help driver, passengers and the vehicle itself work together as a team to achieve safer driving.