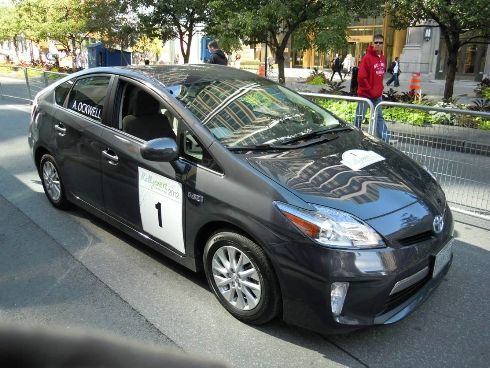 TORONTO, ON., (February 15, 2013) – After placing first at the Rallye Vert de Montréal this past October, Toyota Canada’s Prius PHV will make its second attempt for global environmental glory next month at the world’s oldest and most prestigious green rally – the Rallye Monte Carlo des Energies Nouvelles.
The Monaco rally, which will run March 21-23, kicks off the 2013 FIA Alternative Energies Cup season. Organized by the Automobile Club of Monaco, the event has been held each year since 2000, typically attracting about 100 competitors who must drive about 1,000 km over the course of three days.
The Alternative Energies Cup season features 12 green rallies, including one stop in Canada, the Rallye Vert de Montréal.Toyota Canada gained entry into the Monaco rally by winning the Montreal event for the 2nd time last October.
“Building on over a decade of knowledge with hybrid systems, the proven Toyota Hybrid Synergy Drive ® platform in the all-new Prius PHV has the reliability to tackle the timed stages and the twisty streets of Monte Carlo, plus any other challenges the rally poses,” said Stephen Beatty, Managing Director and Chief Environmental Officer at Toyota Canada Inc. “Shorter charging times and a light weight battery provide the added benefit of improved fuel efficiency over the competition in the rally and in everyday life. It offers the best of both worlds, with electric power being ideal for short trips in the city and hybrid mode perfect for longer drives.”
Available now in Toyota dealerships across the country, the all-new Toyota Prius PHV has the astonishing fuel efficiency of 3.8L/100km when in hybrid mode. It has an electric-only, city-driving range of approximately 25 kilometres on a full charge, and is capable of achieving highway speeds of up to 100 km/h in electric-only mode. For longer distances, when all-electric drive is depleted, it reverts automatically to full hybrid mode and operates like a regular Prius. Drivers wishing to switch between hybrid and electric mode simply need to push a button.
The vehicle utilizes a proven lithium-ion battery that can be charged from a conventional household electricity outlet or a public charging post. It has the fastest charging time of any plug-in vehicle on the market – approximately 180 minutes using a 110V outlet and 90 minutes with 220V.
To speak to the advantages of the Prius PHV before leaving for Monaco, driver Vinh Pham, Toyota Canada’s Advanced Technology and Powertrain Engineer, will be joined by navigator Alan Ockwell and their Toyota Prius PHV for an appearance at the Toronto International Auto Show.
While demonstrating how fast and easy it is to charge the PHV, Pham and Ockwell will be available to sign autographs and pose for photos, and will answer any questions visitors have about the vehicle.
They’ll be at the Toyota Canada booth, located at the 800 level of the South Hall, on Sunday, February 24, from 10 a.m. until 1 p.m.
For more information about the FIA's Alternative Energies Cup and the Rallye Monte Carlo des Energies Nouvelles, visit: fia.com/championship/alternative-energies-cup/alternative-energies-cup and acm.mc  respectively. Details on the Rallye Vert de Montréal are available atrallyevert.com/.
For more on the Prius PHV, including images of Toyota Canada’s green rally racing team visit, Facebook.com/ToyotaCanadaPriusPlugin or media.toyota.ca.
About Toyota Canada Inc.
Toyota Canada Inc. (TCI) is the exclusive Canadian distributor of Toyota, Lexus and Scion cars, SUVs and trucks. Toyota is the first full-line manufacturer to make all of the elements of the Star Safety System standard on every vehicle starting in 2011. The Star Safety System includes Vehicle Stability Control (VSC), Traction Control (TRAC), Anti-lock Brake System (ABS), Electronic Brake-force Distribution (EBD), Brake Assist (BA) and Smart Stop Technology (SST). TCI’s head office is in Toronto, with regional offices in Vancouver, Calgary, Montreal and Halifax and parts distribution centres in Toronto and Vancouver.
-30-

Corporate, English, Prius Prime
‹ back
Every effort has been made to ensure the product specifications, equipment, and content on this site are accurate based on information available at time of publishing. In some cases, certain changes in standard equipment or options may occur, which may not be reflected online. Toyota Canada reserves the rights to make these changes without notice or obligation.