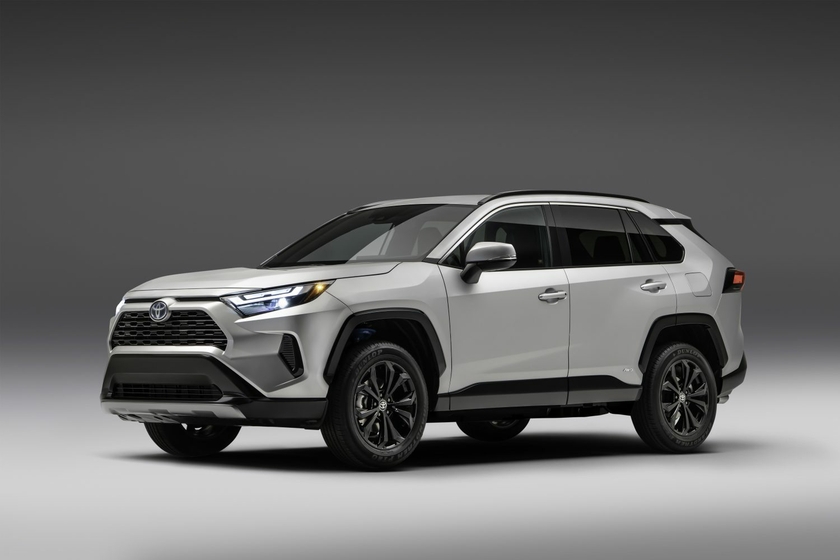 TORONTO, Ontario (November 12, 2021) – It’s been a quarter-century since Toyota introduced the ground-breaking model that went on to define a whole new type of passenger vehicle category. With ride, handling and comfort characteristics more akin to sedans than SUVs, the first RAV4 essentially created the template for what became the “crossover SUV” or just “crossover.” This unique vehicle left some mighty big footsteps to follow.

Following the RAV4’s arrival, the floodgates soon opened, with crossovers of all sizes and shapes eventually coming to dominate the SUV category and, ultimately, the Canadian automotive landscape. Now in its fifth generation, the Toyota RAV4 remains the leader in its size class, and it has also been Canada’s best-selling non-pickup passenger vehicle for two years.

With each of its five model generations, the RAV4 offered increased room, comfort, versatility and performance while delivering higher fuel efficiency. The 2022 Toyota RAV4 offers a new SE Hybrid grade, as well as a multitude of exterior and interior upgrades across all grades.

How did it all start?

By the early 1990s, SUVs were significantly rising in popularity as more buyers selected them for such defining features as enhanced ride height, ample cargo room and availability of four-wheel drive. The small SUVs in the market at the time that the original RAV4 debuted were built much like their larger cousins, using body-on-frame construction and solid-axle rear suspension. In a smaller SUV, this type of engineering generally yielded a bumpy, unrefined ride.

It turns out, that was exactly what a growing slice of the SUV market was looking for, especially younger buyers with active lifestyles. The RAV4 name originally stood for “Recreational Activity Vehicle: 4-Wheel Drive,” though the model would always offer a choice between front-wheel drive or all-wheel drive.

The first RAV4 was available as five-door and three-door models, but the four-door version dominated sales in Canada and was the only body style to return with the second-generation RAV4 in 2000.

If one were to compare the current RAV4 with its ancestor, the two might seem worlds apart. The latest model is much larger than the original, yet still “right sized” for the class. It is much more powerful, yet also much more fuel efficient. The RAV4 offers greater comfort, along with amenities, safety technology, multimedia and connectivity features that simply did not exist 25 years ago.

Yet, both the first-generation RAV4 and the current model share Toyota’s renowned core traits and values of quality, reliability and durability.

The RAV4 came to Canada in September 1996 in three-door and five-door models. This new-wave SUV adopted proven Toyota engineering with a 120-horsepower 2.0-litre four-cylinder engine. The optional all-wheel-drive system came from the Camry and Celica All-Trac models. (How times change: today’s Camry adopted its optional AWD system from the RAV4.)

In the popular five-door form, the original RAV4 was 4,115 mm  long on a 2,400 mm wheelbase, making it two feet shorter than the Camry sedan and a cinch to grab “compact only” parking spaces. With the popular optional four-speed automatic transmission and all-wheel drive, the 1997 RAV4 four-door delivered an NRCan-estimated fuel consumption of 12.6 / 10.3 / 11.5 L/100 km (city / highway / combined, figures adjusted to the NRCan’s current testing protocol).

Especially when equipped with its optional all-wheel drive system, the first RAV4 appealed to outdoors-oriented customers who found the vehicle’s enhanced traction and ground clearance more than capable for pursuing activities like hiking, mountain biking, skiing, snowboarding, kayaking and more. At the same time, the RAV4 won over a wide array of customers by serving as an ideal everyday vehicle, preserving the comfort and handling characteristics similar to compact sedans.

The second-generation RAV4, available only as a five-door, brought the compact crossover SUV into the 21st century with arresting style in a slightly larger, more versatile package. The sophisticated, sharply creased shape emerged from Toyota’s Calty design works in California. The look was more upscale outside and in. The cabin delivered on that promise by adding a slew of new available upgrades, including several packages and new features such as an available six-disc CD changer.

Beneath the eye-catching sheet metal, the RAV4 grew slightly, with a 90 mm longer wheelbase benefitting interior room, especially the rear seat. Yet, at just 4,195 mm long, the second-generation RAV4 was still super-agile and as easy to drive as a compact sedan. There was big news under the hood, with the 2.0-litre engine gaining Toyota’s Variable Valve Timing with intelligence (VVT-i) and boosting output to 148 horsepower and 135 lb-ft of torque.

The next RAV4 was yet another gamechanger. Toyota had already introduced the Highlander as a larger crossover, which presaged a larger third-generation RAV4 for 2006. Riding on an all-new platform that was significantly longer and wider, the 2006 RAV4 offered much more cabin room than before while maintaining a trim exterior size. The third-generation RAV4 introduced a contemporary, aerodynamically sleek and sporty design with sharp character lines.

The wheelbase grew to 2,660 mm, and length was up 405 mm to 4,600 mm. This proved to be the new “right size” for a segment that was becoming better defined. The newly enlarged RAV4 offered optional third-row seating.

The RAV4 was now offered in three distinct grades; Base, Sport, and Limited, all available in Canada with a new standard full-time electronically controlled all-wheel drive with a manual locking switch. The standard 2.4-litre four-cylinder engine with VVT-i delivered 166 horsepower.

The topper, though, was an available 268-horsepower 3.5-litre V6 engine. Four-cylinder models used a standard four-speed automatic transmission, while the V6 was teamed with a five-speed automatic and a 0-100 km/h time of 6.6 seconds. The RAV4-specific platform featured redesigned suspension and a new electronic power steering system to deliver significantly improved ride and handling. The Sport grade featured standard 18-inch alloy wheels for enhanced agility, along with specific exterior and interior trim.

With cabin space now on par with mid-size SUVs, the enlarged RAV4 allowed Toyota to also introduce a larger, second-generation Highlander in 2007, further defining yet another growing segment.

The fourth-generation RAV4 arrived for the 2013 model year and solidified Toyota’s segment leadership. The model’s boldest styling yet enveloped a new high-strength structure and debuted a new powertrain. With ample cargo room and the highest fuel efficiency rating of any RAV4 to that point were just the kind of bonuses that ensured RAV4’s continued dominance. The efficiency rating would go higher still with the first RAV4 Hybrid introduced for 2016.

A significant upgrade for 2016 gave the RAV4 a quieter, more refined interior. The bigger story, though, was the first RAV4 Hybrid. Its innovative Electronic On-Demand All-Wheel-Drive System with intelligence (AWD-i) used an independent rear wheel motor to enhance traction when needed. The Hybrid not only had RAV4’s best fuel efficiency with an NRCan-estimated combined fuel consumption of 7.2 L/100km, but also offered the quickest acceleration performance in the line.

In its final year, the fourth-generation RAV4 gained a new Trail model for some off-road capability and sporty style, setting the stage for even more capable RAV4 variants to come.

Current Generation: Still the Leader of the Pack

The fifth-generation RAV4, introduced for 2019, offers the model’s widest selection ever, including first-ever RAV4 TRD Off-Road, the Hybrid offered in LE, XLE, XSE and Limited grades, and the flagship RAV4 Prime PHEV with an NRCan-estimated range of 68 km on all-electric battery power alone.

Engineered to tackle urban, suburban, and outdoor adventures, the fifth-generation RAV4 is built on Toyota New Global Architecture (TNGA-K) platform. With a boldly chiseled design inspired by Toyota’s tough trucks, this latest RAV4 amplifies the desirable crossover traits that made the first RAV4 an instant success a quarter-century ago. Depending on model grade and options, the current RAV4 can be whatever the customer needs it to be, from the exceptionally well equipped LE model to a technology tour de force plug-in hybrid, with various levels of luxury and adventure in between.

In gas models, the 203-horsepower Dynamic Force 2.5-litre four-cylinder gas engine is paired with an 8-speed Direct-Shift automatic transmission. This combo has an impressive NRCan-estimated fuel consumption of 8.5 / 6.8 / 7.7 L/100 km (city / highway / combined) in the front-wheel drive model equipped with Stop/Start, the best ever for a gas RAV4.

The RAV4 Hybrid models have a NRCan-estimated combined fuel consumption of 6.0 L/100km, a nearly 20-percent improvement over the previous Hybrid. Likewise, the Hybrid’s e-AWD improves over the previous system, now with the independent rear motor operating proactively to enhance traction even before front wheel slippage is detected.

At the top of the model line, the RAV4 Prime PHEV (plug-in hybrid) is both the performance and efficiency leader. The RAV4 Prime has an all-electric range rating of 68 km on battery alone on a single charge. Or, operating in hybrid mode, it can generate a combined 302 horsepower and do 0-100 km/h in just 6.0 seconds, the second quickest Toyota in the lineup behind Supra. Available in the sporty SE and XSE grades, the RAV4 Prime has an NRCan-estimated combined fuel consumption of 2.5 Le/100 km. Standard Electronic On-Demand AWD delivers all-weather traction using an independent rear motor.

In every RAV4, Toyota Multimedia includes hands-free access to Apple CarPlay® and Android Auto™ compatibility. Integrated Dynamic Navigation and JBL® Premium Audio are available. In gas and Hybrid RAV4s, a 7-inch and 8-inch touchscreen is available, depending on model grade; the RAV4 Prime XSE features a 9-inch screen.

A pioneer and leader in crossover SUVs from the start, Toyota currently offers the sporty, compact C-HR, all-new Corolla Cross, Venza, RAV4, and Highlander in this expansive space. Whatever comes next in crossovers, and however it is powered, expect Toyota to continue leading the way.

Keeping in line with Toyota’s focus to find ways to continuously improve and upgrade the RAV4, the same will ring true for the 2022 model year.

For 2022, the RAV4 is getting some enticing updates, including a new SE Hybrid grade as well as some exterior and interior updates across all grades.

Designed for customers looking for sporty performance and sporty style but at a lower price compared to the XSE, the new SE Hybrid grade for RAV4 includes mono-tone paint, fabric trimmed seats and a 7-inch touchscreen with six speakers. And the SE Hybrid grade’s standard features are exceptional, as well as smartly packaged. In Canada, the SE Hybrid offers standard heated leather steering wheel, heated front seats and rain-sensing windshield wipers with a de-icer function.

RAV4 gets some enticing exterior and interior features across all grades when it goes on sale next month. The RAV4 XSE gets a bold new colour in Calvary Blue with a black roof. In fact, Calvary Blue will also make its way on the new SE Hybrid grade, as well as the existing TRD Off-Road.

XLE grades and above get updated headlamps– both for style and for capability improvement. New LED foglamps are being introduced for Limited, Trail and TRD Off Road.

And the XSE Hybrid gets the super sleek vertical lights that debuted on the XSE Prime in 2021.

More details on the 2022 RAV4, including pricing, will be released in mid-December.