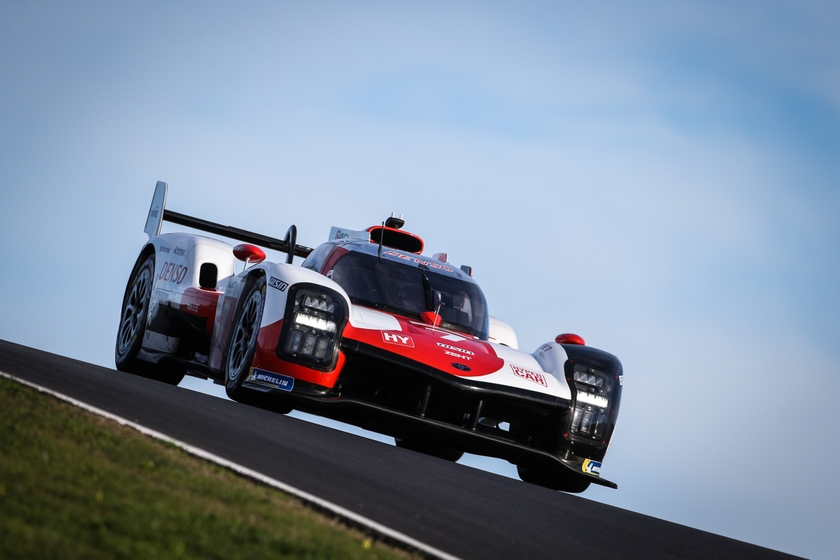 TORONTO, ONTARIO – April 23, 2021 – TOYOTA GAZOO Racing will begin a new era with its GR010 HYBRID Hypercar when the road to the Le Mans 24 Hours opens at the 6 Hours of Spa-Francorchamps in Belgium, the opening round of the 2021 FIA World Endurance Championship (WEC) on May 1st.

A direct successor to the legendary Group C period of the 1980s and 1990s, the spectacular LMP1 era has reached its conclusion, handing over the top category of endurance racing to the Le Mans Hypercar generation.

Reigning World Champion and three-time Le Mans winner TOYOTA GAZOO Racing is the first manufacturer on the Hypercar grid in 2021, alongside Scuderia Cameron Glickenhaus, with Audi, Ferrari, Peugeot and Porsche among those joining the battle in the coming years.

Following an intense pre-season testing program, the all-new GR010 HYBRID Hypercar is ready for its race debut as the team aims to defend its world titles and win a fourth consecutive the Le Mans 24 Hours with an unchanged driver line-up.

Despite thousands of testing kilometres already completed at three different circuits since the GR010 HYBRID first turned a wheel in October last year, the final step of preparation for Spa is still to come, with a two-day official Prologue test taking place at the legendary Belgian circuit on 26-27 April.

That represents the first time the GR010 HYBRID will be on track with rival cars, giving the team and drivers an important opportunity to evaluate the new car in traffic and against its main competitors Alpine, which races a grandfathered LMP1 car.

The GR010 HYBRID features a front motor generator unit, delivering 272 hp of hybrid power and four-wheel-drive traction at speeds over 120km/h. Combined with a 3.5litre V6 engine, the driver has 680 hp at his disposal, with no restrictions on fuel usage. In contrast, the TS050 HYBRID weighed 162 kg less and boasted 1000 hp, although strict per-lap fuel restrictions effectively limited top speeds.

With such fundamental differences compared to its all-conquering predecessor, drivers will need to adapt their approach, while engineers fine-tune the new Hypercar for maximum performance, particularly when passing the slower LMP2 and GT cars.

Aside from on-track performance, the whole team also has to adapt to new regulations which limit the size of the operational crew at the circuit to 43. This cost-saving measure requires significant reorganisation and flexibility from the mechanic and engineering crews to maintain their high standards of on-track support, with Spa being the first time the slimmed-down team will operate in a competitive environment.

A challenging start to the week is therefore expected, with a combined 12 hours of testing on Monday and Tuesday for the Prologue before the race event begins with a single practice session on Thursday. A busy Friday sees two practice sessions before the starting grid for Saturday's race is decided in a new qualifying format, when one driver per car will set a single flying lap.

TOYOTA GAZOO Racing has an excellent record at Spa-Francorchamps, with five victories since its first WEC race there in 2013 and, despite a strong challenge expected from its competitors, the target is to start the season with maximum points.

“This is the start of an exciting new Hypercar era for endurance racing, where many leading competitors will fight against each other at Le Mans. The fans are all looking forward to this, and we share their enthusiasm. I am proud that TOYOTA GAZOO Racing will be on the grid at the start of this era. Our TS050 HYBRID marked the end of the first phase of our WEC project; we battled hard to improve our racing hybrid technology, and this is now contributing to make ever-better cars for Toyota customers. Now we start a second phase and we must again fight as one team to push the limits of our racing hybrid, to deliver more exciting sports cars in the future to our GAZOO Racing customers. Through the GR010 HYBRID, we will enhance our people, technology and processes. This season will not be easy because we face determined competitors who will push us hard, but I know the team will never give up.”

“The Spa event marks the end of our pre-season testing activities with the GR010 HYBRID, and the start of a new phase in the short life of our Hypercar. Since the roll-out in October 2020 at Paul Ricard, we have completed an intense programme of testing, learning progressively more about the car's characteristics and the new Michelin tyres. With such different weight and performance parameters compared to the TS050 HYBRID, and totally new mandatory systems, it has been a steep learning curve for engineers and drivers. As often with testing, it has not gone entirely smoothly; we lost a complete three-day test at Aragon due to heavy snow and the weather was unkind to us elsewhere as well. Luckily the later start to the season allowed us to fit in additional tests before Spa so we have eventually hit our mileage target and ticked all the boxes before the first race.”

“I am really excited to kick off the new season and the new Hypercar era. I am absolutely ready to go; I know I have great team-mates in Kamui and José, plus a fantastic team around us, and we are fired up to retain our World Championship. A lot of work has gone into the GR010 HYBRID already and we need to do more to realise its full potential; we are continuously working to make improvements. Spa is an important step in that process so it's a race I am very much looking forward to.”

“I am really happy to be racing again, despite the difficult global situation. The circumstances have not been ideal but the team did a great job to make progress with the GR010 HYBRID to be ready for the first race. We have learned a lot about the car during our tests and we can expect some surprises; that's normal with a new car. It's an exciting challenge for us to see what it can do in a race environment, with traffic management and against strong competitors in the Hypercar class.”

“It feels like a long time since Bahrain, when Mike, Kamui and I became World Champions. We have all enjoyed that feeling but now it's time to race again and fight to keep the title, and to finally win Le Mans. The whole team has worked hard, despite the difficult circumstances, to get our GR010 HYBRID ready for Spa. It's always an interesting challenge to develop a completely new car and the process in ongoing; we're all pushing to make good progress at Spa with a strong performance.”

“I will be very happy to get to Spa for the Prologue and the first race after a long winter of preparation. It's a new car and a new era for endurance with Hypercar so there is a lot for the fans to look forward to. We have done a few tests since the start of the year, starting the process of getting to know the car and fine-tuning set-ups to be ready for Le Mans. I feel ready for the first race and I am really eager to experience the car against our Hypercar competition.”

“It is exciting to be going to Spa for our first time with the GR010 HYBRID in a competitive situation. It has been a tricky winter, particularly for me because I had to miss some tests due to my Japanese racing commitments then we lost the test in Aragon due to snow. So it has not been easy but the team has worked really hard to get ready for the start of this Hypercar era with the GR010 HYBRID. I am cautious but optimistic; it's a new challenge for everyone to look forward to.”

“We've completed quite an extensive test programme leading up to the first race of the new Hypercar era and we feel well prepared. There is a lot of excitement throughout the whole team, as well as amongst the fans, to see what these new cars will look like on track and to see how close the racing is going to be. So, everyone is looking forward to competing again at Spa, which is a great circuit to see the Hypercars race for the first time.”