Toyota Opens a Portal to the Future of Zero Emission Trucking 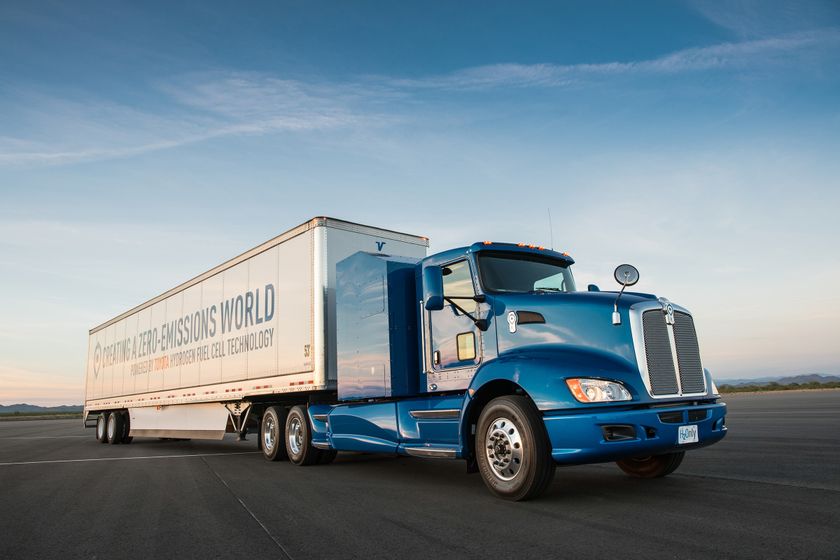 LOS ANGELES (April 19, 2017) — Picture the 710 Freeway heading south, bumper-to-bumper semis hauling cargo to and from the bustling Ports of Los Angeles and Long Beach. Now imagine those trucks are moving that cargo, quietly, quickly and without producing any emissions.  Toyota is working to make this vision a reality.

Today Toyota Motor North America, Inc. (TMNA) revealed “Project Portal” - a hydrogen fuel cell system designed for heavy duty truck use at the Port of Los Angeles. Announced at a press conference with Port officials and representatives from California Air Resources Board (CARB) and the California Energy Commission (CEC), the zero-emission truck proof of concept will take part in a feasibility study examining the potential of fuel cell technology in heavy duty applications. The study will begin this summer and contribute to the Port’s Clean Air Action Plan, which has dramatically reduced harmful emissions from operations at the Ports of Long Beach and Los Angeles since 2005.

“As they did with the Prius and the Mirai, Toyota is taking a leap into the future of technology. By bringing this heavy duty, zero emission hydrogen fuel cell proof of concept truck to the Port, Toyota has planted a flag that we hope many others will follow,” said Mary D. Nichols, Chair, California Air Resources Board (CARB). “CARB will be following the progress of this feasibility study with interest, as we look to develop the best mix of regulations and incentives to rapidly expand the market for the cleanest, most efficient big trucks to meet the need for dramatic change in the freight sector.

Project Portal is the next step in Toyota’s effort to broaden the application of zero-emission fuel cell technology that can serve a range of industries. It is a fully functioning heavy duty truck with the power and torque capacity to conduct port drayage operations while emitting nothing but water vapor. Heavy duty vehicles make up a significant percentage of the annual emissions output at the Port of Los Angeles, and the Portal feasibility study may provide another path to further reduce emissions.

“Toyota believes that hydrogen fuel cell technology has tremendous potential to become the powertrain of the future,” said TMNA Executive Vice President Bob Carter. “From creating one of the world’s first mass market fuel cell vehicles, to introducing fuel cell buses in Japan, Toyota is a leader in expanding the use of versatile and scalable zero-emission technology. With Project Portal, we’re proud to help explore the societal benefits of a true zero emission heavy-duty truck platform.”

The Project Portal platform is designed to provide the target performance required to support port drayage operations. The truck generates more than 670 horsepower and 1325 pound feet of torque from two Mirai fuel cell stacks and a 12kWh battery, a relatively small battery to support class 8 load operations. The concept’s gross combined weight capacity is 80,000 lbs., and its estimated driving range is more than 200 miles per fill, under normal drayage operation.

“The Port of Los Angeles is excited to collaborate with Toyota to explore the feasibility of fuel cell technology for port drayage operations,” said Tony Gioiello, Deputy Executive Director of Port Development, Port of Los Angeles. “Our port and industry stakeholders have demonstrated their leadership in reducing pollution from port-related operations, and we see the potential of Toyota's zero-emission heavy-duty truck technology as another solution to meet the long-term goals of the San Pedro Bay Ports Clean Air Action Plan.”

Project Portal is just one part of Toyota’s ongoing commitment to fuel cell technology and the potential of a hydrogen society. It follows on the company’s continued work to expand California’s hydrogen refueling infrastructure, including the recently announced partnership with Shell to increase the number of hydrogen refueling stations in the state.

“Hydrogen fuel cell vehicles play a role in California’s efforts to achieve greenhouse gas emission reduction goals, improve air quality, and reduce our reliance on fossil fuels,” said Janea A.Scott, Commissioner, California Energy Commission.  “That’s why the California Energy Commission is investing in the refueling infrastructure needed to support adoption of these vehicles. The Commission applauds Toyota for putting this cutting edge technology to use a heavy-duty freight proof of concept. This demo will show how fuel cells can help support the heavy-duty sector’s efforts to increase efficiency, transition to zero-emission technologies, and increase competitiveness.”