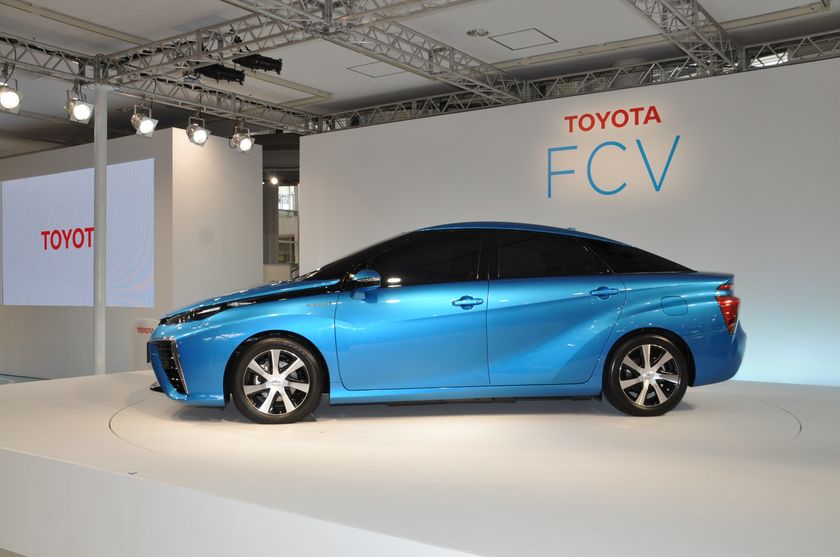 Toyota City, Japan (June 25, 2014) —Toyota Motor Corporation (TMC) has revealed the exterior design and Japan pricing of its hydrogen fuel cell sedan, first unveiled as a concept at the Tokyo Motor Show last year.
The car will launch in Japan before April 2015, and preparations are underway for launches in the U.S. and European markets in the summer of 2015.
In Japan, the fuel cell sedan will go on sale at Toyota and Toyopet dealerships, priced at approximately 7 million yen (MSRP; excludes consumption tax). Initially, sales will be limited to regions1 where hydrogen refueling infrastructure is being developed. U.S. and Europe prices have not yet been decided. Likewise, more detailed information, such as specifications, exact prices and sales targets, will be announced later.
Toyota’s commitment to environmentally friendly vehicles is based on three basic principles: embracing diverse energy sources; developing efficient, low-emission vehicles; and driving real and positive environmental change by popularizing these vehicles.
Hydrogen is a particularly promising alternative fuel since it can be produced using a wide variety of primary energy sources, including solar and wind power. When compressed, it has a higher energy density than batteries and is easier to store and transport. In addition to its potential as a fuel for home and automotive use, hydrogen could be used in a wide range of applications, including large-scale power generation.
Toyota has been developing fuel cell vehicles in-house for more than 20 years. Toyota’s fuel cell system includes a proprietary FC Stack, which generates electricity from the chemical reaction between hydrogen and oxygen, and high-pressure hydrogen tanks. In 2002, Toyota began leasing the “Toyota FCHV”, a fuel cell SUV, on a limited basis in Japan and the U.S.
Significant improvements have been made to the FC system since 2002. The fuel cell sedan Toyota revealed today, for example, features performance similar to a gasoline engine vehicle, with a cruising range2 of approximately 700 km (according to Toyota measurements taken under the Japanese Ministry of Land, Infrastructure, Transport and Tourism’s JC08 test cycle) and a refueling time of roughly three minutes. When driven, it emits only the water vapor produced by the reaction between hydrogen and oxygen.
Fuel cell vehicles contribute to the diversification of automobile fuels, emit no CO2 or environmentally harmful substances during operation, and offer the convenience of gasoline-powered cars. Toyota believes they have a great deal of potential, and are ideal environmentally friendly vehicles for promoting a sustainable mobility society.
Toyota Group3 companies are also engaging in other hydrogen-related initiatives, such as developing and testing fuel cells for use in homes, and developing fuel cell forklifts and fuel cell buses.
1Saitama Prefecture, Chiba Prefecture, Tokyo Metropolis, Kanagawa Prefecture, Yamanashi Prefecture, Aichi Prefecture, Osaka Prefecture, Hyogo Prefecture, Yamaguchi Prefecture, and Fukuoka Prefecture
2Testing performed with full hydrogen tank
3http://www.toyota-global.com/company/profile/toyota_group/