Share
Display to Include Latest Fuel Cell Vehicle and Four Other World-premiere Concepts
Tokyo, Japan, (November 5, 2013) — Toyota Motor Corporation will display five world-premiere concept vehicles in its Toyota exhibit at the 43rd Tokyo Motor Show. The show, to be held at Tokyo Big Sight in Koto Ward, Tokyo, will run from November 20 to December 1.

Under the slogan "Fun to Drive, Again,"*the concept vehicles convey Toyota’s vision of a future mobility society that values the joy of driving. The vehicles on display embody Toyota’s efforts to contribute positively to society while creating ever-better cars that exceed expectations.

The Toyota display will include a concept version of the fuel cell vehicle scheduled for launch around 2015, as well as a next-generation taxi designed with usability and hospitality in mind and a concept car that connects with its driver in an easy-to-use, intuitive manner.
Overview of Toyota’s World-premiere Concept Vehicles at 2013 Tokyo Motor Show
The booth will also feature the “Aqua G Sports” compact sports hybrid, the “Toyota i-Road,” a personal mobility vehicle which made its world debut at the Geneva Motor Show in March this year, and the “FT-86 Open concept”, a rear-wheel-drive sports convertible.

*References the Toyota-brand catchphrase "Fun to Drive", which was used in domestic Japanese advertisements from 1984 through 1987; the slogan was also used at the 2011 Tokyo Motor Show 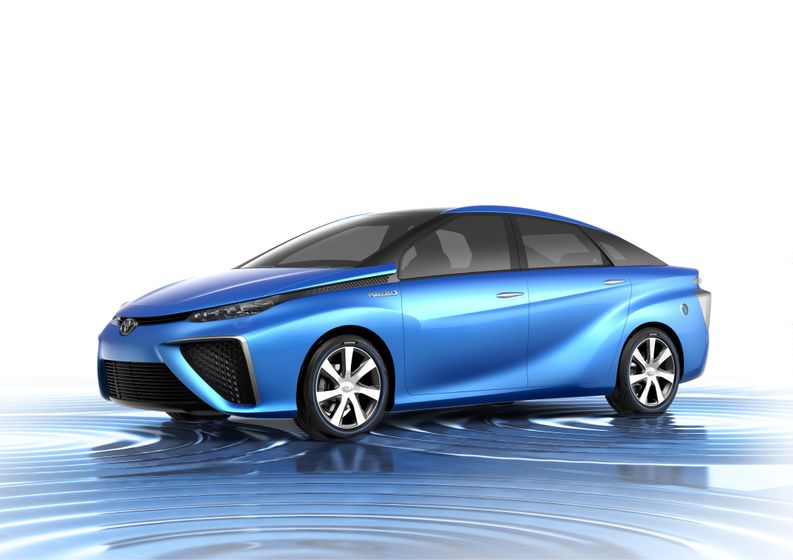 The Toyota FCV Concept is a practical concept of the fuel cell vehicle Toyotaplans to launch around 2015 as a pioneer in the development of hydrogen-powered vehicles. The vehicle has a driving range of at least 500 km and refueling times as low as three minutes, roughly the same time as for a gasoline vehicle.

The vehicle’s exterior design evokes two key characteristics of a fuel cell vehicle: the transformation of air into water as the system produces electricity, and the powerful acceleration enabled by the electric drive motor. The bold front view features pronounced air intakes, while the sleek side view conveys the air-to-water transformation with its flowing-liquid door profile and wave-motif fuel cap. The theme carries to the rear view, which conveys a catamaran’s stern and the flow of water behind.

The Toyota FC Stack has a power output density of 3 kW/L, more than twice that of the current “Toyota FCHV-adv” FC Stack, and an output of at least 100 kW. In addition, the FC system is equipped with Toyota’s high-efficiency boost converter. Increasing the voltage has made it possible to reduce the size of the motor and the number of fuel cells, leading to a smaller system offering enhanced performance at reduced cost.

Fully fueled, the vehicle can provide enough electricity to meet the daily needs of an average Japanese home (10 kWh) for more than one week. 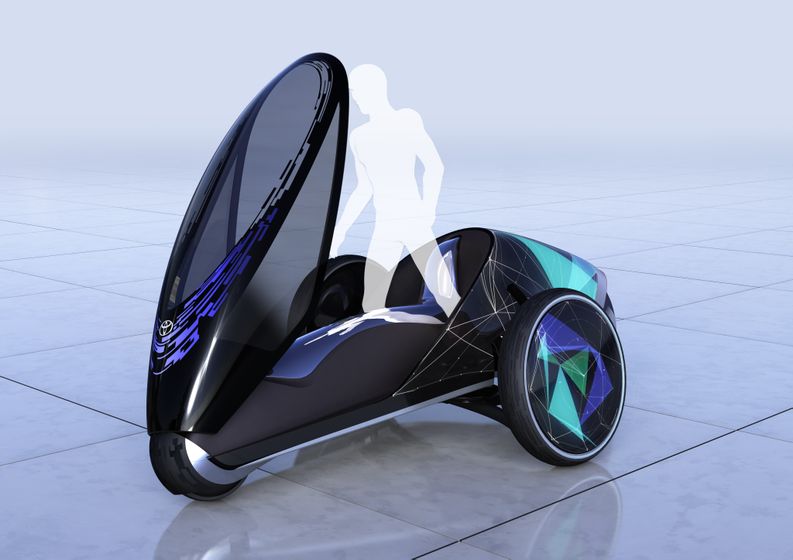 The Toyota FV2 is a concept car that can express Toyota’s “Fun to Drive” philosophy even in a future world in which vehicle technology has greatly progressed. The vehicle enhances the driving experience by connecting physically and emotionally with the driver, becoming more fun to drive the more it is used.

Physical connection: Rather than using a steering wheel, the Toyota FV2 is operated by the driver shifting his or her body to intuitively move the vehicle forward and back, left and right. In addition, by using intelligent transport system technology to connect with other vehicles in the area and traffic infrastructure, the Toyota FV2 helps enable safe driving by providing a wide variety of safety information, including advance warnings about vehicles in blind spots at intersections.

Emotional connection: Toyota envisions an ever-developing driver-vehicle relationship similar to the relationship of trust and understanding that a rider might have with his or her horse. By incorporating technology from the “Toyota Heart Project”, both the driver and the Toyota FV2 can grow together. The vehicle uses voice and image recognition to determine the driver’s mood, accumulated driving history to suggest destinations, and driving skill information to assist the user. In addition to an augmented reality (AR)1 display on the windshield, the body color and exterior display can be changed at will, creating a more intimate relationship between vehicle and driver.

Toyotahas created an exclusive smartphone application that enables users to experience the mobility of the future envisioned by the Toyota FV2. The application, released today, can be downloaded free of charge through the AppStore2 and Google Play3 application platforms.

In addition to simply talking and listening, humans and artificial intelligence will be able to engage in emotional communication, including expressions, gestures, and recollection of past events, thanks to research through an open innovation4 method.

The Toyota Heart Project is also conducting research to realize artificial intelligence that grows together with people, intelligence that displays feelings and evokes fondness and trust. The aim is to inspire people, achieve a rapport between humans and machines, and make life more enjoyable and enriching.

1Technology that supplements sensory information received from the user’s environment with computer-generated data
2AppStore is a trademark of Apple Inc.
3Google Play is a trademark of Google Inc.
4Research and development technique that transcends organizational frameworks to gather diverse knowledge and technology 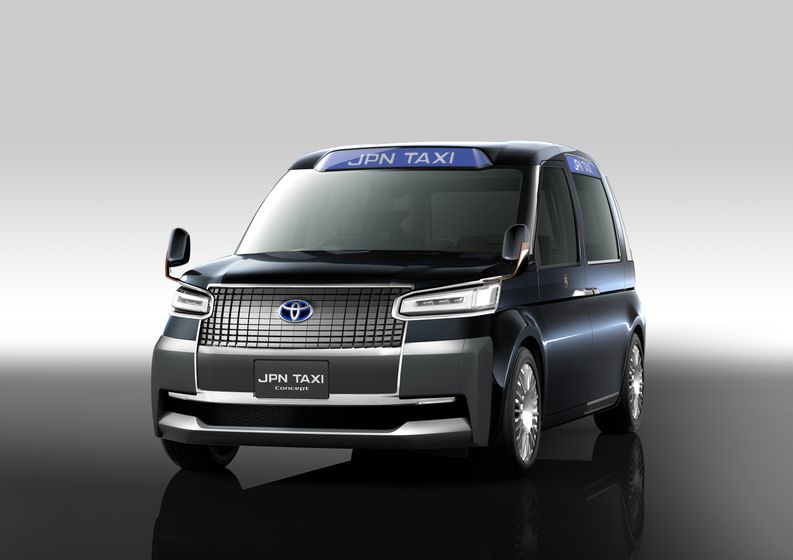 The JPN Taxi Concept offers ease of ingress and egress and a comfortable interior space with a body size that allows for outstanding maneuverability. The large electrically operated doors and low, flat floor enable passengers to board and exit in comfort, particularly children and seniors. The open, roomy interior has been designed to ensure ease-of-use at all times.

The design features familiar taxi proportions, with an electrically operated sliding door on the passenger-seat side. The display panel and lamps were selected with visibility and safety in mind.

The interior design conveys hospitality, placing priority on universal design principles and modern expression. A large monitor provides information to passengers, such as the route to the destination and taxi fares. Air conditioning and lighting have also been optimized to provide the most comfortable space possible. For the driver, there are specially designed instruments and gauges for taxi use.

The vehicle has been created in line with the Japanese Ministry of Land, Infrastructure, Transport and Tourism’s promotion of barrier-free buses and taxis tailored to regional needs.

The Voxy and Noah concepts are next-generation spacious minivans that provide the roomy interior needed by families and integrate higher levels of fun, utility and fuel economy. A new, low-floor package creates a class-leading roomy interior with outstanding ease of ingress and egress. These seven-seater vehicles feature ultra-long sliding Captain Seats1 in the second row, a first for its class, providing a diverse range of seating arrangements.

A 2.0-liter gasoline engine variant and a 1.8-liter hybrid variant with a class-first full hybrid system have been created for both the Voxy Concept and the Noah Concept. Optimal placement of the hybrid battery makes it possible to maintain the spacious utility of a minivan and achieve exceptional class-leading fuel efficiency and cruising ranges.

The vehicles share “emotional space” as their design concept, and the vehicle bodies convey the roominess of the interior even from the outside. Both vehicles create distinct and alluring impressions. The front view of the Noah Concept presents sophistication as a compact minivan, while the Voxy Concept employs exclusive aerodynamic parts to emphasize the low center of gravity, impressive wide-body, and the overwhelming sense of presence.

Welcab2 versions of the Noah and Voxyconcepts are equipped with a forward ramp and custom installed seat for wheelchair users. The two concepts propose a new style of Welcab that can be used as an ordinary vehicle in situations where a wheelchair is not needed. To facilitate comfortable wheelchair mobility, the concepts are compatible with a variety of wheelchairs, including one Toyota is developing with a tilt-down mechanism.

Market versions of the Noah and Voxy concepts are scheduled for launch in the Japanese market in early 2014.

1Passenger seats located in the second or third row of a minivan; similar to the seats in the front row
2Toyota’s specially equipped vehicles for those requiring physical assistance 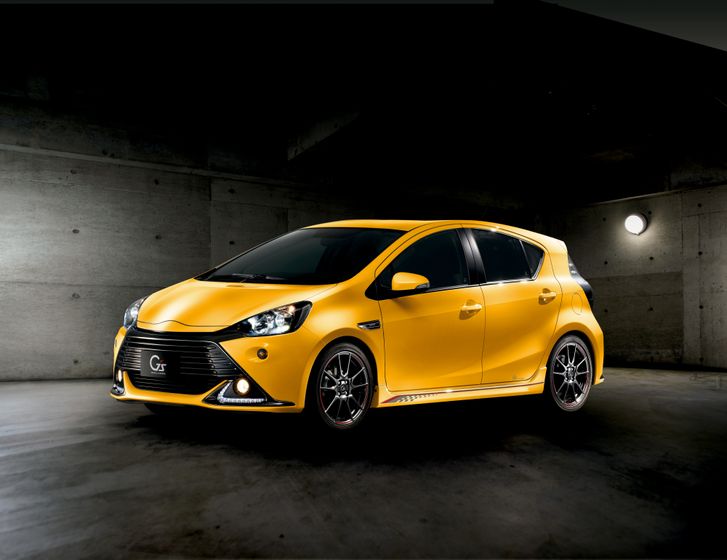 The Aqua G Sports is a fun-to-drive, sports-conversion compact hybrid sports car with powerful, sleek and inspiring styling and excellent fuel efficiency. The vehicle has been fully tuned by GAZOO Racing* drivers to offer a wider range of consumers a taste of racing and the joy of driving.

The market version of the Aqua G Sports is scheduled for launch in the Japanese market in late November.

*Part of GAZOO, an initiative aiming to promote automobile culture and spread Toyota’s “fun to drive” message. GAZOO Racing lets test drivers participate in the development of ever-better cars by racing them. 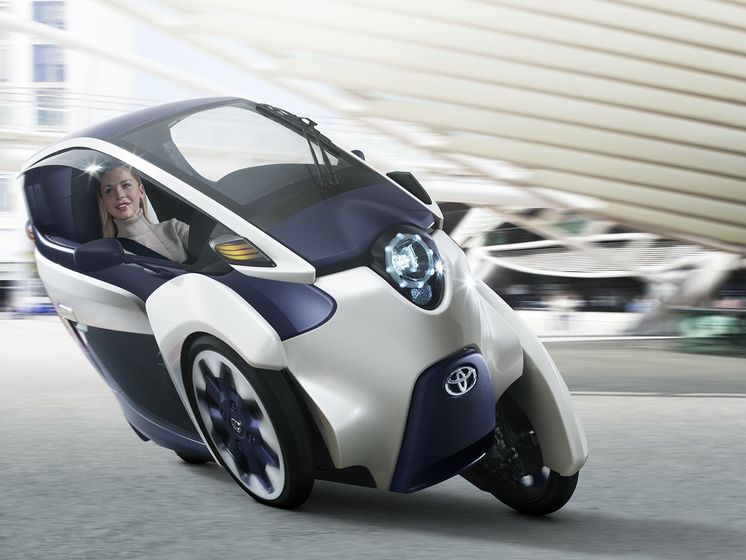 The Toyota i-Road is an ultra-compact mobility package that provides the convenience of a motorcycle and the comfort and stability of a car, offering an enjoyable riding experience unlike either a car or a motorcycle.

With a length of 850 mm and a compact closed cabin, the concept adopts a newly developed active lean system that raises and lowers the left and right front wheels to automatically optimize the vehicle angle, ensuring a stable ride and providing an unprecedented feel of unity with the vehicle.

Starting next year, the Toyota i-Road will be used in verification tests of the Ha:mo urban transport system in Toyota city, Japan, as well as in an ultra-compact urban EV car-sharing project to be conducted in the city of Grenoble, France. 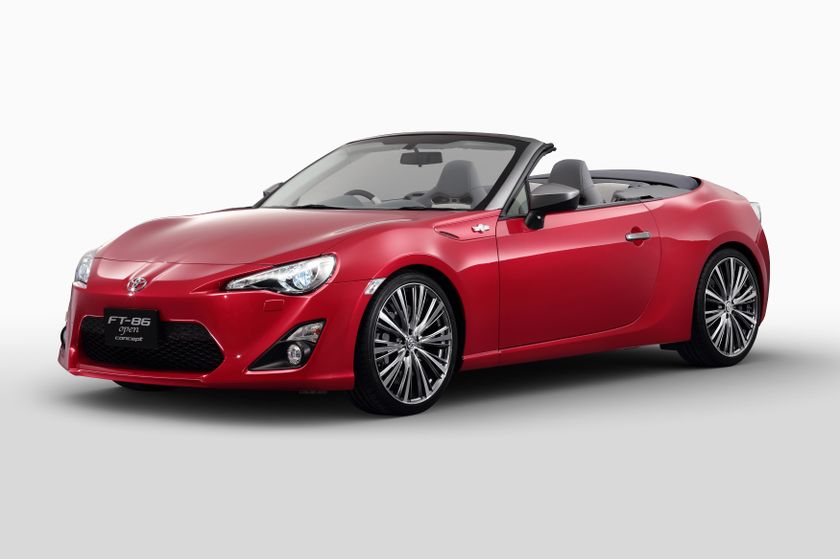 The FT-86 Open concept, based on the rear-wheel-drive "86"sports car, was created to explore future sports car variations.

With an electrically operated soft top, the vehicle adds that “open-top thrill” to the joy of driving and sense of oneness with the vehicle offered by the hard-top 86.A new “Flash Red” body color, used specifically for the Tokyo Motor Show, gives a twist to the iconic sports-car red.
- 30 -