Unique concept vehicle steered by driver’s intuitive body movements, and ability to react to its driver’s moods
Toronto, ON., (February 13, 2014) – This is a car that adopts a human-like interface – connecting both physically and emotionally with its driver – offering a mobility experience like nothing we have ever seen in today’s world.
It’s nothing less than the future of personal transportation, and it’s the featured attraction at the Toyota booth at this year’s Canadian International Auto Show (CIAS) in Toronto.
“The FV2 is a concept car that connects with people through the body and the heart,” said Seiji Ichii, President and CEO, Toyota Canada Inc. “It proposes a form of personal mobility that will serve a major role in Toyota’s vision for the future of mobility, designed for the digital generation of connected consumers.”
Using advanced design innovations, rather than using a steering wheel, the FV2 is operated by the driver’s body shifting forward and back, as well as to the left and right. And by using intelligent transport system technology, the car can connect with other vehicles in its immediate surrounding area, as well as traffic infrastructure by picking up and providing a wide variety of advanced safety information. 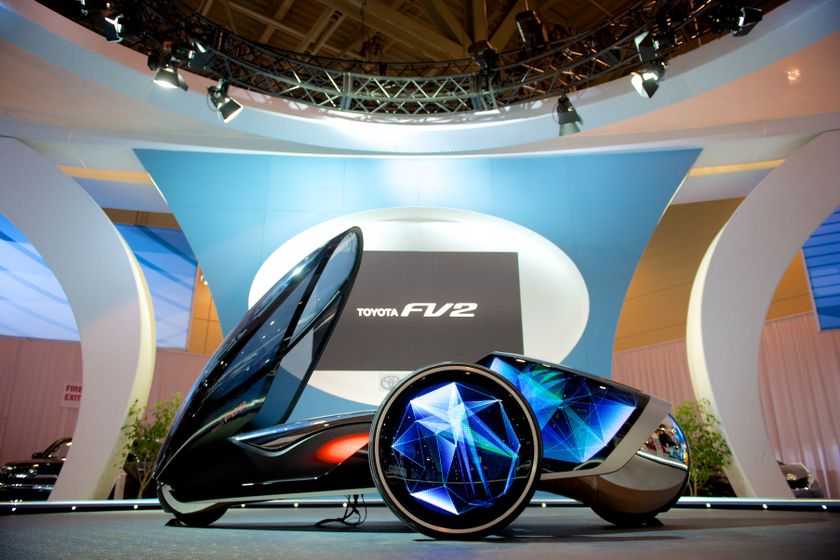 The FV2 embodies Toyota’s vision for an ever-developing driver-vehicle relationship by nurturing a bond between human and vehicle. Through an augmented reality display on the windshield, and by incorporating innovative Toyota technology, the FV2 and its driver are always in sync. Voice and image recognition technologies are used to determine the driver’s mood, and in response, the body colour and exterior display can be changed at will. Destinations can even be suggested based on accumulated driving history.
Toyota has created an exclusive smartphone application that enables users to experience the Toyota FV2 and can be downloaded free of charge from the AppStore or GooglePlay.
CIAS visitors can see the FV2 in the Toyota display area, which is located on the 800 Level of the South Building at the Metro Toronto Convention Centre (MTCC). The auto show runs February 14-23.
About Toyota Canada Inc.
Toyota Canada Inc. (TCI) is the exclusive Canadian distributor of Toyota, Lexus and Scion vehicles. Incorporated in 1964, Toyota has sold more than 4 million vehicles in Canada through a national network of 284 Toyota, Lexus and Scion dealerships. Toyota is dedicated to bringing safety, quality, dependability and reliability in the vehicles Canadians drive and the service they receive.  With a commitment to constant innovation, Toyota strives to stay ahead and anticipate the needs of consumers. TCI’s head office is located in Toronto, with regional offices in Vancouver, Calgary, Montreal and Halifax and parts distribution centres in Toronto and Vancouver. Toyota also operates two manufacturing facilities in Canada which build popular Canadian vehicles Toyota RAV4, Toyota Corolla, Toyota Matrix, Lexus RX and Toyota RAV4 EV.
-30-