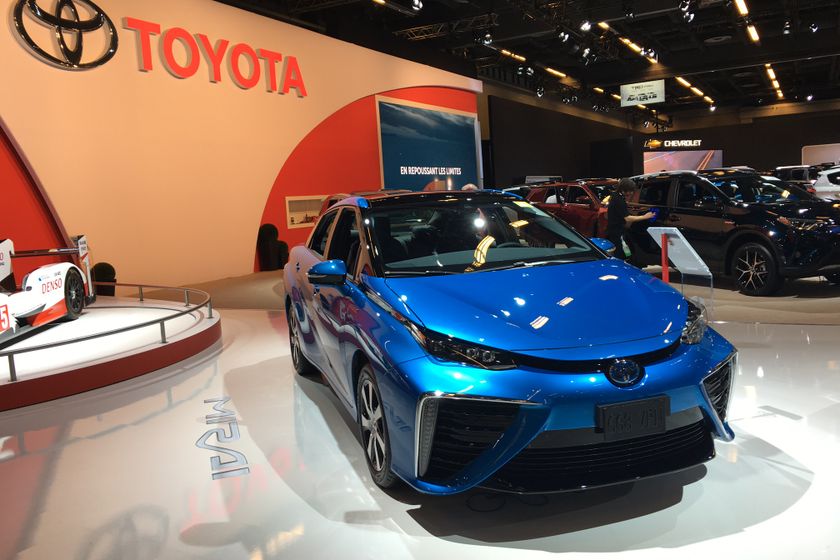 (MONTRÉAL, QC – JANUARY 20, 2017) The future of the automobile is cleaner than ever, thanks to vehicles like the 2016 Toyota Mirai sedan – a hydrogen-powered fuel cell electric vehicle (FCEV) that emits only water. And to help demonstrate this future to Canadians, Toyota is welcoming three Mirai FCEVs to Canada. These production models – already on sale in Japan, California, and parts of Europe – will be part of a cross-country awareness campaign. Starting this month at the Montréal International Auto Show, Canadians can learn about FCEVs and how they can help reduce greenhouse gasses.

“The hydrogen-powered Mirai joins Toyota’s broad range of advanced technology systems and vehicles – including hybrids that we build in Canada – to help reduce emissions under real world conditions while delivering everything that drivers desire in a car, SUV or light duty truck,” said Stephen Beatty, Vice President, Toyota Canada Inc. “We’re pleased to kick off the Mirai’s cross-Canada demonstration in Montréal this month, and look forward to sharing with drivers and stakeholders this hydrogen-powered approach to a cleaner future. Watch for the Mirai at auto shows and other events from coast to coast throughout 2017.”

The Toyota Mirai is part of the advanced technology vehicle display in the Toyota exhibit at the Montréal International Auto Show – January 20-29, 2017 at the Palais des congrès.

The Toyota Mirai is a real-world vehicle – already on sale where sufficient hydrogen refueling infrastructure exists. It’s a clean, efficient vehicle that’s fun to drive and easy for owners to adopt. It has a range of approximately 500km and takes only five minutes to refuel with hydrogen. Toyota’s decision to introduce the Mirai awareness campaign at the Montréal International Auto Show also highlights Mirai’s exceptional cold-weather performance, and Québec’s role as one of the world’s leading hydrogen producers. This ongoing Mirai awareness campaign will underscore the need for Canada to develop the infrastructure required to support FCEVs and other advanced technology vehicles that will help decarbonize the auto industry.

FCEVs are powerful and clean: The Mirai’s fuel cell mixes hydrogen with air, resulting in a chemical reaction that produces two things: electricity and water vapour. The electricity powers the vehicle, while the water vapour – the Mirai’s only byproduct – exits through the tailpipe.

To facilitate the widespread adoption of hybrid vehicles and support development of innovative fuel cell technologies around the world, Toyota has released more than 5,600 royalty free fuel cell-related patents, including critical technologies developed for the Toyota Mirai.

Stay tuned for more updates on Toyota’s Mirai awareness campaign as it continues throughout the year and beyond.

Toyota Canada Inc. (TCI) is the exclusive Canadian distributor of Toyota, Lexus and Scion vehicles.  Toyota has sold over 5 million vehicles in Canada through a national network of 286 Toyota, Lexus and Scion dealerships. Toyota is dedicated to bringing safety, quality, dependability and reliability in the vehicles Canadians drive and the service they receive. TCI’s head office is located in Toronto, with regional offices in Vancouver, Calgary, Montréal and Halifax and parts distribution centres in Toronto and Vancouver. Toyota operates two manufacturing facilities in Canada. Having produced more than six million vehicles, popular Canadian models built at these facilities include Toyota RAV4, Toyota Corolla, Lexus RX 350 and RX 450h hybrid.

Auto Shows, English, Toyota Models, Environment, Mirai
‹ back
Every effort has been made to ensure the product specifications, equipment, and content on this site are accurate based on information available at time of publishing. In some cases, certain changes in standard equipment or options may occur, which may not be reflected online. Toyota Canada reserves the rights to make these changes without notice or obligation.