A Powerful Alliance Between Hybrid Technology And RAV4 – The Original Compact SUV - Drives Toyota Forward In 2016 To Bolder, Better Places 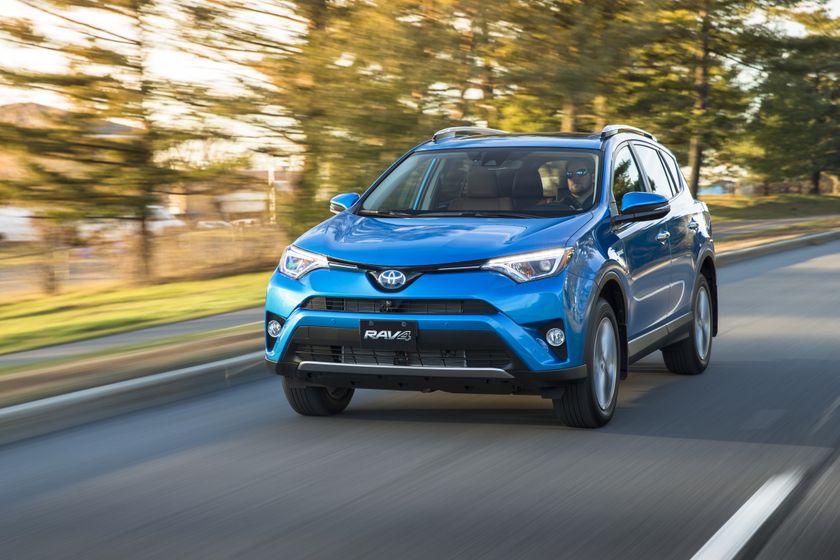 (TORONTO, ON – November 27, 2015) One of Canada’s most popular SUVs meets the world’s most proven advanced hybrid technology, as Toyota Canada launches the 2016 RAV4 Hybrid. This highly anticipated all-new model – the brand’s seventh hybrid vehicle features a winning combination of space, style, capability and performance plus remarkable fuel efficiency. And Toyota is celebrating its arrival by refreshing the entire RAV4 line-up with bolder body styling, upgraded cabin finishes, and a smoother, quieter ride – plus the return of a much-loved sporty RAV4 model with the introduction of the all-new RAV4 SE grade.

“With the joining of two pioneering concepts that changed the automotive landscape, we’ve created the ultimate RAV4 line-up,” said Larry Hutchinson, Vice President of Toyota Canada Inc.    “By delivering on our promise of exceptional fuel efficiency, performance and design, we’re shifting people’s perceptions about hybrid cars and proving they really can have it all when purchasing a vehicle."

The RAV4 is the Toyota brand’s 2nd highest selling vehicle and no matter which of the eight models available Canadians choose, ultimately, the RAV4 will bring forth a playful spirit from its drivers.  With its fun-to-drive versatility, ample cargo space and endless features, the RAV4 is the perfect choice for anyone that wants to get out there and go.

The all-new RAV4 Hybrid is built around a Toyota Hybrid Synergy Drive that’s been uniquely optimized for this compact SUV, with a 2.5L four cylinder Atkinson cycle engine, high-torque electric motors and continuously variable transmission. This combination delivers best-in-class City and Combined fuel efficiency of 6.9 and 7.2 litres per 100 kilometers, respectively.

An all-wheel-drive configuration with intelligence (AWD-i) joins numerous other Toyota handling technologies to maximize driving confidence in any road and weather conditions.

The RAV4 Hybrid XLE (Starting MSRP: $34, 465) is generously equipped with comfort, convenience and style features.  From its six-speaker Display Audio System with 6.1-inch screen, to a host of sophisticated safety and convenience-focused features like SIRI Eyes-Free and voice recognition, everything you need is right there.

Comfort features include dual zone automatic climate control, an eight-way power-adjustable driver’s seat and heated front seats, while the 60/40 split fold-down rear seats make it easy to optimize the RAV4 for up to five adults or loads of cargo.  Intuitive operation is top of mind in the driver-focused cockpit and numerous safety systems, including unique offerings like Vehicle Proximity Notification and Rear Cross Traffic Alert Systems, plus no less than 8 airbags ensure safety on the road.

All RAV4’s have received numerous enhancements for 2016, but its introduction of the all-new sporty SE that’s got long-time enthusiasts ready to get out there and play.

Toyota engineers have tuned the RAV4 to deliver a smoother, quieter ride and added Hill-start Assist Control to all models. Meanwhile, designers have upgraded the styling, inside and out, with a more aggressive face, redesigned front and rear bumpers, all-new wheel designs for all model grades, and a shark fin-style antenna, standard on all models. The RAV4’s new look is complemented with a fresh choice of colour schemes, including the very bold Electric Storm Blue.  New materials and components also give the cabin a more premium feel while visors with extenders and integrated overhead storage for sunglasses make driving more enjoyable on bright sunny days.

Either model may be enhanced with an available Upgrade Package, which adds a 6.1-inch Display Audio system with six speakers, a back-up camera, silver painted roof rails, and more.

For complete and up-to-date details and specifications, visit www.toyota.ca/rav4. The 2016 Toyota RAV4 and RAV4 Hybrid will be on sale in January 2016 at Toyota Dealers across Canada.