B.C. Firefighter Gets Back On The Road With Help From Penticton Toyota after Pickup Truck Stolen 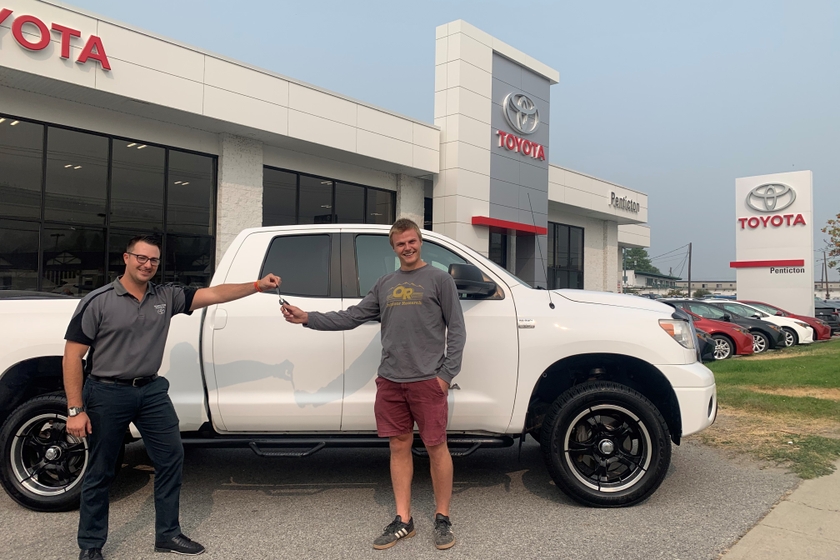 Toronto, September 16, 2020 – There are good people in the world, like Connor Callaghan – a student at UBC Okanagan who spent the summer fighting forest fires as a member of the B.C. Wildfire Service. Since members of the service are highly mobile, Callaghan camped out of his 2003 Toyota Tundra full-size pickup truck while battling blazes.

And then there are people who aren’t so kind, like the person who stole Callaghan’s Tundra out of a parking lot where all the fire crews left their vehicles while tackling the Christie Mountain Fire near Penticton at the end of August. The stolen truck was located a few days later, however it had been heavily damaged and the Insurance Corporation of British Columbia declared it a write-off.

“For 17 years my father and I worked on this truck together,” said Callaghan. “It was more than just a means of transport, it was filled with memories for me and my family. “ And from a practical perspective, in addition to losing the truck Callaghan lost everything he had planned to take when he returned to university – including clothes, his computer, an iPad, and a bike rack.

Larry Jr. Pidperyhora, general manager at Penticton Toyota was following Connor’s story and the series of events was just not right. “Wow – here is someone who is risking his life to save people’s homes and property, and while he’s doing that somebody takes and destroys his belongings,” said Pidperyhora.

The team members at Penticton Toyota decided they could do something about that. While they could not replace Callaghan’s truck, they did the next best thing: The dealer located and refurbished a previously owned Tundra and handed Callaghan the keys on September 16th.  The replacement vehicle – a 2010 Toyota Tundra SR5 4.6L 4x4 Double Cab model – will help Callaghan continue to fight fires and get back to school this fall.

Pidperyhora appreciated the sentimental value that the lost truck held for Callaghan and hopes the new one will play a similarly important role in Callaghan’s life. “Toyota owners have an affinity for their trucks,” Pidperyhora noted. “Time spent with their trucks creates memories that last a lifetime and with this truck, we hope we can help Connor write a new chapter about life with a Tundra.”