Sébastien Buemi, Kazuki Nakajima and Fernando Alonso, in the #8 TS050 HYBRID, defended their Le Mans crown and secured the drivers’ World Championship in the process, winning by 16.9secs from team-mates Mike Conway, Kamui Kobayashi and José María López in the #7.

But those bare facts do not reflect the true drama of the closing stages, which denied the #7 what seemed a certain victory in front of 252,500 spectators.

On the 367th lap, with a lead of over two minutes, data on the #7 car indicated a puncture and José pitted to replace the tire. A sensor issue resulted in the wrong tire being identified, meaning José left the pits still with a deflating tire. That necessitated a slow lap back to the pits when all four tires were changed, handing an unassailable lead to Kazuki in the #8.

The #7 crew had controlled much of the contest, having set the fastest-ever Le Mans race lap of 3mins 17.297secs. Other motorsport records were rewritten too; Kazuki became the first circuit-racing World Champion from Japan and Fernando is the second driver to win four-wheel world titles in two different disciplines, having previously been crowned Formula 1 champion.

The #7 car had started the race from pole position following Kamui’s fastest qualifying lap, with the #8 starting just behind. That set the scene for an exciting and close battle for overall victory between the two 1,000PS TS050 HYBRIDs, with momentum swinging one way and then the other.

After 12 hours the two TOYOTAs were separated by only 8.6secs. In the night, the #7 seized a decisive advantage as the sister car faced an aerodynamic imbalance. That was caused by bodywork damage due to the rigours of a tough, flat-out contest although the cars were always on the same lap.

As the final hours approached, the gap remained relatively stable around two minutes and the focus switched to bringing the cars home safely. All appeared to be going to plan until the #7 experienced its dramas and Kazuki took the lead with less than an hour to go.

Shigeki Tomoyama, GAZOO Racing Company President: “I would like to truly thank all fans, supporting companies and all team members who fought with one heart. In order to win Le Mans, a fast car alone is not enough. We also need a strong car and team. We wanted to improve on the victory last year; we made a continuous effort to improve everything and I believe this was clear in this year’s victory. I was really impressed with the podium celebration when you see the many TOYOTA GAZOO Racing flags and two Japanese flags flying in the air. I am very happy to create a new page in the history of Le Mans. But we cannot be fully happy if we consider the trouble which occurred on car #7, which lead most of the race, in the last hour. A slow puncture was accompanied by sensor trouble and this lost a lot of time. We can feel there is still room to improve in the car and team operation. For Le Mans in 2020, and for the hypercar class from autumn 2020, TOYOTA GAZOO Racing will continue to make a strong today, and even more tomorrow, always creating better sprit. The continued support of the fans is really appreciated.”

Hisatake Murata, Team President: “We have an unusual feeling because we have won our second Le Mans but everyone in the team is sorry for Mike, Kamui and José and the #7 crew, who would have been deserving winners. We will investigate the exact cause of this issue in the coming days to avoid a repeat. Nevertheless, I am proud of the overall performance as well as the team spirit which we showed throughout the race, also in the difficult moments in the final hour. Congratulations to the new World Champions Sébastien, Kazuki and Fernando, also on their second Le Mans victory. This was a dramatic end to an incredible season for TOYOTA GAZOO Racing and we look forward to defending our titles next season.”

Mike Conway (TS050 HYBRID #7): “It’s a tough outcome because we were looking good for a long, long time but we just got unlucky with the puncture. That’s Le Mans. Everyone on the team did a great job, especially the car crew. All credit to them for giving us a car that ran at the front all day. Congratulations to car #8 not just today but also for winning the World Championship. They have been formidable opponents, but it has been a lot of fun. We will be pushing to come back stronger.”

Kamui Kobayashi (TS050 HYBRID #7): “To win Le Mans is extremely difficult and frustrating; we saw that again. I have tried four times, so maybe next year will be mine. The point is that we should never give up; we should continue to push and try our best. This year I pushed really hard to win and it looked good until 23 hours, so this result is hard to take. Congratulations to car #8 and everyone who got to the end of the race; it is not easy to finish a 24-hour race so well done to everyone.”

José María López (TS050 HYBRID #7): “Firstly I would like to congratulate our team-mates from car #8 who pushed us to the limit for the Le Mans win and the World Championship title. The history of Le Mans has proven that it is a tough and cruel race; unfortunately, we had to experience this today. Nevertheless, I am proud of my team-mates Mike and Kamui for their performance, they drove a great race and we can promise that we will come back stronger to Le Mans.”

Sébastien Buemi (TS050 HYBRID #8): “It was a difficult race for us because we knew that it was possible to lose the World Championship. When we started the race we wanted to stay on the pace of car #7 but after only five laps I realised this was nearly impossible. We got stronger during the race but admittedly car #7 was quicker in the end. I would have been satisfied to finish the race in second so what happened to car #7 is really painful. I am really sorry for them, they did an amazing job.”

Kazuki Nakajima (TS050 HYBRID #8): “This year the Le Mans win was decided by luck and not by performance. It was a tough race and what happened to car #7 is hard to believe. We experienced a similar situation in 2016 so we know how this feels and we feel for our team-mates. Thanks to our win we are also World Champions and we are very proud of this after a long and hard season, which included many close fights with our sister car.”

Fernando Alonso (TS050 HYBRID #8): “It is amazing to win Le Mans for the second time, but the win came really unexpectedly. We did not have the pace to win this race against car #7 on track. Today luck was a big factor, and this is part of motorsport. I feel for my team-mates who are actually more than team-mates, they are friends. They would have deserved the victory, but the race chose us to win it. Our main goal was to win the World Championship and we are very proud that we have achieved this.” 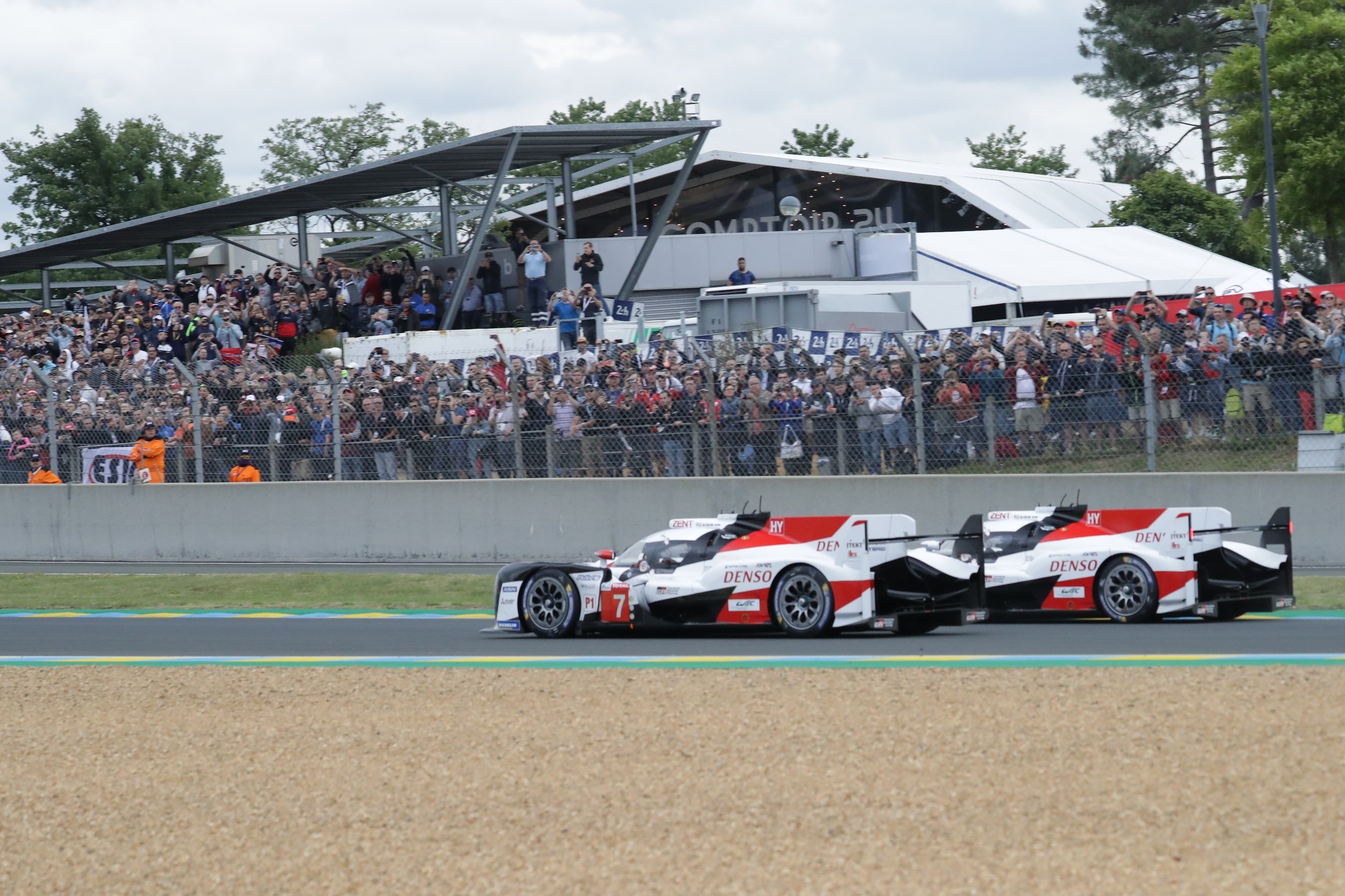