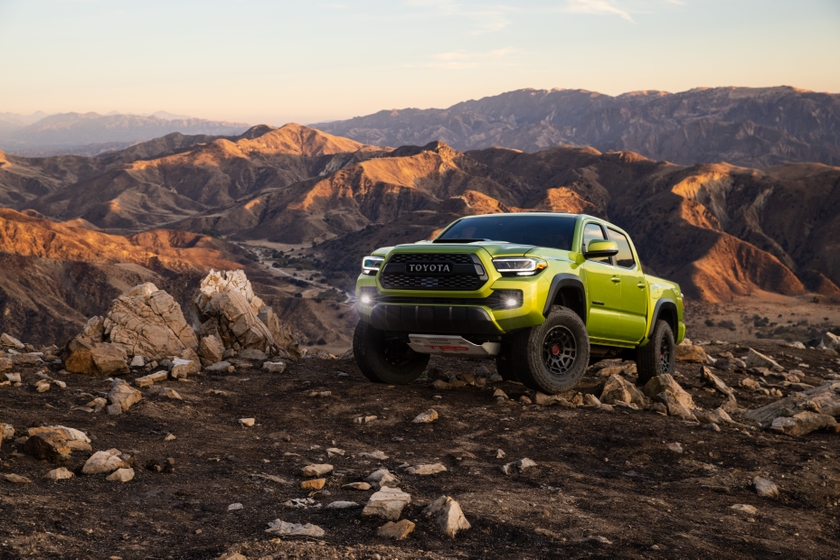 TORONTO, Ontario – June 2, 2021 – When it comes to true off-road performance, taking the trail less traveled isn’t suited for amateurs. That’s where TRD Pro comes in. From the beginning, TRD Pro vehicles were designed to take off-road performance to the next level using parts designed and tested by the Toyota Racing Development team. The Tacoma TRD Pro is taking the next step in its evolution.

The increased suspension lift will provide adventurers with even more off-road capability for exploring the great outdoors, as it equates to real-world improvements for trail and obstacle clearance thanks to its 36.4-degree approach angle, 24.7-degree departure angle, and its 26.6-degree breakover angle – all of which improve upon the previous-generation TRD Pro.

Complementing the increased front lift is new TRD-engineered upper control arms. Featuring machine-forged aluminum construction for added strength, the new TRD upper control arms allow the FOX shocks to make use of the additional rebound stroke afforded by the lift by adjusting the angle of the ball-joint mount.

The new Tacoma TRD Pro gets plenty of hardware to help enhance performance, but in the looks department it gets some significant changes as well. For starters, the new exclusive TRD Pro colour, Electric Lime Metallic, is added to the mix of Super White, Magnetic Gray Metallic and Midnight Black Metallic for the 2022 model year.

Arguably the most eye-catching change is the new TRD Pro stamping on the rear quarter panel of the truck that provides a little more breathing room between “TRD” and “Pro.” Badging is updated from the previous model year, as the TRD pro door badge is removed and a “Tacoma” badge is added to the front door. All badges will still be finished in black.

The instrument panel integrates a 4.2-inch colour Multi-Information Display with an inclinometer and tilt gauge, plus displays for outside temperature, odometer, trip meters, and fuel economy estimate averages.