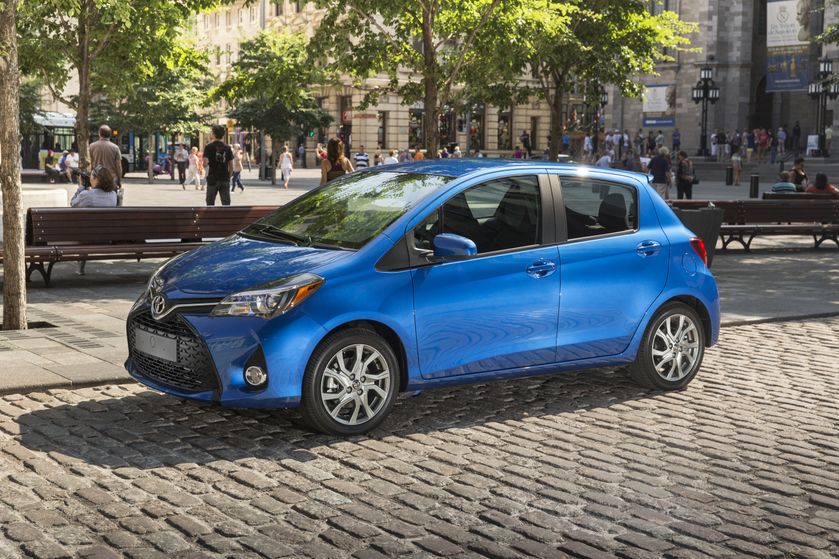 (MONTREAL, QC – August 13, 2014) Driving fun looks better than ever, with new style and attractive pricing on the extremely well-equipped 2015 Toyota Yaris. Designed, developed, engineered and built in France, the 2015 Yaris combines eye-catching curb appeal; a high-quality, comfortable and spacious cabin; improved handling for a more nimble driving experience; and a long list of standard features. Add it up, and the 2015 Yaris is the standout subcompact.

“Toyota has taken the best of the Yaris and made it even better for 2015. We’ve added more content across the board, including to the sporty Yaris SE and the popular Yaris LE,” noted Larry Hutchinson, Vice President of Toyota Canada Inc. “The Yaris is the small car that’s big on value – and for 2015, we’ve made styling enhancements inside and out plus performance tweaks, then added even more features as standard. With the 2015 Yaris, Toyota delivers even more value for those shopping for a subcompact.”

The 2015 Toyota Yaris is available in three models:

For 2015, the Toyota Yaris features a striking exterior style with new front bumper for a stronger, more dynamic appearance. At the rear, the bumper and taillights have been revised to convey a broader, lower stance. Each model – CE, LE and SE – is identified by its own unique styling cues and is offered in a range of colours, including new colours for 2015: Blue Streak Metallic and Brown Sugar Metallic.

Inside, the 2015 Yaris features a new design that emphasizes the roominess and dynamism of a cabin with space for five adults. The upper instrument panel is now thinner and the door panels have a more fluid appearance. The interior features numerous materials upgrades that go beyond what you expect in a subcompact – including more tactile soft-touch surfaces, satin chrome trim and new seat fabrics.

Hit the road and discover even better handling in the car that’s always been fun to drive. For 2015, the Toyota Yaris features a more rigid body structure, improved steering feel and upgraded suspension systems for a more comfortable ride and better control. Aerodynamic performance has been tweaked and other improvements made to further minimize this subcompact’s already impressive noise and vibration performance.

Every 2015 Yaris is powered by Toyota’s 106 peak horsepower 1.5L four-cylinder engine. This proven engine delivers plenty of acceleration and is offered with a choice of five-speed manual or four-speed automatic Super ECT transmission with overdrive to maximize fuel efficiency.

For full information on features and specifications, visit www.toyota.ca/yaris.

Toyota Canada Inc. (TCI) is the exclusive Canadian distributor of Toyota, Lexus and Scion vehicles.  Incorporated in 1964, Toyota has sold more than 4 million vehicles in Canada through a national network of 285 Toyota, Lexus and Scion dealerships.  Toyota is dedicated to bringing safety, quality, dependability and reliability in the vehicles Canadians drive and the service they receive.  TCI’s head office is located in Toronto, with regional offices in Vancouver, Calgary, Montreal and Halifax and parts distribution centres in Toronto and Vancouver.  Toyota operates two manufacturing facilities in Canada which build popular Canadian vehicles Toyota RAV4, Toyota Corolla, Toyota Matrix, Lexus RX 350 and RX 450h hybrid.  Toyota Motor Manufacturing Cambridge (TMMC) also manufactures the Toyota RAV4 EV for the North American market.  TMMC is the only Toyota manufacturer in North America to assemble both hybrid and electric vehicles.