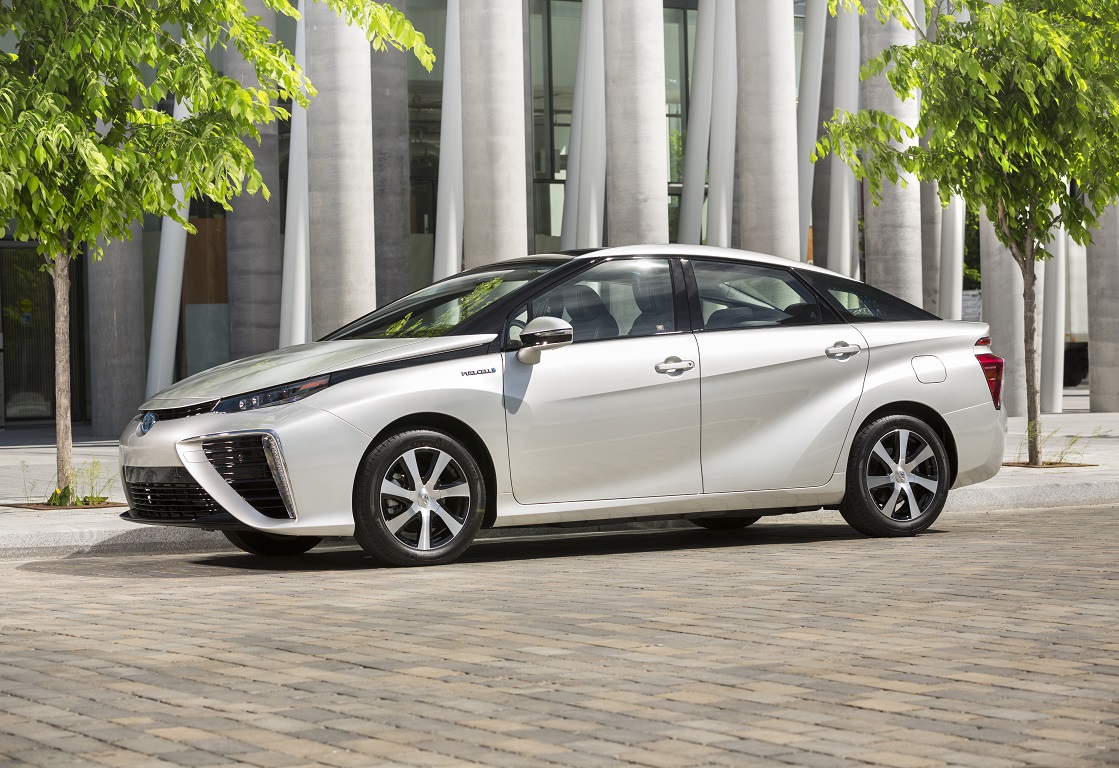 (MONTREAL, QC – June 16, 2016) This month, as part of continued efforts to expand the conversation on the diversity of electric powertrains, Toyota Canada is bringing three iterations of electric vehicles – the future of sustainable mobility – together at EVS29, the largest international electric vehicle conference in the world.  Leading the pack is the 2016 Toyota Mirai Hydrogen Fuel-Cell Electric Vehicle (FCEV).    Alongside the Mirai will be the new 2017 Prius Prime Plug-In, Toyota’s most technologically advanced hybrid vehicle and the 100% electric personal mobility vehicle, the i-Road, all shining a light on viable, “real-world ready” alternatives to conventional, internal combustion vehicles.

“Toyota has invested considerable engineering talent and other resources into developing vehicles that take advantage of state-of-the-art technology while also giving drivers compelling reasons to embrace them,” said Stephen Beatty, Vice President, Toyota Canada Inc. “We’re deeply committed to this – and are constantly looking at the big picture – which we refer to as ‘right vehicle, right place, right time’.  This long-term thinking is embedded in Toyota’s DNA.”

Toyota’s commitment to helping societies reduce their dependency on fossil fuels is all part of the company’s long-term global 2050 Environmental Action Plan, which includes the New Vehicle Zero Emissions Challenge, aiming to reduce CO2 emissions by 90 per cent compared to 2010 levels, plus five other climate change and natural resource recycling initiatives.  So deep is Toyota’s intent to facilitate widespread adoption of hybrid vehicles and support development of innovative fuel cell technologies around the world, that in January 2015, the company ‘walked the walk’ by releasing more than 5,600 royalty free fuel cell-related patents, including critical technologies developed for the Toyota Mirai.  With high level sponsorship in two key Montreal events - EVS29 and the exclusive 2030 Energy Policy: The Place of Hydrogen in Quebec forum leading up to the symposium, it’s clear Toyota also talks the talk – and has a lot to say.

A leading role for Quebec

EVS29 in Montreal is the perfect venue for the Mirai to make its official Canadian debut as a true symbol of transformation for the auto industry.  The province of Quebec already boasts an abundant supply of clean electricity and water, setting the stage for Quebec to be a global leader in the production of green hydrogen.

And, in the ongoing spirit of collaboration, John-Paul Farag, one of Toyota’s Advanced Technology & Powertrain experts will represent the automotive manufacturer point of view as a key panelist at the 2030 Energy Policy event - a conversational exploration of hydrogen in Quebec.  Hosted by the Université du Québec à Trois-Rivières’ Hydrogen Research Institute, the event brings together an esteemed group of hydrogen industry representatives, government officials, suppliers, infrastructure and production representatives, researchers, subject matter experts and more.

From hybrids, to fuel cells

Toyota led a shift in thinking in 1997 with the successful introduction of the world’s first mass-produced gasoline-electric hybrid vehicle, the Prius.  Debunking myths, engaging with stakeholders and perhaps most importantly, showcasing that driving fun, versatility and other consumer demands would be met without compromise with hybrid vehicles were all important drivers of hybrid vehicle adoption.  As a result, Toyota’s name is now synonymous with hybrid technology – with the most proven and popular hybrid powertrain on the planet, built into more than nine million vehicles over the past two decades worldwide.  With the Fuel Cell Electric Vehicle (FCEV) Mirai and a hydrogen economy within reach, Toyota is perfectly positioned to lead the next revolution, and the impressive display of vehicles in Montreal this week are tangible proof of Toyota’s deep understanding that successfully decarbonising transportation will require a broad range of technologies.  One size simply does not fit all when it comes to vehicle electrification.

Toyota Mirai:  A Turning Point for Mobility and the Environment

The 2016 Toyota Mirai delivers 151 peak horsepower and up to 247 lb-ft of torque, with a range of approximately 480 km and a refilling time of about five minutes. The Mirai’s fuel tank stores hydrogen, which mixes with air resulting in a chemical reaction that produces two things; electricity and water. Electricity powers the vehicle, while the water – Mirai’s only emission - leaves through the tailpipe.

The Toyota i-Road is an ultra-compact electric vehicle that has already undergone real-world tests in Japan, and France, representing a new style of urban mobility that includes car-sharing pilot projects.   Designed as a personal mobility vehicle to compliment public transportation in an environmentally friendly way, the three-wheeled, one- or two-person i-Road combines the convenience of a motorcycle with the comfort and stability of a car.  With a maximum speed of 60 km/h and a cruising range of 50 km, it’s optimized for short-distance travel within urban areas and a whole lot of fun!

For the first time in Canada, Toyota will also display the 2017 Toyota Prius Prime – an ultra-efficient Prius featuring a Plug-In Hybrid powertrain and truly, the ultimate vehicle for Canadian consumers.  The Prius Prime targets a remarkable fuel efficiency of 1.96 Liters equivalent per 100 kilometers. This is a 22 per cent reduction in fuel consumption compared to the previous generation of Prius Plug-In, and gives the Prius Prime an estimated range of more than 965 km on a single tank of gas.  Beyond its remarkable fuel efficiency and even better electric-only range, the Prius Prime delivers electrifying design, driving fun, a premium cabin loaded with advanced features and technologies, and more. The 2017 Toyota Prius Prime arrives at Toyota dealers across Canada this fall.

For complete and up-to-date details and specifications on these and other advanced technology vehicles – including Toyota’s extensive line-up of hybrid cars and hybrid SUVs – visit www.toyota.ca

(*Specs are based on the Mirai currently available in California)

Toyota Canada Inc. (TCI) is the exclusive Canadian distributor of Toyota, Lexus and Scion vehicles.  Toyota has sold over 5 million vehicles in Canada through a national network of 286 Toyota, Lexus and Scion dealerships.  Toyota is dedicated to bringing safety, quality, dependability and reliability in the vehicles Canadians drive and the service they receive.  TCI’s head office is located in Toronto, with regional offices in Vancouver, Calgary, Montreal and Halifax and parts distribution centres in Toronto and Vancouver.  Toyota operates two manufacturing facilities in Canada. Having produced more than six million vehicles, popular Canadian models built at these facilities include Toyota RAV4, Toyota Corolla, Lexus RX 350 and RX 450h hybrid.