The future is beautiful – and it begins with the all-new, second generation, zero-emission Toyota Mirai, on sale in Canada this Spring 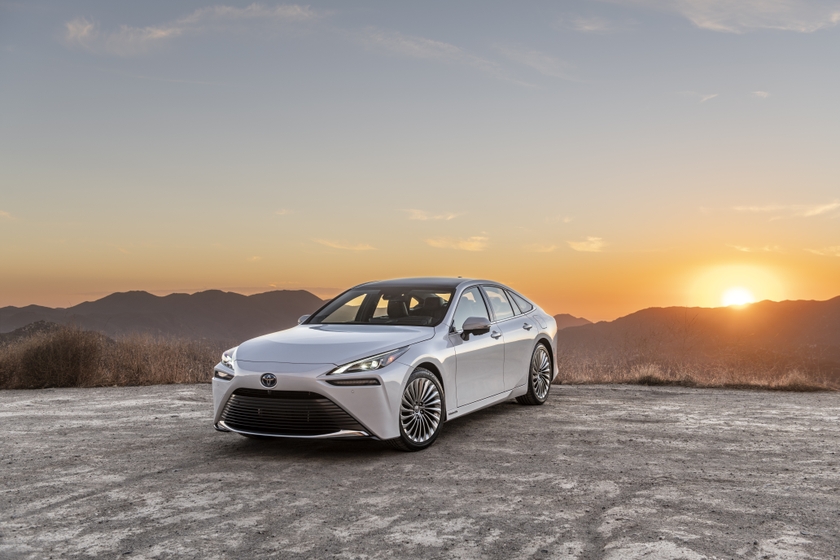 TORONTO, ON – March 3rd, 2022 – The future will arrive in Canada this Spring when the second-generation Toyota Mirai fuel cell electric sedan goes on sale in Canada.

“The Toyota Mirai changes everything about personal mobility – offering drivers an advanced powertrain that produces zero emissions and is as fast as gas to refuel,” said Cyril Dimitris, Vice President, Toyota Canada Inc. “But above all, the new Toyota Mirai is a vehicle that drivers will choose because it’s a gorgeous sedan that’s fun to drive – and that just happens to be a fuel cell electric.”

Toyota has completely reimagined the Mirai for 2022. First introduced in 2015, the new Mirai has evolved into a premium sedan with featuring cutting-edge design, technology, and driving performance.

For 2022, Toyota engineers completely redesigned the Mirai’s powertrain. Most noticeably, they replaced the front-wheel-drive configuration of 2015 with Toyota’s GA-L premium rear-wheel-drive platform with Front and Rear multilink suspension. The new Mirai features an improved Front:Rear weight distribution at nearly 50:50 and a lower centre of gravity. This, plus a rigid platform employing laser screw welding and adhesive structure bonding, significantly enhances handling and agility.

Engineers also made significant improvements to the fuel-cell electric system that’s at the heart of the Mirai – including performance enhancements and increased hydrogen storage capacity. The result is a more powerful and engaging driving experience, plus a 30 percent boost to range – now estimated up to 647 km on a full tank, on the XLE grade.

Under the hood, the Mirai performs essentially as an electric vehicle – but one that never needs to be plugged in to recharge. The fuel cell stack – in development since Toyota introduced the first Prius more than two decades ago – is safe and proven. It combines compressed hydrogen gas from the Mirai’s tank with oxygen from the atmosphere. The resulting chemical reaction produces the electricity to power the Mirai. The only by-product is water vapour, which is eliminated through a vent pipe beneath the vehicle. Best of all, the Mirai can be refueled in about five minutes.

While engineers worked on improving performance, handling, and efficiency, Toyota designers styled a suitably advanced sedan to match. The new Mirai is a mid-size luxury sedan with a bold stance, accentuated by 19” or 20” wheels. Its coupe-inspired body is dramatic yet refined, conveying a sense of motion with a long hood, sweeping roofline, and short rear deck. More than just beautiful styling, the body also achieves an impressive 0.29 coefficient of drag, aided by a number of bumper-to-bumper aerodynamic details. Body colour choices include Oxygen White, Heavy Metal, Black, Supersonic Red, and Hydro Blue. All come with colour-keyed, heated, and power-folding outside mirrors with integrated turn signal indicators, defrosters, and blind spot warnings.

The new Mirai introduces a new lighting signature for a Toyota sedan – as long, narrow headlights sweep rearward into the fenders. All Mirai models now feature auto-levelling bi-beam LED headlights, daytime running lights, and clearance lights. The LED side marker lamps are etched with the Mirai logo. A thin LED taillight panel spans the car’s width and is tapered in the centre. This creates a unique signature after dark, with three distinct gradation lines.

Inside, the Mirai offers driver and passengers a quieter cabin environment and improved passenger comfort. What’s more, there’s more space for all occupants, even as the seating allocation increases from four to five adults.

Exacting craftsmanship and high tech give the Mirai comfort that’s above the ordinary. The headliner, for example, integrates a reflective layer on the roof-facing surface to block the infrared portion of the light spectrum. This not only reduces heat build-up inside the cabin but also reduces the electrical load on the air conditioning system. The side windows are UV-protected and water-repellent.

Drivers will welcome a design that puts all gauges within easy sight, and all controls in easy reach. All models feature both an 8” colour LCD digital gauge cluster and a 12.3” touchscreen multimedia display. The 8” gauge includes an ECO drive indicator that helps the driver to maximize fuel efficiency by providing acceleration guidance and assigning a score on economical driving. Hydrogen fuel level and remaining range are always shown. The 12.3” display provides easy access for the driver or front passenger, and the multimedia, climate control, and navigation content can be toggled from left and right.

Toyota Canada offers the Mirai in two configurations, as follows:

The all-new 2022 Toyota Mirai goes this Spring at Toyota Dealers in Canadian markets where refuelling infrastructure exists – including select regions of Quebec and British Columbia. Sales will expand into additional markets as refuelling facilities are established. For complete and up to date details and specifications, visit https://www.toyota.ca/toyota/en/vehicles/mirai/overview