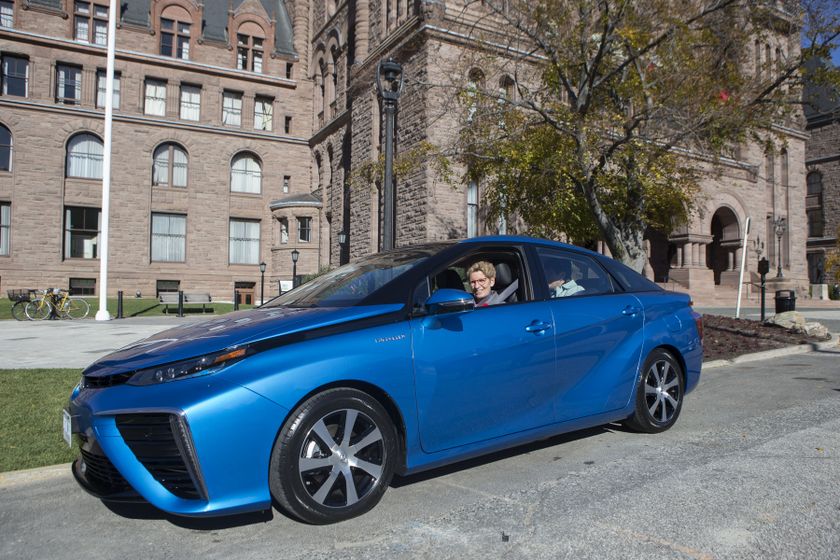 TEST DRIVING A CLEANER FUTURE: Ontario Premier Kathleen Wynne takes a Toyota Mirai for a spin around Queen’s Park in Toronto. The Mirai, Toyota’s first mass-produced hydrogen fuel cell electric sedan, is a clean energy vehicle that uses no gasoline and produces only water vapour as a byproduct.

To facilitate the widespread adoption of hybrid vehicles and support the development of innovative fuel cell technologies around the world, Toyota has released more than 5,600 royalty free fuel cell-related patents, including critical technologies developed for the Toyota Mirai.

The Toyota Mirai is a clean, efficient vehicle that’s fun to drive and easy for owners to adopt. It has a range of approximately 500km and takes only five minutes to refuel with hydrogen. The Mirai’s fuel cell mixes hydrogen with air, resulting in a chemical reaction that produces two things: electricity and water vapour. The electricity powers the vehicle, while the water vapour – the Mirai’s only byproduct – exits through the tailpipe.

For complete and up-to-date details and specifications for the Toyota Mirai and other advanced technology vehicles – including Toyota’s extensive line-up of hybrid cars and hybrid SUVs – visit www.toyota.ca

About Toyota Canada Inc.
Toyota Canada Inc. (TCI) is the exclusive Canadian distributor of Toyota, Lexus and Scion vehicles.  Toyota has sold over 5 million vehicles in Canada through a national network of 286 Toyota, Lexus and Scion dealerships.  Toyota is dedicated to bringing safety, quality, dependability and reliability in the vehicles Canadians drive and the service they receive.  TCI’s head office is located in Toronto, with regional offices in Vancouver, Calgary, Montreal and Halifax and parts distribution centres in Toronto and Vancouver.  Toyota operates two manufacturing facilities in Canada. Having produced more than six million vehicles, popular Canadian models built at these facilities include Toyota RAV4, Toyota Corolla, Lexus RX 350 and RX 450h hybrid.