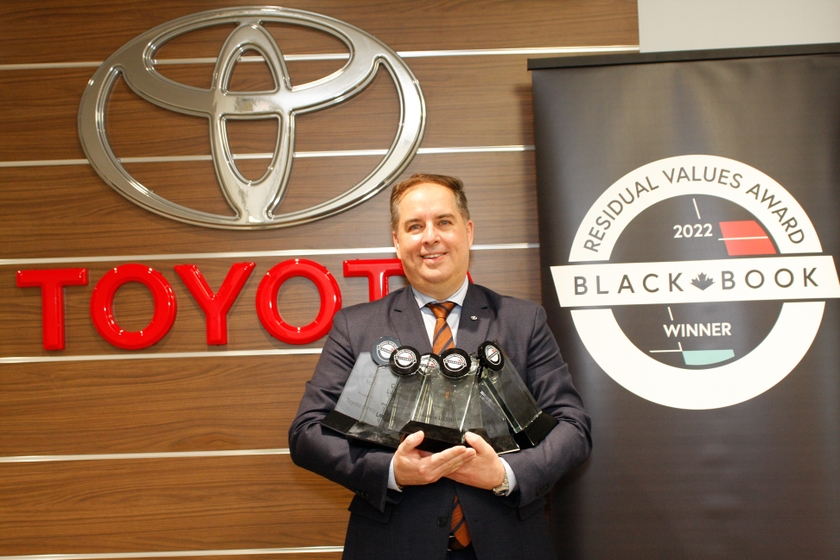 TORONTO, Ontario – April 18, 2022 – Toyota Canada has been recognized by Canadian Black Book (CBB) with seven Best Residual Value Awards in 2022. This is the first time CBB has recognized winners of ‘Best Residual Value’, not to be confused with their ‘Best Retained Value’ awards announced earlier in the year. For these inaugural awards, Toyota posted seven winsincluding the Overall Brand Award in the Luxury category for Lexus and the Overall Brand Award in the Car category for Toyota.

The 2022 Best Residual Value Awards measure vehicles values into the future. These awards recognize which vehicles are expected to hold the largest percentage of their MSRP 48 months after the original date of purchase. These awards are presented in 21 categories of cars, trucks, SUVs and EVs.

“We are thankful to our loyal customers for their continued trust and confidence in our vehicles and our brands,” says Cyril Dimitris, Vice-President of Sales and Marketing at Toyota Canada Inc. Toyota Canada. “Our focus continues to be on providing quality products and enhancing our customer experience every year, and we are honoured to be recognized by Canadian Black Book for our efforts.”

Toyota and Lexus were recognized with the following awards:

Toyota Canada Inc. (TCI) is the exclusive Canadian distributor of Toyota and Lexus vehicles. Toyota has sold over six million vehicles in Canada through a national network of 288 Toyota and Lexus dealerships. Toyota is dedicated to bringing safety, quality, dependability and reliability to the vehicles Canadians drive and the service they receive. TCI’s head office is in Toronto, with regional offices in Vancouver, Calgary, Montreal and Halifax, and parts distribution centres in Clarington and Vancouver. Toyota also operates two manufacturing facilities in Canada. Having produced more than nine million vehicles, popular Canadian models built at these facilities include the Toyota RAV4, Toyota RAV4 Hybrid, the Lexus RX and RX hybrid, and the Lexus NX and NH hybrid. Recent investments at its facilities in Ontario will allow for increased production of these top-selling models for the North American market.