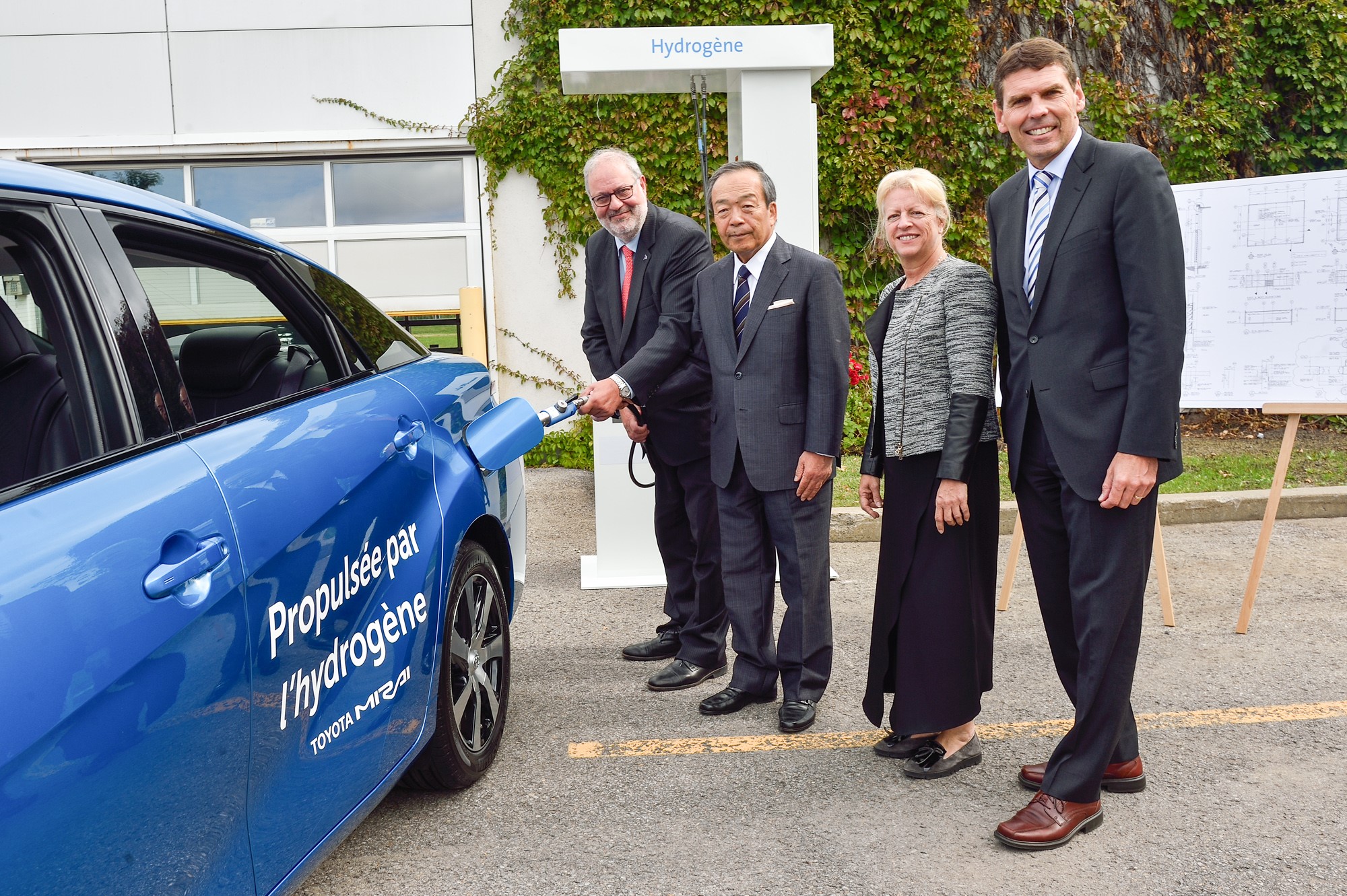 (BROSSARD, QUÉBEC – September 9, 2017) Toyota and the Québec Government share a common goal - to reduce the carbon emissions of vehicles driven by Québec drivers - and they are collaborating to make this a reality. During a meeting with Energy Minister Pierre Arcand today, the Chairman of Toyota Motor Corporation, Takeshi Uchiyamada, shared how Toyota plans to work closely with the Québec government to achieve this goal.

“It’s been a productive meeting with Toyota. I’m pleased to see that they are interested in initiatives in line with our 2030 Energy Policy, which puts consumers at the forefront of our action,” said Energy Minister Pierre Arcand. “By collaborating with the Government of Québec and Transition énergétique Québec (TEQ), Toyota will help us to support, encourage and promote energy transition, innovation and efficiency and to reach our target for reducing the amount of petroleum products consumed.”

At an event in Brossard today, Chairman Uchiyamada announced that Toyota Canada’s first hydrogen fueling and service facility will be built at its Québec zone office as a first step in the development of hydrogen fueling infrastructure in the province.

“Toyota and the Province of Québec have both been leaders in the reduction of carbon emissions,” said Uchiyamada, also known as the ‘father of the Prius’. “We continue to work closely with the Québec government to help them build the infrastructure required to make adoption of greenhouse-gas-friendly technology a reality.”

Both Toyota and the Québec government are dedicated to continue providing solutions for carbon emissions reduction in the province.

Toyota Canada Inc. (TCI) is the exclusive Canadian distributor of Toyota and Lexus vehicles.  Toyota has sold over five million vehicles in Canada through a national network of 287 Toyota and Lexus dealerships.  Toyota is dedicated to bringing safety, quality, dependability and reliability in the vehicles Canadians drive and the service they receive.  TCI’s head office is located in Toronto, with regional offices in Vancouver, Calgary, Montreal and Halifax and parts distribution centres in Toronto and Vancouver.  Toyota operates two manufacturing facilities in Canada. Having produced more than seven million vehicles, popular Canadian models built at these facilities include Toyota RAV4, Toyota Corolla, Lexus RX 350 and RX 450h hybrid.

The 2030 Energy Policy sets out a vision that has been designed to rally opinions. It presents a number of ambitious targets that consumers of all types, from individual citizens to corporate enterprises, are either asked to achieve, or from which they will derive direct benefits. It also describes how the Government will support consumers through the steps of the energy transition. It is a form of energy pact, put forward by the Government to bring about a major change in Québec’s energy profile by the year 2030. For further information, please see politiqueenergetique.gouv.qc.ca

Office of the Minister of Energy and

Responsible for the Plan Nord