Toyota in Canada Steps Up To Support Flood Relief Efforts in British Columbia with a Combined Donation of More than $150,000 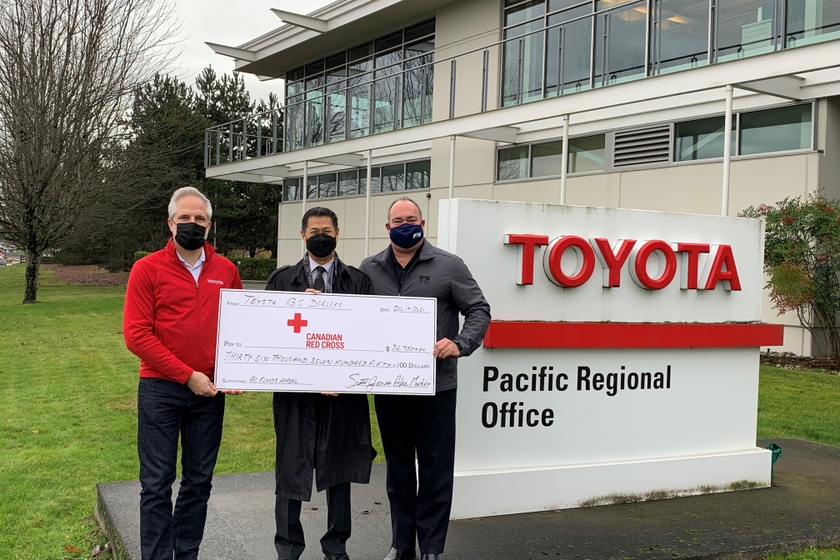 TORONTO, Ontario – December 21, 2021 - Severe rainfall and floods suddenly impacted the lives of many British Columbians, prompting Toyota in Canada to step up and support with a combined donation of $151,750 to Canadian Red Cross and its British Columbia Floods and Extreme Weather Appeal.

Through the help of volunteers and staff, Canadian Red Cross provides emergency support services; this could include lodging, basic needs such as food, and emotional support to people and families who have had to flee their homes in the face of flooding and extreme weather.

“The thoughts of the Toyota family are with the residents of B.C. – including our customers, dealers, employees and communities - as they come together to overcome this disaster,” said Larry Hutchinson, President and CEO of TCI. “We feel it’s important to support the ongoing efforts of organizations like Canadian Red Cross as they work to provide shelter, essential resources and other support for the people who’ve been affected by the recent floods.”

While contributions came from all levels within Toyota in Canada, one dealer, Penticton Toyota, stepped up to further support their community by purchasing $1,500 worth of diesel fuel for Westhill Aggregates, an organization that was instrumental in coordinating flood cleanup efforts in Princeton, B.C. The dealership also participated as a receiving centre to collect shovels, heaters and lamps that assisted with clean-up efforts in the community.

“Throughout the year, Toyota Dealers actively support their local communities and when an event so significant as the B.C. Floods occurs, we come together as an Association to provide assistance to our people, customers and communities,” says Scott Jones, President, BC Toyota Dealers Association. “We are pleased to support the Canadian Red Cross and their team of volunteers who are on the ground providing essential resources and relief efforts to the residents or British Columbia.”

Learn more about Toyota in Canada’s support to the Canadian Red Cross, here. Canadians who are able to contribute are encouraged to make a financial donation to the British Columbia Floods and Extreme Weather Appeal by calling 1-800-418-111 or online at  https://www.redcross.ca/.