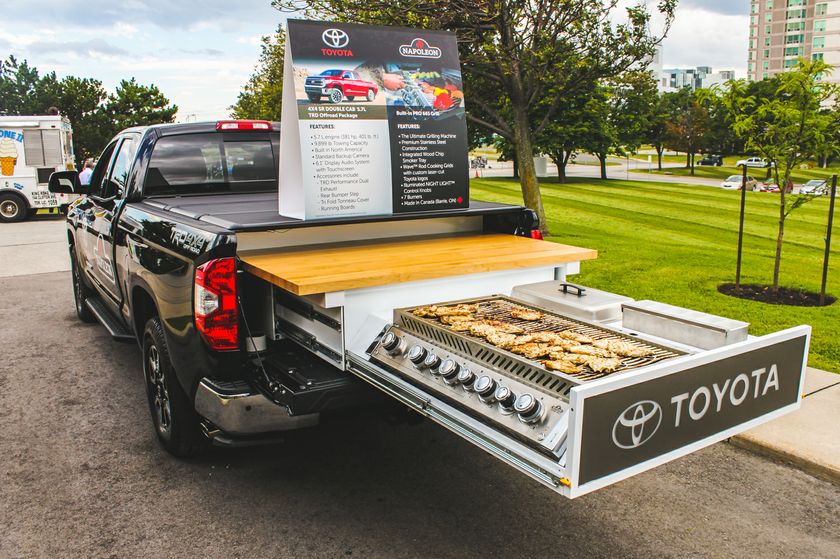 TORONTO, ON., August 7, 2015 – From Ribfest in Toronto to Poutine Fest in Montreal to Ag in Motion in Saskatoon, a special Toyota Tundra tailgating vehicle with a barbeque installed on its bed has been adding extra sizzle to summer events across the country.

Partnering with Napoleon – a Canadian grill, fireplace and HVAC manufacturing company – two special Toyota Tundra tailgating vehicles were created. One will be visiting events in eastern Canada and one in the west.  Whether just for display or fired up for use, it’s proven to be quite the showstopper wherever it’s headed.

“The Toyota Tundra is known for being up to the task for anything Canadians throw at it, and it has certainly proven to be ideal for this special tailgating vehicle,” said Stephen Beatty, Vice President, Toyota Canada Inc., referring to the fact that among the truck’s many strengths is an 8.1-foot bed that can handle a multipurpose setup that includes a grill, prep table and condiment area that Napoleon custom-created.

The tailgating Tundras have a full list of appearances scheduled throughout the rest of the summer and fall. During the month of August, the vehicles will be on display at: