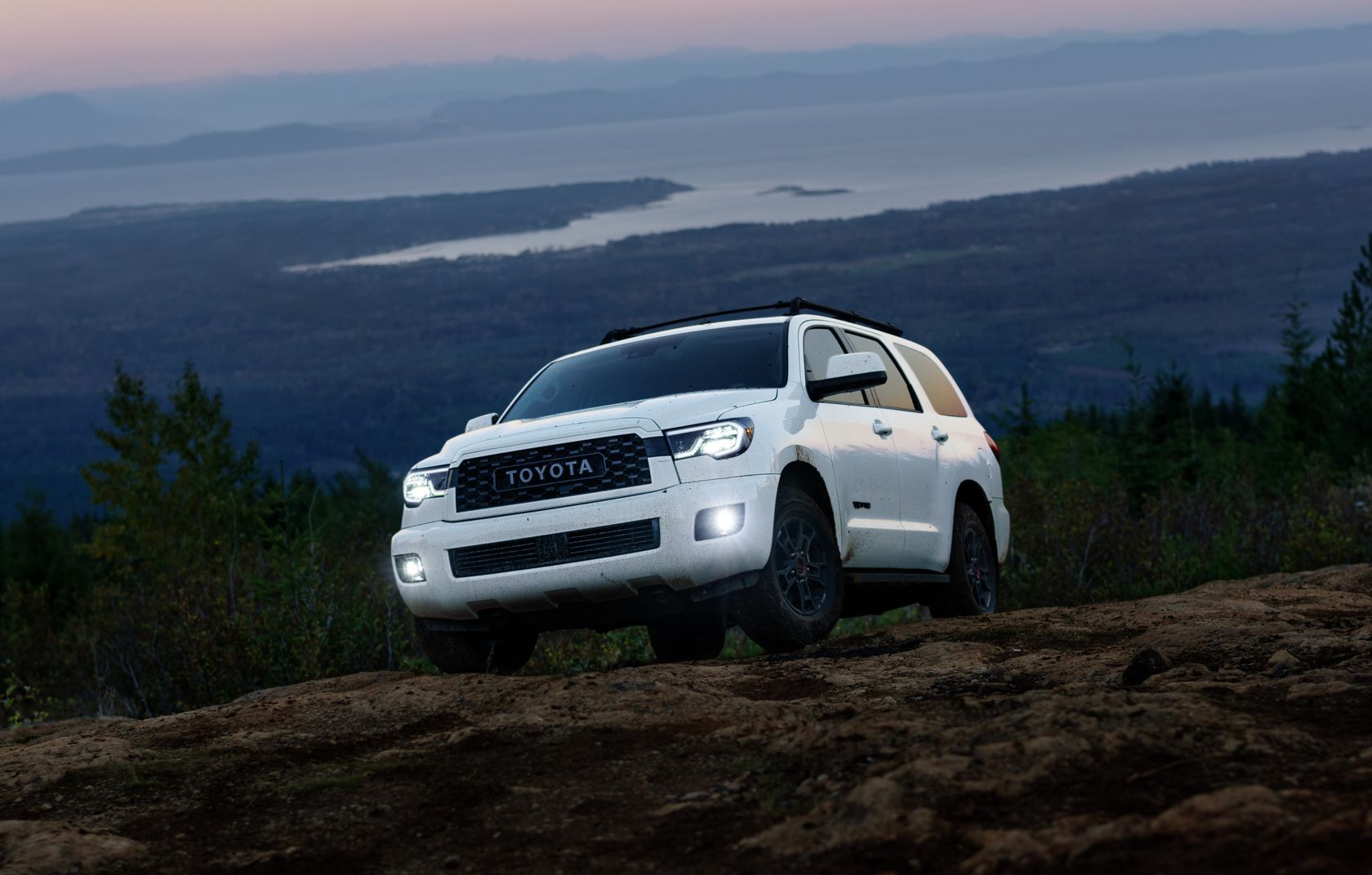 TORONTO, ON – FEBRUARY 7, 2019 – Outdoor adventure for seven is about to go farther off the beaten path than ever with the 2020 Toyota Sequoia TRD Pro, unveiled today at the Chicago Auto Show. With a chassis fortified by a TRD-tuned Fox shock absorber suspension, plus an array of proven off-road equipment specially designed or selected by Toyota Racing Development engineers, the full-size Sequoia TRD Pro offers room for the whole family and an affinity for thrills.

The 2020 Sequoia joins a roster of TRD Pro vehicles that includes the Tacoma mid-size and Tundra full-size pickups and 4Runner SUV. Introduced in 2014 in the United States, the TRD Pro lineup emerged from Toyota’s rich off-road racing heritage. The TRD Pro badge signifies a vehicle that’s capable of going where ordinary pickups and SUVs fear to tread, while still retaining the comfort for daily driving.

With its robust body-on-frame construction, four-wheel independent suspension, generous ground clearance and powerful V8 engine, the Sequoia is already one of the most capable full-size SUVs on the market. The TRD Pro version comes standard with Multi-Mode 4WD, which is optional in other Sequoia grades.

A preeminent maker of off-road suspension components, Fox has supplied off-road enthusiasts and racers with pavement-escaping options for decades. The aluminum-bodied internal bypass shocks employed on the 2020 Sequoia TRD Pro, and all TRD Pro models, are tuned by TRD engineers specifically for each truck or SUV’s unique attributes.

Compared to external-bypass shocks used on off-road race vehicles, the Fox internal bypass shock compactly integrates bypass zones inside the shock body, which allows the shock’s fluid to bypass the piston through regulated ports as it moves through its travel. Providing a cushioned ride during typical driving, the Fox shock damping gets progressively firmer through the shock piston’s stroke to resist bottoming over rough trail surfaces.

The tuning on each TRD Pro’s shocks is unique, and the front 2.5-inch Fox shocks on Sequoia include 7 compression zones and 2 rebound zones. TRD engineers reduced the front spring rate on Sequoia TRD Pro to improve its off-road compliance. The front shocks also provide an increase in rebound travel of 18mm.

Standing Out on Dirt and Pavement

The TRD Pro cabin treatment mixes ready-to-get-dirty function with luxury, because there’s nothing wrong with a little comfort out on the trail. Black TRD Pro leather-trimmed seats with red contrast stitching and “TRD Pro” stitched into the front headrests are comfortable and durable, while TRD Pro all-weather floor mats add bring-it-on cabin protection.

Like all Sequoia models, the TRD Pro offers just one powertrain -- emphasis on power. The DOHC 5.7-litre i-FORCE V8, which uses regular-grade gasoline, produces 381-horsepower and 401 lb.-ft. of torque. It’s teamed with a six-speed electronically controlled automatic transmission. Notably, the big V8 produces 90 per cent of its peak torque at a low 2,200 rpm, a boon to towing. Compliant with the SAE J2807 towing standard, the Sequoia TRD Pro can tow up to 7,100 lbs. and features an integrated tow hitch, Driver-selectable Tow/Haul transmission mode and Trailer Sway Control.

The standard Multi-Mode 4WD system uses a lockable TORSEN limited-slip center differential to apportion torque to the front and rear wheels, and a two-speed transfer case provides a low range ratio for tackling steep off-road trails. Low range is accessible on the fly via a rotary knob, while the center differential locks at the push of a button.

The 2020 Sequoia TRD Pro is available exclusively as a 7-seat model, featuring middle-row captain’s chairs and a three-across third-row seat with 60/40 split backs that also recline. And there’s plenty of room for all. Second-row legroom stretches 40.9 inches, while the third row offers adult-size 35.3 in. legroom.

Carry lots of gear? The Sequoia TRD Pro can handle it. With both third-row seat backs folded flat, there’s 66.6 cu. ft. of carrying space, enough to haul camping gear for four. With the second-row seatbacks also folded, the space increases to a cavernous 120.1 cu. ft., enough for a long camping trip. The Sequoia can even carry objects up to 11 feet long, provided the maximum weight is not exceeded. The liftgate has a versatile separate power window, with auto up/down and jam protection.

TRD Pro Upgrades All Around for 2020

The Sequoia TRD Pro leads a lot of “new” across the TRD Pro family for 2020. All TRD Pro models feature upgraded multimedia systems that include Android Auto™, Apple CarPlay™, and Amazon Alexa™ compatibility. The Tundra, Tacoma and 4Runner TRD Pros will all rely on an 8-inch touchscreen, while the Sequoia TRD Pro will feature a 7-inch touchscreen. In addition, all grades of 2020 Sequoia, Tundra, 4Runner and Tacoma will utilize this updated audio system, though screen size may vary between models.

The Sequoia and Tundra CrewMax TRD Pro are upgraded to feature the top-level multimedia system with JBL Premium Audio and Navigation, a feature still standard in both 4Runner and Tacoma TRD Pros.

Speaking of Tundra TRD Pro, for 2020 it will be offered in both Double Cab and CrewMax configurations.

The Tacoma TRD Pro shows the world an even tougher stance with unique sequential LED/DRL headlamps and LED foglamps, along with a new 16-inch wheel design and black-insert taillamps. The driver gets a new 10-way power seat, and Smart key function is added to the passenger door.

Toyota bolstered functionality for the 2020 Tacoma TRD Pro, as well. Ever wished you could have seen a trail obstacle before it was too late? The Tacoma TRD Pro shows the way – quite literally. New for 2020, Panoramic View Monitor (PVM) + Multi Terrain Monitor (MTM) provides selectable front, side, or rear views for around and under the vehicle. An available LED bed lamp offers brighter illumination.

The 2020 4Runner TRD Pro is distinguished by a new grille design, as the lower section houses the radar sensor for Toyota Safety Sense-P (TSS-P), which is standard for all 4Runner grades for the 2020 model year.