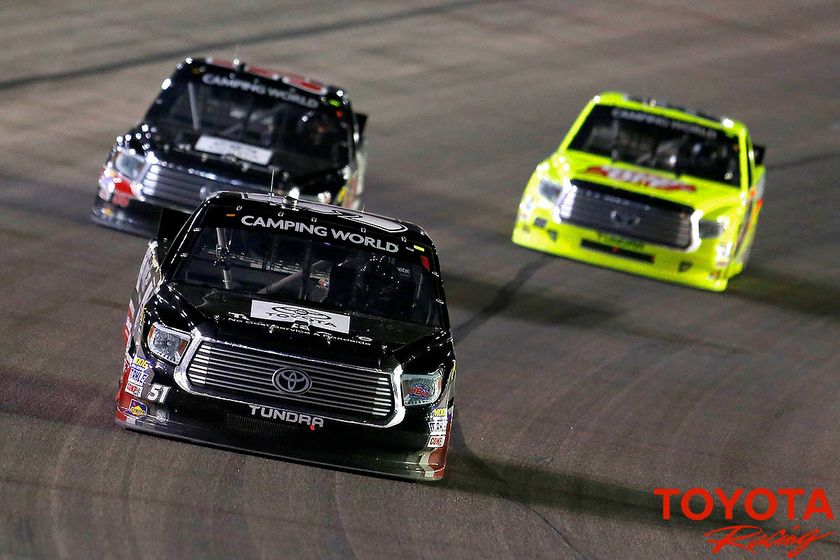 Toyota remains the series’ top manufacturer after previously winning last year’s title (2013) and prior to that a record five straight NCWTS manufacturer’s championships from 2006 to 2010.  Overall, this is the 10th time Toyota has earned a NASCAR manufacturer’s trophy since the start of the 2004 season.  Toyota also earned three consecutive NASCAR Nationwide Series (NNS) manufacturer’s crowns from 2008 to 2010.

Highlights from the season include Tundra drivers establishing a new series record by winning the first 10 races of the year -- from Daytona in February to Eldora in July -- and a 12-race winning streak dating back to the final two races of 2013.

Busch has made the most trips to victory lane this season with seven first-place trophies (Daytona, Kansas, Charlotte, Dover, Kentucky, Chicago and Texas) while Wallace has earned three wins this year (St. Louis, Eldora and Martinsville) in a KBM Tundra.  Two Tundra drivers have each recorded a pair of wins this season -- Crafton (Martinsville and Texas) and Erik Jones (Iowa and Las Vegas).  Sauter (Michigan) and Timothy Peters (Talladega) each have one victory in their Tundras this season.

Of this year’s 16 Tundra wins, 12 have been by KBM drivers -- Busch, Jones and Wallace -- which matches the most by a team in a single season.  This year, KBM is also looking to earn a third owner’s championship in its fifth year competing in the series.

A total of 23 different drivers have participated in the Camping World Truck Series in Tundras this year, including six -- Jeb Burton, Crafton, Peters, German Quiroga, Sauter and Wallace -- who have competed in all 20 events driving Toyotas.

The 16 Tundra wins this season is the most victories by Tundra drivers in a single year, surpassing the 15 set in 2010.

Since joining NCWTS competition in 2004, Toyota has won 128 races and captured 98 poles in 264 races.  Busch (36) has the most victories driving a Tundra.

There are two more races remaining on this year’s NCWTS schedule, including Phoenix International Raceway (Nov. 7) and the season-finale at Homestead-Miami Speedway (Nov. 14).