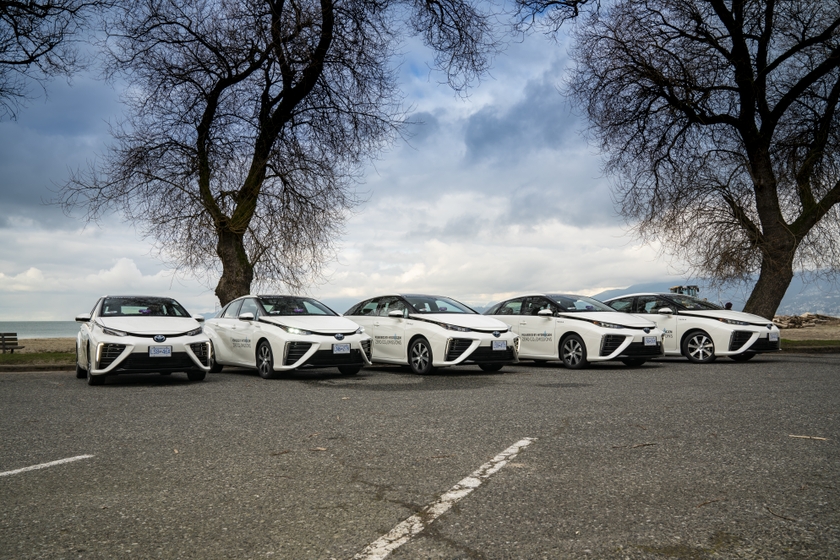 “Lyft’s mission is to improve people’s lives with the world’s best transportation, and to achieve this, we need to make transportation more sustainable,” said Peter Lukomskyj, General Manager, Lyft in B.C. “This partnership will better serve current drivers and those who don’t have a vehicle but want to drive with Lyft for supplemental income, while moving us toward our goal of reaching 100% electric vehicles on the platform by 2030.”

Through the partnership, eligible drivers on the Lyft platform can access a Toyota Mirai sedan through the KINTO Share Canada app and pick it up at one of three Toyota dealerships across the Lower Mainland. The weekly rental rate is $198 per week + taxes and fees, and includes insurance, scheduled maintenance and unlimited kilometres*.

The Toyota Mirai is the world’s first mass production hydrogen fuel cell electric vehicle. One of many components of Toyota’s overall carbon reduction strategy, the hydrogen-powered, zero-emission Mirai fuels in approximately five minutes, offers up to 500km of range and emits only water from its tailpipe. As a zero-emission vehicle, it’s also eligible to use BC’s HOV lanes.

Recently, Canada’s federal government released its Hydrogen Strategy for Canada, setting an ambitious framework to make Canada a global hydrogen leader. Additionally, British Columbia promoted hydrogen in the 2018 CleanBC plan and the 2019 Hydrogen Study, with an emphasis on transportation fuels including fuel-cell electric and other zero-emissions vehicles.

“Reducing emissions from transportation is a critical part of our plan to create a cleaner, healthier future for our children and grandchildren,” said The Honourable Jonathan Wilkinson, Minister of Environment and Climate Change, P.C. M.P. “The Government of Canada is pleased to see collaborations like this one between Lyft Canada and Toyota Canada, which will not only benefit our environment, but also help position Canada as a world leader in the uptake of hydrogen technologies.”

“Hydrogen will play a significant role in B.C.’s clean energy future, generating environmental and economic benefits across the province,” said Bruce Ralston, Minister of Energy, Mines and Low Carbon Innovation. “This new partnership will help demonstrate these benefits, move us toward our CleanBC goals and put B.C. on the road to a clean energy future.”

“Hydrogen BC is about collaboration with the private and public sectors to accelerate our transition to a new zero emission paradigm,” said Colin Armstrong, Chair of Hydrogen BC and CEO of HTEC. “This collaboration is a market changing event that will rapidly increase the amount of hydrogen and fuel cell electric vehicles in operation. The KINTO Share program will also allow vast numbers of people to experience these vehicles first hand.”

About Lyft in Metro Vancouver

Lyft has been operating in Metro Vancouver since January 24, 2020. Over the past year and throughout the pandemic, the transportation network company has partnered with over 10 local organizations, including Surrey Food Bank, Women Against Violence Against Women and Hospital Employees Union to provide access to free ride credits for essential rides. Since launch, Lyft has worked with Covenant House Vancouver on a LyftUp program that allows riders to roundup their ride payment to the nearest dollar and donate the difference to a worthy cause.

KINTO Share is a proof-of-concept car-sharing service launched by Toyota Canada Inc. and Toyota Credit Canada Inc., with participating Toyota dealerships in Ontario now offering hourly rental vehicles for their service customers. Whether they need it for a few hours to run some errands while their vehicle is in for regular maintenance - or for a few days while more significant work is being done - their dealership service advisor can help them reserve the low-carbon hybrid electric vehicle that best meets their short-term needs. Each vehicle is fully cleaned and sanitized between users, and a smartphone application unlocks and becomes the key for the vehicle, making it a safe, seamless and contactless experience for the customer. The KINTO Share app is not affiliated with Lyft, Inc. For more information, please visit www.kintoshare.ca.

Toyota Canada Inc. (TCI) is the exclusive Canadian distributor of Toyota and Lexus vehicles.Toyota has sold over six million vehicles in Canada through a national network of 287 Toyota and Lexus dealerships. Toyota is dedicated to bringing safety, quality, dependability and reliability to the vehicles Canadians drive and the service they receive. TCI’s head office is inToronto, with regional offices in Vancouver, Calgary, Montreal and Halifax, and parts distribution centres in Clarington and Vancouver. Toyota also operates two manufacturing facilities in Canada. Having produced more than nine million vehicles, popular Canadian models built at these facilities include Toyota RAV4, Toyota RAV4 Hybrid, Lexus RX 350 and RX 450h hybrid. Recent investments at its facilities in Ontario will allow for increased production of the top-selling Toyota RAV4 and RAV4 Hybrid models for the North American market.

Hydrogen BC is the regional branch of the Canadian Hydrogen and Fuel Cell Association (CHFCA) in British Columbia. Established with the support of the BC Government, Hydrogen BC is comprised of a public-private partnership with the mandate to promote the rollout of fuel cell electric vehicles (FCEVs) and hydrogen fueling stations (HFS) in the province. In addition, Hydrogen BC works to ensure safe operation of HFS & FCEVs by sharing best practices developed in Canada and abroad while working with other industries to forecast demand for low-carbon hydrogen.