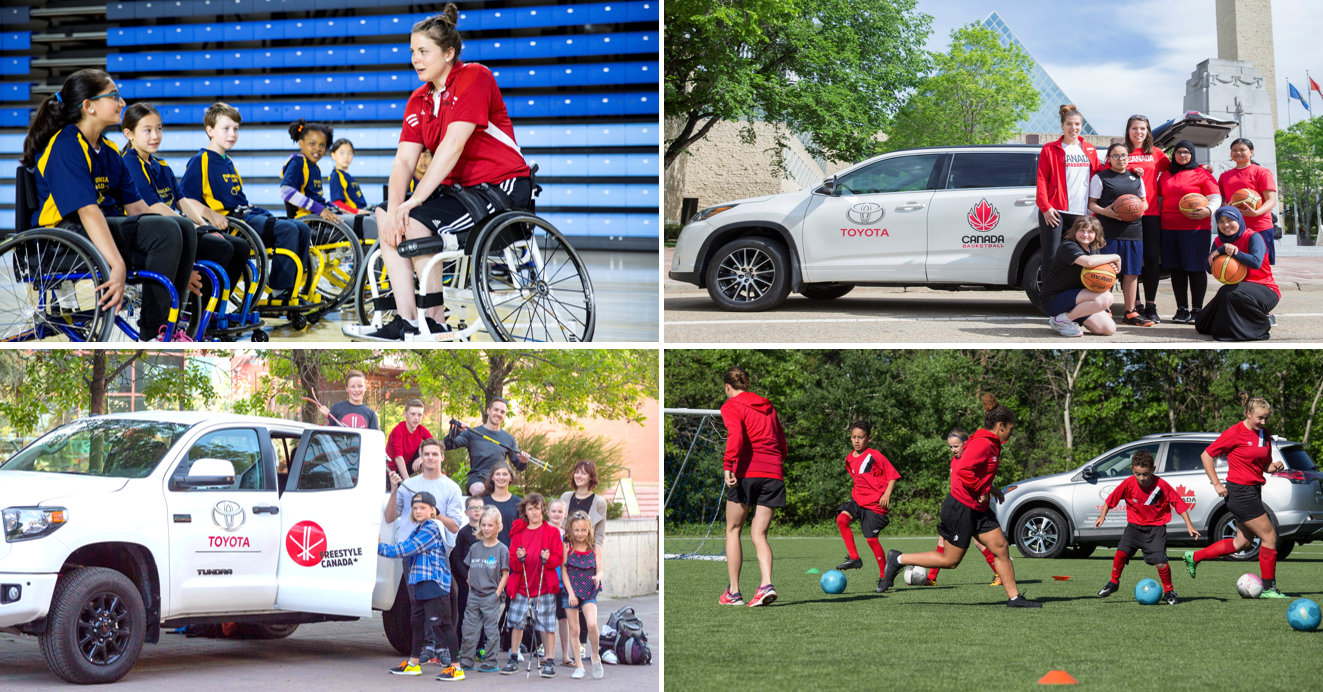 Through these four new partnerships, Toyota is hoping to help encourage and enable more Canadians to experience the joy and excitement of participation in sport. As a sponsor, the company will support elite level athletes and national teams, as well as the development of various grassroots sports initiatives.

“Sports inspire people to overcome barriers and to get moving,” said Cyril Dimitris, Vice President, Sales and Marketing, Toyota Canada Inc. “Becoming the Official Mobility Sponsor of these four National Sport Organizations is part of Toyota’s vision of an inclusive society in which all people can participate.”

As Official Mobility Sponsor and Official Vehicle of Canada Basketball, Toyota Canada will encourage and celebrate the next generation of basketball talent in Canada. Toyota will also Sponsor all eight of the Canadian National Teams, including the Senior Men’s and Women’s teams, as well as the development, U-16/U-17 and U-18/U-19 age-groups.

“Toyota’s sponsorship will help us continue to foster the growth and development of basketball across the country – from grassroots programming to our national teams,” said Michele O’Keefe, President & CEO, Canada Basketball. “These types of partnerships enable us to take our organization from good to great through increased awareness of the game, enhanced program delivery, and continued investment in podium performances.

As a Primary Partner of Canada Soccer, Toyota Canada will support all 12 of Canada Soccer’s National Teams, including the Senior Men’s and Women’s National Teams and Canadian Para Soccer Team. Toyota will also become the Title Sponsor for the U-15, U-17, and Senior National Championships, and will be a Primary Partner of the Canadian Championship. The partnership will also see Toyota contribute to Canada Soccer’s ongoing grassroots development efforts to grow the game from coast to coast through ‘Active Start Soccer Festivals.’

Toyota Canada will also be supporting an important part of our country’s deep Winter sports heritage as a Tier 1 Partner of Freestyle Canada. As the Official Mobility Sponsor and Official Vehicle of Freestyle Canada, Toyota will contribute to the execution of the organization’s domestically hosted international competitions as Presenting Sponsor of the FIS Freestyle Ski World Cup events in Quebec and Alberta. The partnership also supports future generations of freestyle skiing athletes with Title Sponsorship of the Canadian National Championship events and World Cup Community Days.

"Corporate partner support is critical to Freestyle Canada's ability to deliver the highest quality programs and services to our athletes, coaches, and clubs across Canada,” said Bruce Robinson, CEO of Freestyle Canada. “We are committed to providing best in class events like our Canadian Freestyle Ski Championships, Canadian Freestyle Ski Junior Championships, and the Canada Cup series, and support from great companies like Toyota Canada are key to these endeavours.”

As the Official Mobility Sponsor and Official Vehicle of Wheelchair Basketball Canada, Toyota Canada will support all four National Team programs, and will be the Presenting Sponsor of the organization’s Hoopfest event. Toyota will also become a Presenting Partner for the National Academy, maintaining a close tie to the training and development of high performance wheelchair basketball athletes. The National Academy at the Pan Am Sports Centre is the world’s first dedicated, year-round, daily training facility for wheelchair basketball athletes.

“The support of partners like Toyota is essential in positioning Canada as the world leader in the sport of wheelchair basketball,” said Wendy Gittens, Executive Director of Wheelchair Basketball Canada. “As a National Team program partner, Toyota Canada supports the holistic development of our athletes, ensuring we can provide world-class training opportunities so that Canada remains at the forefront of research and innovation that drives the evolution of the game.”

Canada Soccer, in partnership with its membership and its partners, provides leadership in the pursuit of excellence in soccer, both at the national and international levels. Canada Soccer not only strives to lead Canada to victory, but also encourages Canadians to a life-long passion for soccer. For more details on Canada Soccer, visit the official website at www.canadasoccer.com.

Since 1981, Freestyle Canada has been developing Olympic and World Champions in the freestyle disciplines of aerials, moguls, halfpipe and slopestyle skiing. With the support of our valued corporate, private and government partners, we will continue to build on our rich history of success, delivering freestyle skiing programs that inspire athletes from all across Canada to harness their courage, go for their dreams and become who they aspire to become. For more information, please visit www.freestylecanada.ski.

Wheelchair Basketball Canada is the national sport governing body responsible for the organization of the sport in Canada. It is a non-profit, charitable organization that is committed to excellence in the development, support and promotion of wheelchair basketball programs and services for all Canadians from grassroots to high performance. For more information, please visit www.wheelchairbasketball.ca.